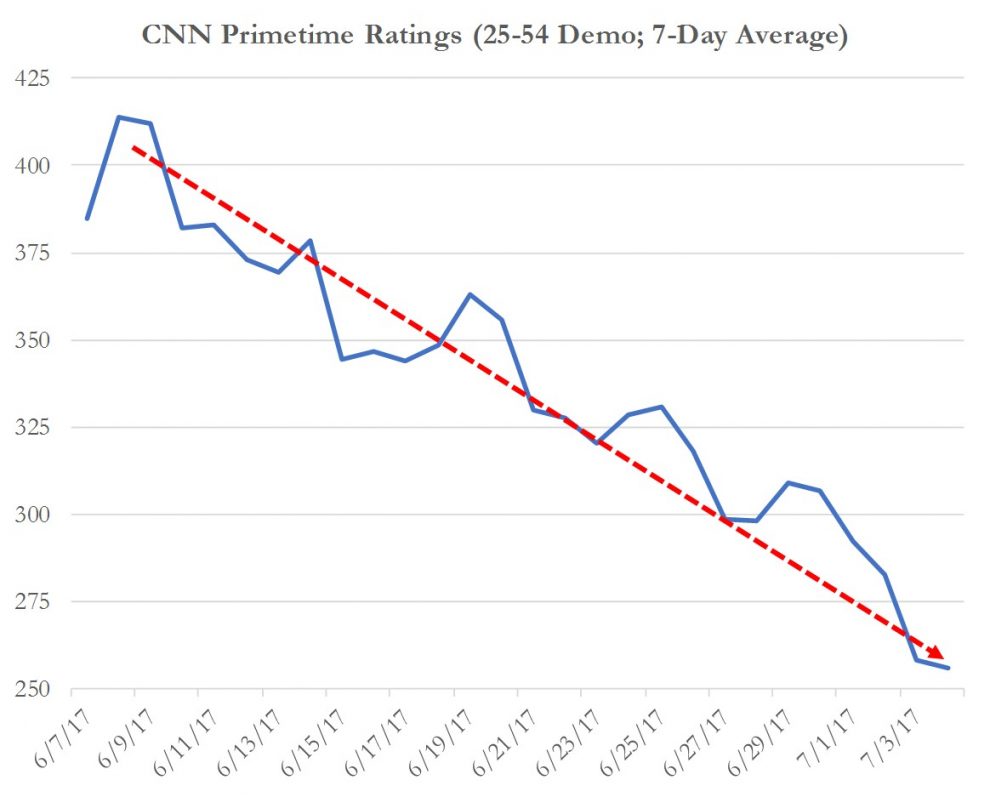 Even more than usual, some ten days ago the far-left CNN launched a 24/7 jihad against President Trump, going so far as to question his mental health, his patriotism, blaming him for a mass murder in New Zealand, and serial lying about his response to Charlottesville. But this unhinged hate campaign obviously turned off a considerable number of Americans.

When compared to this same week last year, CNN lost -16 percent of its primetime viewers and -17 of total day viewers; young people ran away screaming: In the advertiser-coveted 25-54 age demo, CNN shed an incredible -31 percent of those viewers during primetime and -29 percent in total day.

CNN’s numbers look especially bad when compared to its direct competition during this same time period.

Here are the stark numbers:

To put things in more perspective, in all of cable TV during primetime, Fox News hit number one, MSNBC number three (ESPN was number two), and CNN bottomed out at eleven.

During primetime, as you can see above, CNN cannot even average a million voters in a country of 330 million during a never-ending news cycle that is always turned up to 11.

For all of MSNBC’s flaws, and there are many, at least Democrats are not played for fools by that far-left outlet. Unlike CNN, which insults its audience with its laughable pose as objective, MSNBC makes no secret of its left-wing biases.

And for all of Fox’s flaws, and there are many, the fair and balanced network draws a sharp line between its opinion and news programs.

CNN, however, is a total shit show of shrill neuroses, fake news, full-blown lies, violence,and unbridled hate. Watching CNN is like watching an ex-husband seethe about his ex-wife all day and all night. There’s no insight from CNN, nothing interesting is ever passed along, and it certainly isn’t informative. CNN has not broken a consequential story in over a year — at least not one that didn’t turn out to be fake news.

Also, CNN is horribly produced. Politics aside, when compared to MSNBC and Fox News, the overall production of CNN is just terrible. The last place outlet’s look and presentation is both dull and repetitive.

Another massive problem at CNN is its lack of stars. There is no one to build an audience around, no anchor anchoring its primetime. MSNBC has Rachel Maddow, who single-handedly saved the network. Fox News has Sean Hannity and Tucker Carlson in the opinion column and the great Brett Baier’s Special Report, which remains the best straight news show in all of TV.

CNN has no one.

My guess is that CNN put Jake Tapper at 4 p.m. in the hopes he would draw people in that would remain throughout the night, which was a great idea in theory. The problem, though, is that this once widely-respected newsman has been snake bit by CNN chief Jeff Zucker, which turned Tapper himself into poison, most especially ratings poison. Tapper is now just another lying, deceitful CNN virtue signaler — a real shame that has come at a real loss.

Chris Cuomo’s move to CNN primetime, at the expense of one of Anderson Cooper’s hours, was always a terrible idea. Cuomo is not terribly bright, is way too enamored with violence, holds some troubling views about child sexuality, and just doesn’t wear well. After a couple of viewings, Fredo’s debate style is exposes him as a one-trick pony. There’s no depth there, just his memorized, left-wing talking points.

Cuomo’s done nothing to lift CNN’s primetime woes, which remain insurmountable at this point. The network is a national laughingstock and only a total housecleaning could begin to repair the damage.