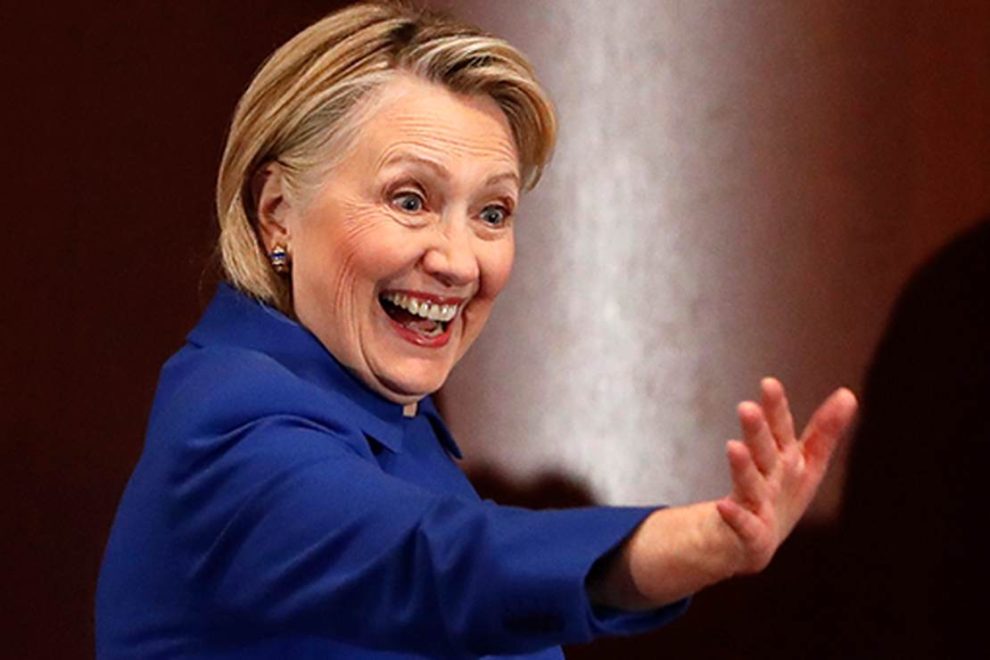 Well, this was inevitable: Hillary Clinton will be running for president in 2072 when she is 125 years old and her head is being kept alive in a bubbling vat of nutrients, so why not 2024? While touting a third-times-a-charm run for the twice-failed presidential candidate, however, CNN’s appalling Chris Cillizza seemed a bit lukewarm to the idea. He led off his pitch by attributing it to someone else: “In the immediate aftermath of the Supreme Court’s monumental decision to overturn Roe v Wade, conservative writer John Ellis took to the internet to make a provocative case: It was time for Hillary Clinton to make a(nother) political comeback.” Well, sometimes it’s time for cardiac catheterization or root canal, so theoretically there could be a time for a Hillary comeback as well.

Cillizza quoted Ellis’s writing: “Now is her moment. The Supreme Court’s decision to overturn Roe vs. Wade creates the opening for Hillary Clinton to get out of stealth mode and start down the path toward declaring her candidacy for the 2024 Democratic presidential nomination.” Cillizza didn’t mention it, but Ellis subtitled his article “Furies unleashed.” He could even have said “harpies.”

Digging deeper, Cillizza noted that Ellis’ argument was “centered on the ideas that 1) President Joe Biden, who will be 82 shortly after the 2024 election, is simply too old to run again (Ellis is far from the only person making that case) and 2) The Democratic bench is not terribly strong.”

Could there possibly be weaker arguments for a new round of Hillary posturing and pandering and pretending to be a warm, compassionate human being with a purse full of hot sauce? Hillary is hardly the youthful alternative, brimming with Kennedyesque vigah, to the superannuated Democrat establishment that Old Joe Biden represents. Biden will be 82 shortly after the 2024 election, and Hillary will be 77 shortly before it. Oh, yeah, young Hillary is going to be out there playing touch football on the lawn at Hyannisport, all right. And while Biden does represent a Democrat establishment that has long passed its prime but is so corrupt, opportunistic, and greedy that it clings to power at all costs, Hillary is hardly a fresh-faced outsider. She is just as much a part of that establishment as Old Joe is, if not even more so.

But Cillizza and Ellis are right about one thing: the Democrat bench is terribly weak. If Old Joe is still on this earth in 2024, and the country is not entirely a smoking ruin, and the Democrats decide to go with him again, it will be in large part because Kamala Harris is a cackling nonentity and there is simply no one else. If Hillary reemerges from the murky depths and dusts off her own cackle, it will be attributable to this lack of credible challengers within the party.

Democrat loyalists are trying to put a positive face on this fiasco. Cillizza assures us that John Ellis is not the only person touting Hillary 2024. Oh, there are two? “Democratic pundit Juan Williams,” Cillizza says, “makes the case that Clinton should become a major figure on the campaign trail this year.” Williams actually tries to bring some enthusiasm to this pending train wreck: “Clinton is exactly the right person to put steel in the Democrats’ spine and bring attention to the reality that ‘ultra-MAGA’ Republicans, as President Biden calls them, are tearing apart the nation. Keep talking and talk louder, Hillary!” Yeah. Ultra-MAGA Republicans are tearing apart the nation. It’s ultra-MAGA Republicans who have sent gas prices through the roof, erased the Southern border, emptied the supermarket shelves, and all the rest. Not Old Joe, not Putin: ultra-MAGA Republicans. And Hillary is tanned, rested, and ready to save the day.

Cillizza does, however, include a sour note: “That a conservative writer is leading the charge — at least at the moment — for another presidential bid by Clinton should be looked at with some healthy skepticism. No candidate unites the Republican party — even with Donald Trump as the GOP’s likely nominee — like Clinton does. So, this may be a bit of wishful thinking by Ellis. Keep that in mind.”

Not only that, says Cillizza, but Old Joe wants to stay in the Oval Office, and he is doing so well there, who could deny him another term? Cillizza also laments that his heroine “has been pretty close to Shermanesque in her denials about even considering another bid. ‘No, out of the question,’ Clinton said of another presidential candidacy in an interview with the Financial Times earlier this month. ‘First of all, I expect Biden to run. He certainly intends to run. It would be very disruptive to challenge that.’” However, Cillizza says, “we know that circumstances change. And that changed circumstances can lead to changed minds.”

Can you imagine the mindset of a human being who actually wants to see Hillary Clinton running for president again?