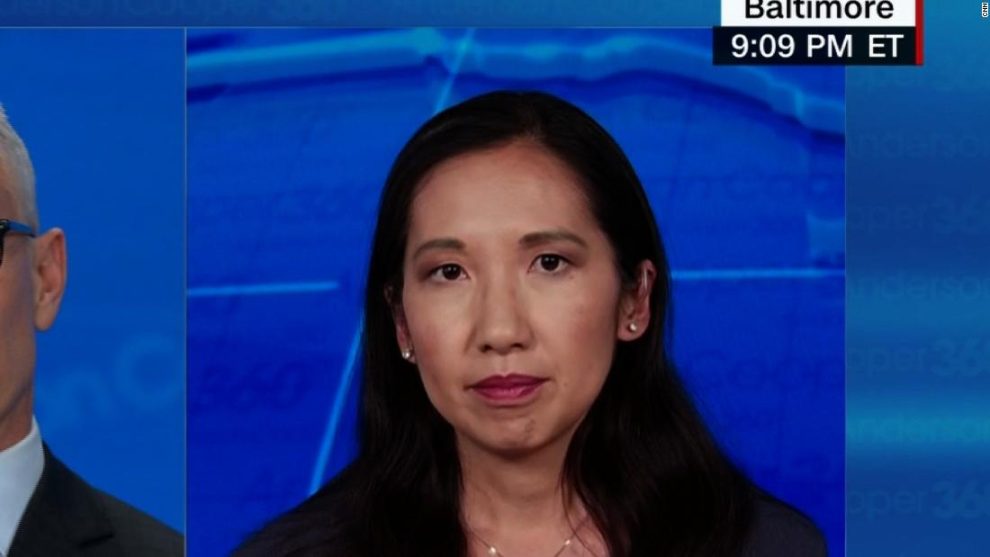 CNN medical analyst Dr. Lean admits the so-called science she demanded the public comply with has impaired her young son.

Wen championed mask and vaccine mandates throughout the pandemic, insisted children be forced to take PCR tests weekly until they are fully vaccinated and called for the unvaccinated to be banned from participating in society.

Just months ago, Wen, the former Commissioner of the Baltimore City Health Department and former head of Planned Parenthood, urged the Biden administration to “further restrict the activities of the unvaccinated.”

“I wish that [Biden] would go further to restrict the activities of the unvaccinated because they are the ones who are still spreading COVID and prolonging the pandemic for all of us.” she said in a December.

Wen has warned, “We can’t trust the unvaccinated” while blaming those who refrained from getting jabbed for a covid “surge.”

While peddling lies on the network that airs wall-to-wall coverage of propaganda promoting the hazardous experimental gene-modifying injections, Wen called for unvaccinated Americans to be banned from participating in society with undergoing forced PCR tests twice a week.

“It needs to be hard for people to remain unvaccinated,” Wen impugned last year. “Right now, it’s kind of the opposite.”

“It will be important to say, ‘Hey, you can opt-out, but if you want to opt-out, you have to sign these forms, you have to get twice-weekly testing,’” she added.

Wen was also adamant that children returning to school be forced to wear industrial-grade face masks and required to take weekly PCR tests until they are fully vaccinated.

Many of us saw through the lies surrounding covid from the start.

Others, like Wen, exploited people’s worst fears. The biowar provides them an opportunity to practice unhinged totalitarianism and make a fortune selling hate and lies.

But no one escapes karma.

In an op-ed published by the Washington Post, Wen confesses the “science” she and Big Brother demanded we trust is harmful and damaged her son’s cognitive development.

“I’m a doctor. Here’s why my kids won’t wear masks this school year,” the title of her editorial that was published on Tuesday states.

“Masking has harmed our son’s language development, and limiting both kids’ extracurriculars and social interactions would negatively affect their childhood and hinder my and my husband’s ability to work,” Wen admitted.

Many on Twitter have asked–how did I go from being extremely cautious with #covid19 precautions for nearly two years to now resuming pre-pandemic activities, including not masking my young kids at school?

I explain in this @postopinions column 🧵: https://t.co/3UGUxWvCH7

“With this new, indefinite time frame, the benefit-risk calculus of mitigation measures shifted dramatically. I was willing to limit my children’s activities for a year or two but not for their entire childhood,” she continued.

For many, it’s evident that a faceless society, where everyone wears germ-ridden pieces of fabric across their faces to no avail, would impede the emotional and cognitive development ability of formative young children.

Speech therapists have seen an alarming spike in the number of babies and toddlers patients who are speech delayed.

"For some kids, they can workaround the mask and still learn to speak perfectly fine, but for others, it can cause speech delays" pic.twitter.com/3YsWJIEpDU

Another study revealed how mean IQ scores of young children born during the pandemic have tumbled by as much as 22 points while verbal, motor and cognitive performance have all suffered as a result of lockdown.

A study published in the Royal Society Open Science journal found that lockdowns in the UK caused around 60,000 children to suffer clinical depression.

Figures show that 400,000 British children were referred to mental health specialists last year for things like eating disorders and self-harm.

“Children turning two years old will have been surrounded by adults wearing masks for their whole lives and have therefore been unable to see lip movements or mouth shapes as regularly,” states the report.

Another study out of Germany which found that the reading ability of children has plummeted compared to pre-COVID times thanks to lockdown policies that led to the closure of schools.

But Americans across the country continue mask up and to comply with lies told by tyrants like CNN analysts and Planned Parenthood while Google, which is partnered with the World Health Organization to stop the spread of covid misinformation, continues to buries facts in its search engine.

Wen’s op-ed detailing how mask wearing has harmed her son comes days after talk radio show host Dan Bongino revealed his decision to get covid vaccinated is ‘the greatest regret” of his life.