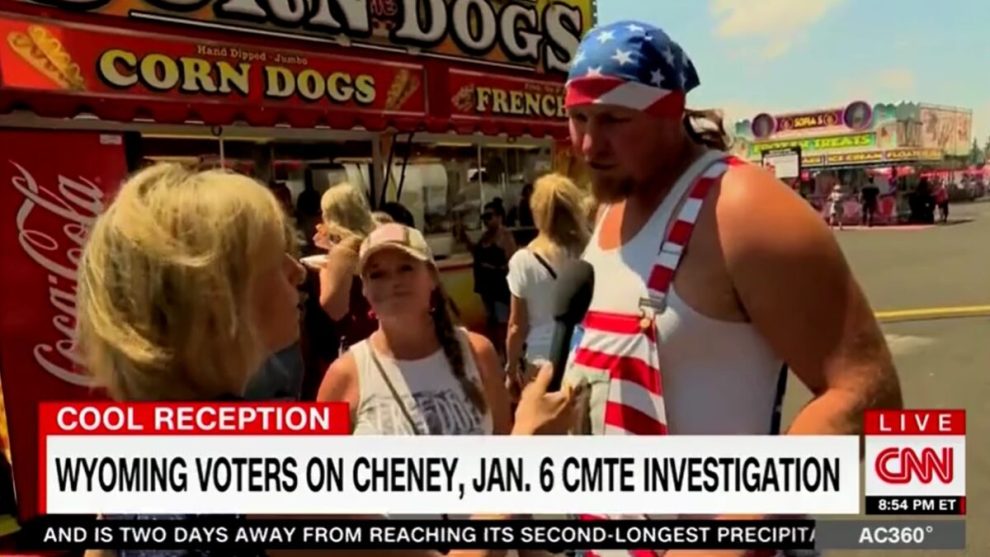 With just over two weeks to go before she faces voters in the Wyoming primary, it looks like Republican Rep. Liz Cheney is running on borrowed time.

Her participation in Nancy Pelosi’s kangaroo committee “investigating” the Jan. 6 Capitol incursion and open antipathy toward former President Donald Trump and his supporters have already marked her as endangered species among Republicans on Capitol Hill.

But when even CNN can’t find supporters when it looks for them, she’s really got problems.

That’s exactly what viewers saw last week when Randi Kaye, a reporter for CNN’s “Anderson Cooper 360,” went to the Frontier Days rodeo event in Cheyenne, Wyoming, to beat the bushes for Cheney backers in Wyoming’s capital.

It’s safe to say the results were not what the Cheney campaign or her slobbering supporters in the mainstream media wanted to see.

And even though Kaye managed to drum up two Cheney supporters before it was over, the whole video is brutal. Check it out here:

“Hell no!” and “Absolutely not” were some of the responses Kaye got from voters after she asked if they would support Cheney.

“She has been an embarrassment,” answered another, when asked her thoughts about the three-term congresswoman.

And her service on Pelosi’s grandiosely named “Select Committee to Investigate the January 6 Attack on the United States Capitol”?

“That’s a kangaroo court,” as one man put it. “That’s not the Wyoming way.”

See also  Kathy Griffin Destroyed Her Career with a Single Jab at Trump, Now She's Trying the Same Thing with Someone Else

Maybe Kaye got the message.

“Here in Cheyenne, more than 1,600 miles from Washington, D.C., almost everyone we spoke with told us they believe Liz Cheney is too focused on Donald Trump and the January 6 committee, and not paying enough attention to what they believe matters to the people here in Wyoming,” she said in her report.

And one thing that might matter to the people in Wyoming is that in 2020, they voted for Trump by an almost 70 percent majority. To have the state’s lone member of the House of Representatives then abandon both her party and her constituents by devoting her time to attacking Trump is a betrayal twice over.

And it’s one Cheney is already paying for.

The home-state party that censured her after she voted to impeach Trump in 2021 has essentially disowned her.

She’s losing badly in polls among Republicans to challenger Harriet Hageman, an attorney.

And, as Keye reported, her campaign has been reduced to begging Democrats to change their party registration to vote for Cheney in the Aug. 16 primary.

So, really, CNN’s findings are more entertaining than surprising. What’s interesting is that so many of the social media responses on CNN’s Twitter thread came from liberals accusing the network – accusing CNN! – of fixing the segment by conducting the interviews at the Frontier Days rodeo, as opposed to say, a university faculty lounge.

Fortunately, there are plenty of sane Americans around, even in the social media cesspool.

The actual voters of Wyoming are sick and tired of her!!! https://t.co/HmvmlZATWp

I don't ever watch CNN, nor repost anything they have to say, but this is absolutely priceless! I had to make an exception 😌 😏 ☺️ https://t.co/NNVvyyvCXC

And this one nails it:

CNN has discovered that a whole world exists outside the DC beltway, and the people @Liz_Cheney is supposed to be representing in Wyoming have strong feelings about her.

And it’s not good for Cheney.

Harriet @HagemanforWY will be the next congresswoman from Wyoming. https://t.co/Bh66U1mcAN

“CNN has discovered that a whole world exists outside the DC beltway, and the people @Liz_Cheney is supposed to be representing in Wyoming have strong feelings about her,” former Trump communications director Tim Murtagh wrote.

“And it’s not good for Cheney.”

And when a biased outfit like CNN goes looking for supporters for her and comes up largely empty, it’s looking worse all the time.

With just over two weeks to go before the primary that will decide her future, Cheney’s time might already be up.