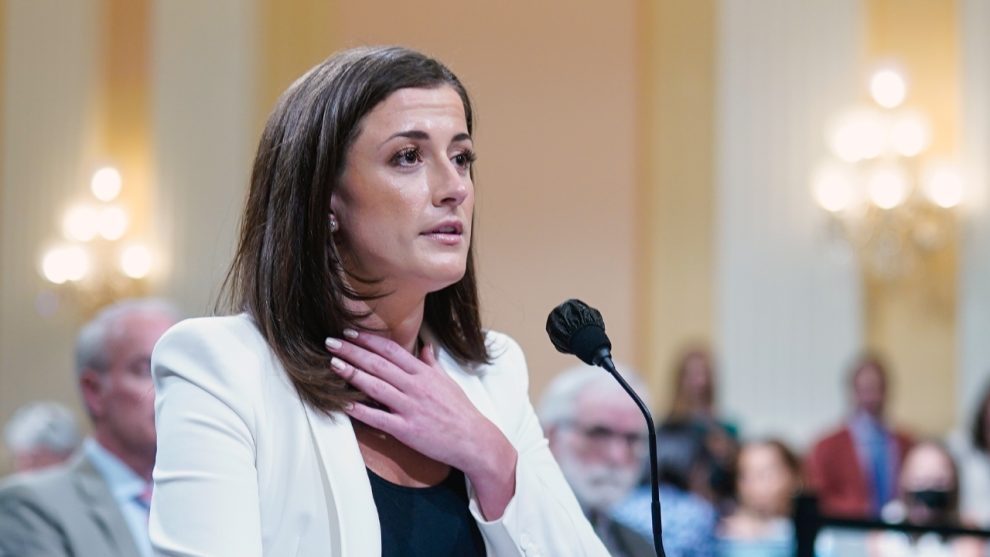 Before Cassidy Hutchinson put her right hand up, swearing to tell the truth, the media was announcing that her testimony would be a “blockbuster” and a bombshell on Trump.

All this, from a minor staffer? I was dubious but, like most, curious. Would she reveal that Trump used ranch instead of Catsup? Did Trump drink his sodas with one, or two hands? Her testimony was, in my opinion, on that level of sophistry. That didn’t stop the media from announcing, even during her testimony, that she was carpet bombing Trump. “Devastating,” cried the media.

She testified to multiple conversations that she claimed to have overheard. Each recollection of those conversations was prefaced with: “[He/she] said something to the effect of…” She was deposed before testifying to Liz Cheney’s leading questions. There was no opposing counsel to question her. There was no pushback, either in deposition or in public. That type of “kinda sorta” testimony isn’t worth much as evidence if ever presented as evidence at trial. But experts were quick to write 2,000 words defending her saying, in essence: “hearsay only counts in a court”.

She testified that Trump had violently climbed over a Secret Service agent, and grabbed the steering wheel of the “The Beast,” the Secret Service vehicle that is used to carried the president.

Bombshell! But…she wasn’t in the belly of the beast, she heard from someone who heard it had happened.

Bombshell! The Jimmy Olsens at the Washington Post and New York Times scurried to write Trump’s obit. He wasn’t fit for office! He endangered Secret Service agents! He’s a menace!

Hutchinson on what Trump wanted to do when he got to the Capitol on January 6: "There were discussions about him having another speech outside the Capitol before going in. I know that there was a conversation about him going in the House chamber at one point." pic.twitter.com/2Yno9eBlyY

But it never happened.

🚨 A source close to the Secret Service tells me both Bobby Engel, the lead agent, and the presidential limousine/SUV driver are prepared to testify under oath that neither man was assaulted and that Mr. Trump never lunged for the steering wheel.

Her testimony was also double hearsay and, it seems, it never happened. People with knowledge of “The Beast” were quick to point out that no president is able to climb into the driver’s compartment let alone over two Secret Service agents and grab the steering wheel. And, Trump wasn’t in “The Beast,” he was in an SUV. Double hearsay, triple oops.

The agents were willing to testify that it never happened. The guy whom Hutchinson claimed told her that yearn said he never told her any such thing. The media’s response? Well maybe it didn’t happen, but if any president would have done it, it would be Trump.

Ok, maybe that bomb was a dud but there more bombs to drop.

She testified about Trump throwing his meal against a wall and ketchup dripping down the wall. The media ate it up. Bombshell! See? Trump is a nut – he threw a plate against a wall! That revelation was a so-what. It wouldn’t be heard in court because it’s irrelevant.

She testifies about writing a critical note on January 6th at the behest of Mark Meadows. That note is written on the chief of staff’s notepad. But a lawyer named Eric Herschmann said that he wrote the note. On page 79 of the committee’s “final” report, the note is mentioned, but that page does not mention Hutchinson’s claim. She is footnoted. In the footnote, the committee claims that they looked at her handwriting and concluded it was consistent with Hutchinson’s.

Now, the committee is composed of handwriting experts.

Herschmann has said he had multiple witnesses who would verify that he was the author, not Hutchinson. I would think a handwriting expert could tell us who wrote the note, not the committee members. That “bombshell” turned into “cleanup on aisle J6”.

There’s a jury instruction that tells/instructs the jury – if they find a witness has lied in one part of the testimony, that the whole of his/her testimony is suspect.

It’s plain that the committee thinks that Hutchinson was a critical witness even though her testimony has massive credibility holes. They just don’t care.

Hutchinson may have [a] differing recollection of who wrote the note,” the important thing is that “both White House officials believed that the president should have immediately instructed his supporters to leave the Capitol building.”

No. The important part is the committee’s witness is a fabricator and isn’t useable as a witness, but that didn’t stop the committee from mentioning Hutchinson 21 times and quoting her testimony multiple times. The report said of Hutchinson:

Although Hutchinson’s bombshells either turned into wet firecrackers or duds CNN reported before the release of the report, that the committee had a new, big bombshell. CNN reported that Hutchinson was told “what to say” during testimony. Big, if true.

According to CNN’s “bombshell” exclusive:

According to the report, “the lawyer had advised the witness that the witness could, in certain circumstances, tell the Committee that she did not recall facts when she actually did recall them.”

“When the witness raised concerns with her lawyer [ Passantino] about that approach,” according to the summary, the lawyer said, “They don’t know what you know, [witness]. They don’t know that you can recall some of these things. So you saying ‘I don’t recall’ is an entirely acceptable response to this.”

The problem with this bombshell is that it’s like the rest of the Hutchinson bombshells. Smoke, no fire. Nowhere in the just-released report is the lawyer, Stefan Passantino ever mentioned. Not once. She isn’t credible. She didn’t testify to what people said, she testified to “something to the effect of”. With that preface, Hutchinson can (and likely did) make up what was actually said (if at all). It sure seems like she didn’t remember what was said, she recalled the “favor” of the conversation. In short – she didn’t remember specifics. It is entirely possible, and I think likely, that her lawyer listened to her say “something to the effect of” about a dozen times and stopped her. Then said:

“Look, if you don’t remember what was actually said it’s perfectly acceptable to say you don’t recall.” I’ve instructed many witnesses to do just that.

The committee report mentions the “irate” president and Hutchinson being told about it in a moment of double hearsay. The committee wrote on page 127:

Hutchinson, testified that Ornato related an account of President Trump’s “irate” behavior when he was told in the Presidential SUV on January 6th that he would not be driven to the Capitol.

But that isn’t what she testified to. Hutchinson called the vehicle “The Beast” not the presidential SUV. Missing from that “evidence” is any mention of Trump flying over two Secret Service agents to grab the steering wheel. Why not include that? Because her testimony about flying Trump is absurd, and even the committee knows it.

My prediction is that Hutchinson will not testify in any trial, on any subject. Once she opens her mouth on the stand, she opens herself to cross-examination and that examiner would gut her like a fish.

Another CNN ‘bombshell’ that turned into a wet firecracker, just like the committee’s report. It’s a lot of smoke and a few mirrors.