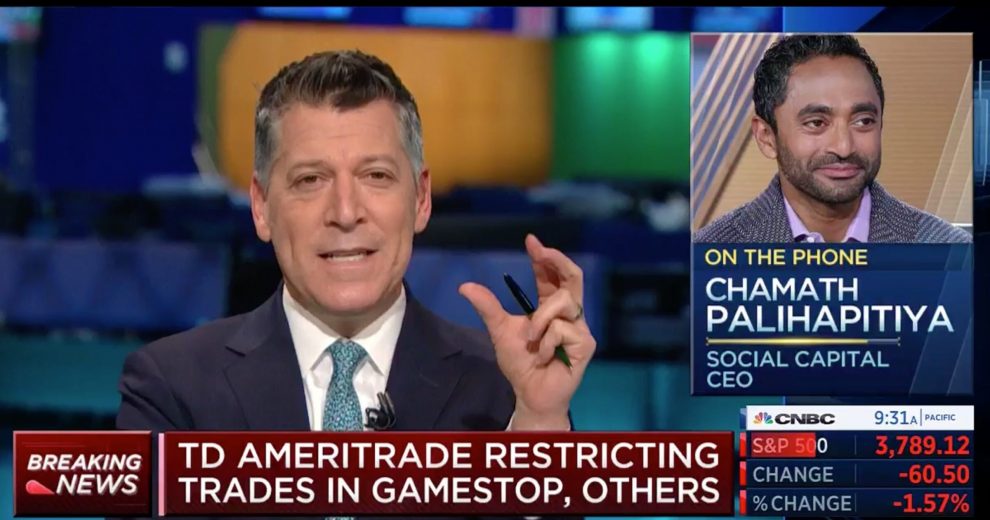 A CNBC guest called out an anchor — accusing him of siding with big ticket investors over average joes — in an epic, marathon clash on the financial network.

The throw down happened on CNBC’s Fast Money Halftime Report Wednesday as anchor Scott Wapner interviewed Chamath Palihapitiya — a prominent venture capitalist — about the frenzy on Wall Street this week triggered by the meteoric rise of several stocks including, most notably, video game retailer GameStop.

A fuller explainer can be found here, but to summarize: GameStop has set off a panic among many traditional Wall Street types, as a group of investors on Reddit have bought up the stock in an effort to squeeze out hedge funds which have sold it short. The mass buy has led to the stock going from 64 at last Friday’s close all the way up over 330 — leaving the hedge funds who sold short exposed to potential losses in the billions.

Is it a case of massive market manipulation requiring government intervention? Or are average investors coming together and simply beating Wall Street at its own game? Wapner and Palihapitiya debated the topic on Wednesday — with the guest suggesting that the CNBC anchor’s interests side, not with the smaller investor, but with the hedge fund behemoths. Wapner argued that the stock is primed to crash, and called for regulation to protect small investors from losing their shirts. But Palihapitiya wasn’t buying it.

“Don’t all of a sudden look at a short squeeze, where money is being made by retail, and say, ‘Hey. they could be and may be the bag holder in the future, so let’s make sure they can never participate in the future,’” Palihapitiya said. “That’s crazy.”

“I didn’t say that,” Wapner replied.

“You are saying that!” Palihapitiya said. “That’s the implication of what you’re saying.”

“I’m not saying they shouldn’t be able to participate,” Wapner countered.

“You’re saying they should participate on your terms—” Palihapitiya said.

Wapner denied the charge — saying that he was merely calling for a “hazard sign.” Palihapitiya argued that any regulation targeted at smaller investors must also apply to the big hedge funds — who in the case of GameStop, Palihapitiya asserted, would have been shut down by a watchdog for short selling 140 percent of the company.

“You can’t all of a sudden have your cake and eat it too,” Palihapitiya said. “‘Let’s have hedge funds operate in the shadows, but let’s then basically lambaste [reddit subgroup] wallstreetbets because they have the courage to write their stuff down publicly where anybody can see it.’ That doesn’t make sense.”

“I’m not lambasting anybody,” Wapner said. “I’m glad these people are making money. That’s the way it should be.”

“Let’s face it, no you’re not,” Palihapitiya said. He added, “And that’s the issue. Because the rules are changing underfoot, people don’t like them.”

The marathon clash lasted nearly 40 minutes. Watch a 6-minute highlight above, via CNBC.