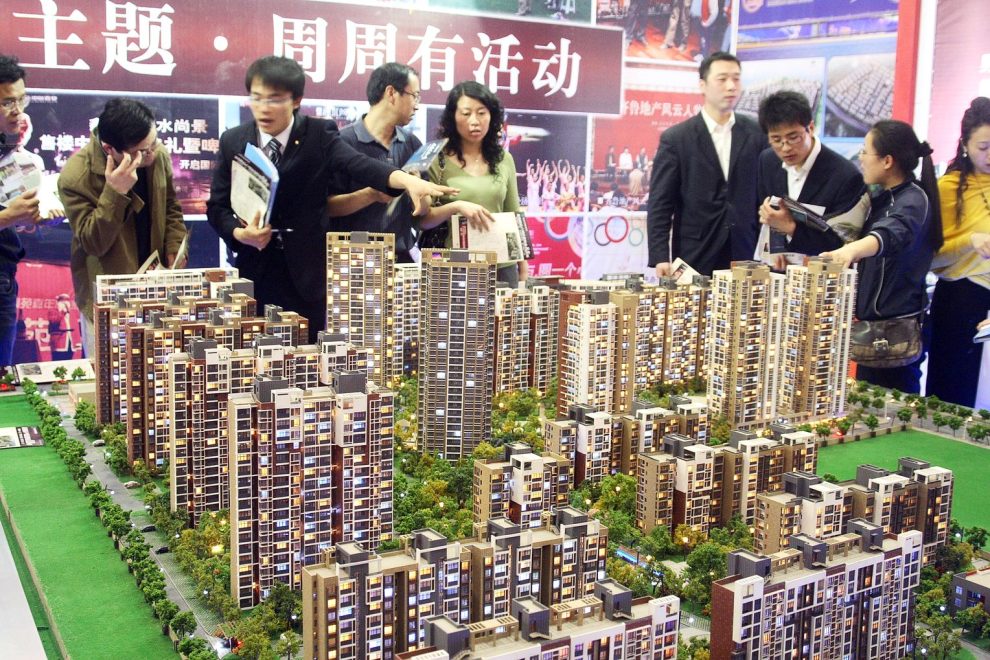 Chinese developers have lost at least $90 billion in the last year, according to reporting from Bloomberg, as home prices have gone down for the last 11 months. Dozens of developers have defaulted on their debts, and many of them have stopped work on unfinished housing, which has sparked mass outrage and even protests as more than 80% of Chinese homebuyers take out mortgages and begin paying them down before their prospective home is completed.

This arrangement, which was once a source of easily accessible capital in a red-hot housing market, has left countless Chinese consumers holding the bag on half-finished homes that may never be fully constructed. Thousands of homebuyers are refusing to pay mortgages on unfinished properties in a mortgage boycott that has spread to nearly 100 cities and has affected over 320 development projects.

“It’s gotten to the point where no one is taking care of it. So we naturally also have to defend our own rights,” one boycotter, who remained anonymous to avoid retribution, told The LA Times. “If we the people are not happy, it’s difficult to have a stable society.” She also told the outlet that some homebuyers who demanded answers have been threatened or detained for their trouble.

Over half of household wealth in China is reportedly tied up in housing, so the reversal of fortunes in real estate could have wide-reaching economic consequences.

“We are seeing it everywhere,” said Michael Pettis, finance professor at Peking University’s Guanghua School of Management. “You get these spreading waves, and the bigger the sector is, the more powerful those waves are. And in China, unfortunately, the property sector is huge.”

Beijing has reportedly signaled that whatever rescue efforts take place are to prioritize protecting homeowners over developers, although much of the response has been left to local governments.

“The aim of the rescue measures is to save the property market and household confidence, but not the developers,” said Gary Ng, senior economist at Natixis SA. “As it is unlikely to see significant policy changes, the golden age of fast revenue growth and high leverage for property developers is probably over.”

Local governments are likely to be somewhat handicapped in their response to the crisis, as their budgets were already strained during the COVID pandemic. Furthermore, 40% of their revenue has come from land sales, which have dried up in the cratering real estate market that is driving this crisis.

Other economic indicators seem quite grim. Chinese youth unemployment has reached nearly 20%, consumer confidence has hit record lows in recent months, and, in a sign that the Chinese government may believe the economy in more dire straits than they’re letting on, the People’s Bank of China (China’s central bank) has lowered interest rates while most of the world is raising them to combat inflation; inflation in China is not as severe as many other major economies, but it is still at a two-year high. Less than a week ago, Chinese state media indicated that the PBOC would prioritize combating inflation for the remainder of 2022.

Interference from Beijing has put further stress on the Chinese economy — crackdowns on private industry to combat “income inequality” and curb “unscrupulous business practices” have reportedly damaged the tech sector and private tutoring companies. China’s aggressive “zero-covid” lockdowns continue to disrupt day-to-day life for millions of its citizens and have created widespread despair and uncertainty. Efforts to increase economic investment via greater liquidity may fall flat when Chinese consumers are increasingly determined to save whatever money they can rather than spend it.

“In this economy, cash is king, having money on hand is most important,” a 32-year-old construction worker, identified only as Gu, told The LA Times.

“China is definitely in a very desperate situation,” said Xingdong Chen, an economist at BNP Paribas. “The problem now is no effective demand. If you don’t allow people to come out and consume … there is no demand.”

A key sign of flagging Chinese demand is the sharp decline in imports, with commodities like iron and copper ore dropping drastically. China is a leading consumer of commodities on the global market, and a drop in demand for industrial materials could have major ramifications in developing countries in Africa and Latin America.

The world economy is already in a fairly precarious state: supply chains for vital resources such as gas, oil, and grain have been disrupted by the ongoing Russian invasion of Ukraine, food shortages and famine are expected in much of the developing world, and by all reasonable definitions, the U.S. is in a recession. The potential fallout from an economic catastrophe in China is difficult to gauge.

The ongoing conflict over the independence of Taiwan, for example, could be affected in myriad ways. On one hand, Xi Jinping, who is widely expected to seek an unprecedented third term as president to become the longest-serving ruler of China since Mao, may ratchet up tensions or even invade Taiwan to gin up nationalist support and distract from domestic woes. Alternatively, a flailing economy might convince him that China is not in a strong enough position to take the island or risk further disrupting its economy by destabilizing a major trading partner.