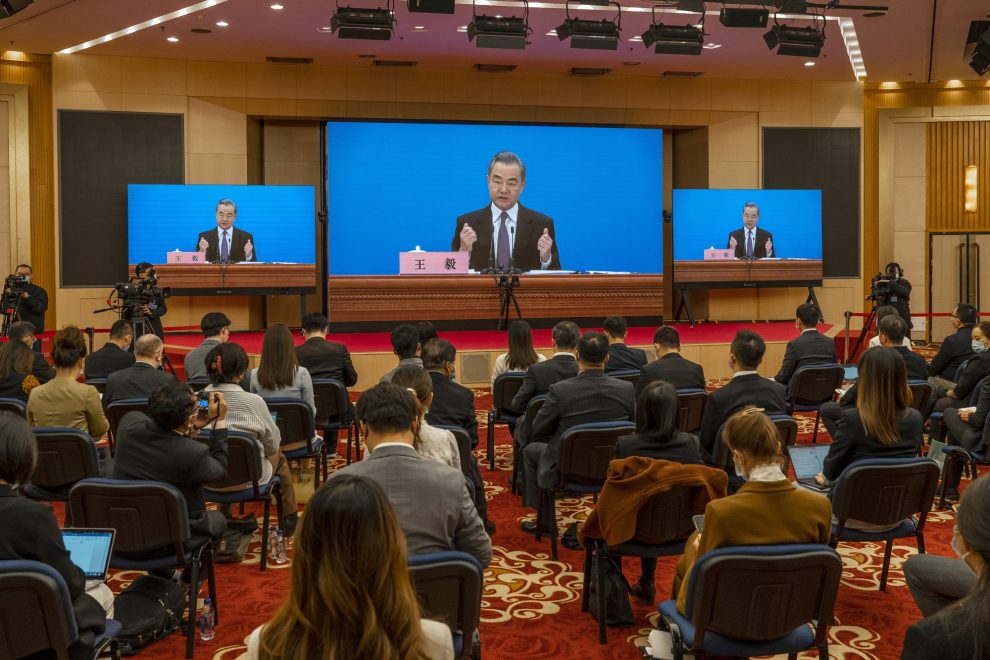 China warned the U.S. against trying to build what it called a Pacific version of NATO, while declaring that security disputes over Taiwan and Ukraine were “not comparable at all.”

Foreign Minister Wang Yi told his annual news briefing Monday that the “real goal” of the U.S.’s Indo-Pacific strategy was to form Asia’s answer to the North Atlantic Treaty Organization. China has often accused the U.S. of trying to form blocs to suppress its growth, a complaint that’s likely to attract greater attention after President Vladimir Putin cited similar grievances before his invasion of Ukraine.

“The perverse actions run counter to the common aspiration of the region for peace, development, cooperation and win-win outcomes,” Wang added. “They are doomed to fail.”

Complaints about U.S. efforts to strengthen its alliance network in Asia were among several points of contention raised by Wang in the almost two-hour briefing on the sidelines of the National People’s Congress in Beijing. The senior diplomat repeatedly alluded to the U.S. as the source of problems with countries around the globe and issued some of China’s most pointed warnings yet against calls to expand U.S. ties with Taiwan.

“This would not only push Taiwan into a precarious situation, but will also bring unbearable consequences for the U.S. side,” Wang said on the sidelines of the National People’s Congress in Beijing, later adding: “Taiwan will eventually return to the embrace of the motherland.”

Several Asian nations — like their counterparts on Russia’s European frontier — have sought closer security ties with the U.S. to keep from being dominated by the region’s biggest player. China has active border disputes with neighbors including Japan, India and Vietnam and has stepped up military, diplomatic and economic pressure on Taiwan, sending warplanes on some 960 forays through the island’s air defense identification zone last year.

The Biden administration outlined efforts to push back against growing Chinese clout in its Indo-Pacific strategy released last month. The U.S. has sought to build a coalition of democracies around the world, including both traditional treaty partners such as Japan and new grouping such as the Quad, including also Australia and India.

Russia’s attack on Ukraine has undermined confidence that world powers would be able to prevent a crisis from similarly erupting over Taiwan, a democratically governed island of more than 23 million people and key global source of semiconductors. Wang dismissed the comparisons, arguing that Taiwan is part of Chinese territory — a claim President Tsai Ing-wen in Taipei has rejected.

“Some, while being vocal about the principle of sovereignty on the Ukrainian issue, have kept undermining China’s sovereignty and territorial integrity on the Taiwan question — this is a blatant double standard,” Wang said.

Russia launched its action in Ukraine weeks after President Xi Jinping hosted Putin in Beijing and publicly declared their friendship had “no limits.” China has sought to avoid taking a position in the conflict, as it attempts to balance support for Russian efforts to challenge U.S. dominance with its interest of being regarded as a responsible major power.

‘Rock Solid’
Wang passed up another opportunity to criticize Russia’s military action or call it an “invasion,” instead saying that ties between the two countries remained “rock solid.” Russia is growing more reliant on Chinese support as it faces a barrage of U.S.-led sanctions over bloodshed in Ukraine.

“No matter how precarious and challenging the international situation may be, China and Russia will maintain a strategic focus and steadily advance our comprehensive strategic partnership and coordination,” he said.

Wang said that China would soon offer humanitarian assistance to Ukraine. The briefing comes as Russian forces continue their bombardment of Ukrainian cities, raising fears of mass casualties and a broader humanitarian crisis.

“China is prepared to continue playing a constructive role to facilitate dialogue for peace and work alongside the international community when needed to carry out necessary mediation,” Wang said, stopping short of clarifying whether Beijing would mediate between Kyiv and Moscow.