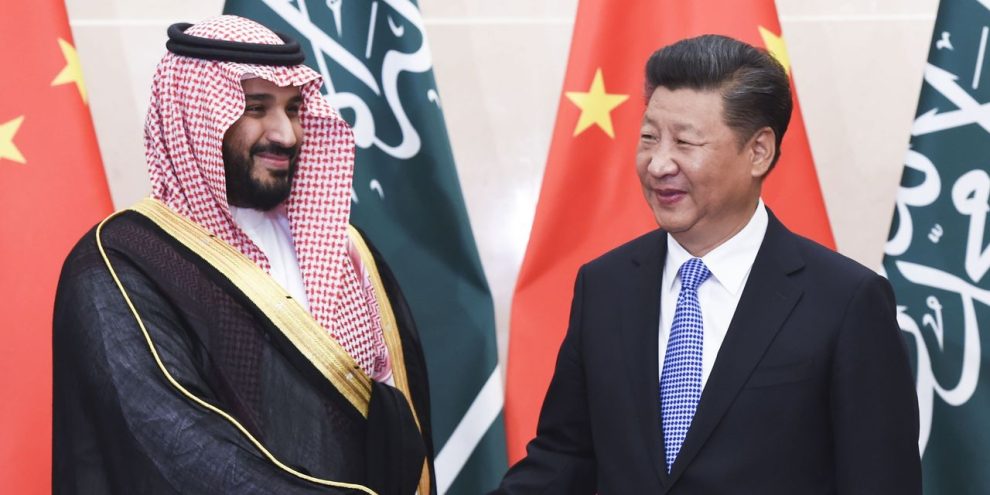 Plans for a joint Saudi Arabia-China refining and petrochemical complex to be built in northeast China that were shelved in 2020 are now being discussed again, according to sources close to the deal. The original deal for Saudi Aramco and China’s North Industries Group (Norinco) and Panjin Sincen Group to build the US$10 billion 300,000 barrels per day (bpd) integrated refining and petrochemical facility in Panjin city was signed in February 2019. However, in the aftermath of the enduring low prices and economic damage that hit Saudi Arabia as a result of the Second Oil Price War it instigated in the first half of 2020 against the U.S. shale oil threat, Aramco pulled out of the deal in August of that year.

The fact that this landmark refinery joint venture is back under serious consideration underlines the extremely significant shift in Saudi Arabia’s geopolitical alliances in the past few years – principally away from the U.S. and its allies and towards China and its allies. Up until the 2014-2016 Oil Price War, intended by Saudi Arabia to destroy the then-nascent U.S. shale oil sector, the foundation of U.S.-Saudi relations had been the deal struck on 14 February 1945 between the then-U.S. President Franklin D. Roosevelt and the Saudi King Abdulaziz. In essence, but analyzed in-depth in my new book on the global oil markets, this was that the U.S. would receive all of the oil supplies it needed for as long as Saudi had oil in place, in return for which the U.S. would guarantee the security both of the ruling House of Saud and, by extension, of Saudi Arabia.

After the end of the 2014-2016 Oil Price War, Saudi Arabia had not only lost the upper hand in global oil markets that it had established alongside other OPEC member states with the 1973 Oil Embargo but it had also prompted a catastrophic breach of trust with its former allies in Washington. Consequently, the U.S. changed the effective terms of 1945 to: the U.S. will safeguard the security both of Saudi Arabia and of the ruling House of Saud for as long as Saudi not only guarantees that the U.S. will receive all of the oil supplies it needs for as long as Saudi has oil in place but also that Saudi Arabia does not attempt to interfere with the growth and prosperity of the U.S. shale oil sector. Shortly after that (in May 2017), the U.S. assured the Saudis that it would protect them against any Iranian attacks, provided that Riyadh also bought US$110 billion of defense equipment from the U.S. immediately and another US$350 billion worth over the next 10 years. However, the Saudis then found out that none of these weapons were able to prevent Iran from launching successful attacks against its key oil facilities in September 2019, or several subsequent attacks.

Concomitant with this weakening of relations between Saudi Arabia and the U.S. came a drift towards Russia first and then China. Given the reputational damage done to the perceived power of Saudi Arabia and its OPEC brothers by their inability to destroy or disable the growing threat from U.S. shale oil to their former dominance in the global oil markets, their attempts to pull oil prices back up to levels at which they could begin to repair the damage done to their economies by the 2014-2016 Oil Price War towards the end of 2016 also failed. At that point, fully cognisant of the enormous economic and geopolitical possibilities that were available to it by becoming a core participant in the crude oil supply/demand/pricing matrix, Russia agreed to support the OPEC production cut deal in what was to be called from then-on ‘OPEC+’, albeit in its own uniquely self-serving and ruthless fashion, again analyzed in-depth in my new book on the global oil markets.

Given Russia’s significant leverage in the Middle East by dint of its pivotal position in making the OPEC deal credible in terms of being able to affect global oil prices, China also began to more aggressively leverage its own power with the group and in the region by dint of its being the world’s biggest net importer of crude oil and its increasing use of checkbook diplomacy. Nowhere were the two elements more in evidence than in China’s offer to buy the entire 5 percent stake of Aramco in a private placement. This was designed to enable Saudi Crown Prince Mohammed bin Salman to save face, given his unsuccessful attempts from 2016 to 2020 to persuade serious Western investors to have any significant part in the company’s initial public offering. Shortly after the offer was made, China was referred to by Saudi’s then-vice minister of economy and planning, Mohammed al-Tuwaijri, as: “By far one of the top markets” to diversify the funding basis of Saudi Arabia. He added that: “We will also access other technical markets in terms of unique funding opportunities, private placements, panda bonds and others.” In a similar vein, and just last year, Saudi Aramco’s chief executive officer, Amin Nasser, said: “Ensuring the continuing security of China’s energy needs remains our [Saudi Aramco’s] highest priority — not just for the next five years but for the next 50 and beyond.”

Between the end of the 2014-2016 Oil Price War and now, there have been multiple high-level visits back and forth between Saudi Arabia and China, beginning most notably with the trip of high-ranking politicians and financiers from China in August 2017 to Saudi Arabia, which featured a meeting between King Salman and Chinese Vice Premier, Zhang Gaoli, in Jeddah. During the visit, Saudi Arabia first mentioned seriously that it was willing to consider funding itself partly in Chinese yuan, raising the possibility of closer financial ties between the two countries. At these meetings, according to comments at the time from then-Saudi Energy Minister, Khalid al-Falih, it was also decided that Saudi Arabia and China would establish a US$20 billion investment fund on a 50:50 basis that would invest in sectors such as infrastructure, energy, mining, and materials, among other areas. The Jeddah meetings in August 2017 followed a landmark visit to China by Saudi Arabia’s King Salman in March of that year during which around US$65 billion of business deals were signed in sectors including oil refining, petrochemicals, light manufacturing, and electronics.

Later, the first discussions about the joint Saudi-China refining and petrochemical complex in China’s northeast began, with a bonus for Saudi Arabia being that Aramco was intended to supply up to 70 percent of the crude feedstock for the complex that was to have commenced operation in 2024. This, in turn, was part of a multiple-deal series that also included three preliminary agreements to invest in Zhejiang province in eastern China. The first agreement was signed to acquire a 9 percent stake in the greenfield Zhejiang Petrochemical project, the second was a crude oil supply deal signed with Rongsheng Petrochemical, Juhua Group, and Tongkun Group, and the third was with Zhejiang Energy to build a large-scale retail fuel network over five years in Zhejiang province.

This latest Aramco-Norinco-Panjin Sincen deal, though, carries with it even broader ramifications of a much more overtly testing nature for U.S. President Joe Biden in terms of where he draws the line on supposed allies blurring trade considerations and security considerations. All Chinese companies function as part of the State apparatus – without any exception – and Norinco has the added troubling element for the U.S. that it is one of China’s major defense contractors, specializing in the full range of research, development, and production of military equipment, technology, systems, and weapons. This runs alongside ongoing concerns from Washington about Saudi Arabia’s on again-off again agreement with Russia to buy its S-400 missile defense system, and much more recent news in December 2021 that Saudi Arabia is now actively manufacturing its own ballistic missiles with the help of China.