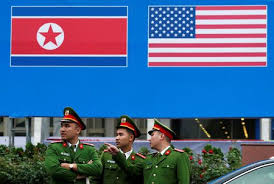 After weeks of silence about the summit in Vietnam, North Korea’s state news agency KCNA on Sunday announced Kim’s departure by train, en route to talks in which the two leaders aim to build on a commitment to rid the Korean peninsula of nuclear weapons, reached at their first meeting in Singapore in June.

KCNA later issued a commentary arguing that if Trump listened to skeptics at home, he could face a “shattered dream” and “miss the rare historic opportunity” to improve relations with North Korea.

“The Democratic Party of the U.S. and other opponents to the negotiations move overtly and covertly to disrupt them as supported by scepticism backed by all sorts of groundless stories and misinformation even at such a crucial moment as now,” said the commentary, which was released under the name Jong Hyon.

Trump’s opponents would bear the responsibility if the summit failed to achieve results, which would leave the U.S. people exposed to “security threats”, it said.

See also  NY Gov. Hochul: We Need National Laws to Deal with Guns, Social Media
→ What are your thoughts? ←
Scroll down to leave a comment: