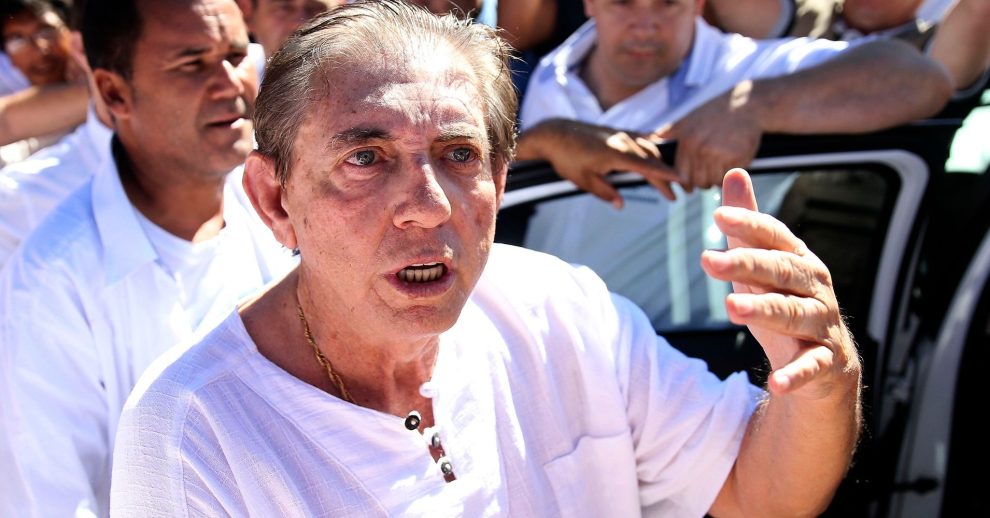 He calls himself “John of God” and dwells in the Brazilian village of Abadiania, an otherwise unremarkable countryside transformed into a fanciful spiritual tourist mecca for his believers, where everybody wears white and waits in line for a moment with the celebrity healer they’ve all come to see.

Zahira Lieneke Mous was among them. The Dutch dance choreographer made the pilgrimage four years ago, seeking to heal sexual trauma she said she had suffered in the past. She had read books about “John of God” and watched YouTube videos about his alleged powers and saw his 2010 interview with Oprah Winfrey, an episode that brought the faith healer newfound international fame. The series, since wiped from Oprah’s website, was titled, “Do You Believe In Miracles?” Mous believed she did.

She went by herself to see “John of God,” whose real name is João Teixeira de Faria and who claims to have treated millions of followers since the 1970s. She recounted in an interview with Brazil’s Globo TV last week how she waited in line twice to experience his healing. On the first visit, he scribbled a prescription for an herb she was told would help her. The second time, he offered a private consultation – a “spiritual cleansing.” Mous agreed. “You’re made to feel special somehow,” she told Globo TV.

She waited until everyone else had their turns in line, until finally she was alone, and “John of God” invited her into his office. And then into his bathroom.

That’s where Mous said “John of God” raped her – all while leading her to believe it was part of her healing.

She is among hundreds of women who have recently come forward with sexual abuse allegations that have razed Faria’s image as saintly miracle-worker and replaced it with one of a suspected fraudster who exploited his celebrity to take advantage of female believers. On Sunday, Faria turned himself in to Brazil’s Civil Police on suspicion of sexual abuse, the State Delegation of Criminal Investigation in Goiânia, Brazil, confirmed to The Washington Post.

More than 300 women from around the world have contacted prosecutors to accuse him of abuse, largely after Globo TV aired the stories of numerous women in Brazil’s first major #MeToo scandal, the newspaper Folha de S.Paulo reported. But prosecutors told Estadão newspaper that investigators have so far focused their attention on 15 cases. Faria has denied all of the allegations.

“I really hope to help other women to come out of their shadow, because we don’t have to feel ashamed,” Mous told Globo TV Dec. 6. “He has to feel ashamed, and all the people that protect him to continue doing what he’s doing.”

Faria’s phenomenon dates back to the 1970s. Since then, he’s claimed to have treated millions of people and is either seen as the best healer since Jesus Christ or a total hoax, depending on who you ask. Faria, a second-grade dropout and son of a tailor, claims that he’s performed life-altering surgeries on his followers while the spirits of doctors or biblical figures are channeled through him, such as King Solomon, the biblical king of Israel. He routinely stresses that God, not he, is the one performing the operations.

These surgeries include forcefully shoving a pair of forceps up people’s noses to the point that it is nearly poking their brains, as his followers have described it, or slicing people open without anesthesia. Alternatively, he is perhaps best known for performing “psychic surgeries,” supernatural invisible procedures involving no scalpels or forceps whatsoever, only using the power of what he calls the “Entity.” By channeling these spirits, he has claimed to treat the blind, the paraplegic, those ill with cancer and leprosy and any number of diseases. He has no medical license and has previously been jailed for practicing medicine anyway.

The sexual abuse allegations have been percolating for years, but until now have done little to deter the thousands of visitors in white in the small town of Abadiania. Journalists have attempted to address the allegations several times for more than a decade.

In a 2005 ABC News “Primetime Live” segment titled, “Is ‘John of God’ a Healer or a Charlatan?” he was asked about accusations that he had taken advantage of an unnamed woman who came to be healed. “There is a lot of jealousy. People talk,” Faria said. “What dictates is the conscience toward God.”

In 2014, a reporter from the Sydney Morning Herald traveled to the Casa de Dom Inácio, the name of his spiritual compound, to interview him, squeezing in just a few questions before Faria got angry and stormed off while shouting. One question was about sexual abuse allegations. “I thought you came to talk about me,” Faria said. “Not other people.”

His most famous media segment was with Oprah. In addition to her 2010 “Do You Believe in Miracles?” segment, featuring interviews with both skeptics and believers, Oprah traveled to Abadiania in 2012 to witness the works and controversial methods of John of God herself in an interview that again boosted his profile. In a statement to Reuters Sunday, she acknowledged the segment and said, “I empathize with the women now coming forward and hope justice is served.”

A spokesperson for Faria maintained his innocence in light of the accusations in a statement to O Globo newspaper last week, saying the faith healer “vehemently rejects any improper practice in his care” and calling the accusations “false and fanciful.” Likewise, an attorney for Faria told Globo G1 Sunday, “We continue to vehemently contest all the charges,” citing a “total lack of evidence.”

The women who have come forward publicly to accuse Faria, many anonymously, have told similar stories of alleged abuse. First, he told them they were special, they say. Then, he pulled them into a bathroom, where Faria allegedly would grope them, place their hands on his penis, or, as Mous claimed, penetrate them.

Mous has claimed the abuse happened on two separate occasions during her 2014 trip. On the first, she said when she entered his private office, he asked her, “So what are you here for again?”

“And to myself I was thinking, ‘Didn’t the Entity already know?’” Mous told Globo TV. “Didn’t you scan my energy so you know exactly why I’m here? I said, ‘I’m here to heal my sexual trauma.’”

He then told her to stand in front of him, with his back to her, Mous said. He hovered around her like he was smelling her, she said, and then moments later he ushered her into the bathroom. He instructed her to sit in front of the mirror, “and he stood behind me,” Mous said, “and then he asked me, ‘What do you see?’”

She wasn’t sure what he wanted her to say. A woman? Her reflection? But as she searched for meaning, he grabbed her hand. She said he placed it on his penis. She froze. But he kept talking, about her family, her life, as though all of it were just part of the process, Mous said. “So you’re being like manipulating into believing, he’s scanning me, or he’s doing something. And then he says, ‘You should smile,’” Mous recalled. “‘You should feel joy.’”