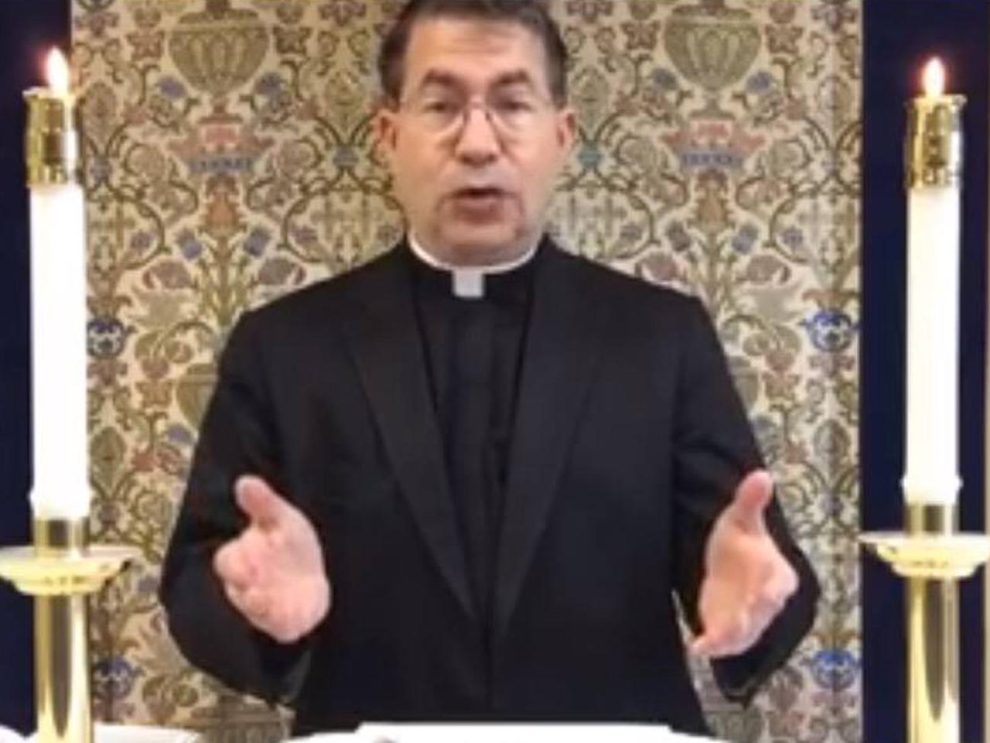 Outspoken Catholic priest and political activist Frank Pavone, the national director of the influential pro-life ministry Priests for Life who has been laicized, or dismissed, from the clerical state by the Catholic Church, told Fox News Digital this week that he is involved in a battle “for the soul of the Catholic Church.”

He suggested, too, that the abortion issue is at the center of it.

Pavone, whose organization is headquartered in Titusville, Florida. also said that some bishops in the Church do not want to “offend” powerful Democrats and members of Congress — which is why they purposefully soften their pro-life message.

On Dec. 13, the Catholic bishops of the United States were informed that Pavone was laicized on Nov. 9 for his “blasphemous communications on social media, and for persistent disobedience of lawful instructions from his diocesan bishop,” according to a Vatican statement.

Since 2016, “Pavone has posted tweets, Facebook statuses, videos and other social media postings urging support for the Republican Party, calling into question the validity of the 2020 presidential election and disparaging Democratic lawmakers,” Catholic website Pillarcatholic.com reported.

Pavone served as a member of the campaign advisory group Catholics for Trump during the 2020 election, the same site noted.

Pavone explains issue from his viewpoint
Specifically, “they [meaning some in the Church hierarchy] got upset by a comment I made to someone who was arguing with me on Twitter, a Biden supporter,” Pavone told Fox News Digital.

“It was in the midst of the nationwide frustration and anger of the 2020 election,” he continued.

“I used the word ‘g**damn’ in a tweet, which I shouldn’t have done, and normally never do.”

Ordained in New York in 1988, Pavone said he also called Biden a “loser” in the tweet.

“I did the wrong thing,” he said of his tweet.

“I went to confession. I shouldn’t have done that, but that’s the world we live in. We get angry.”

Pavone said the Church’s position became, “Fr. Frank has taught a heresy. God does not damn people and he has put Biden and the Democrats in the category that they are to be damned and go to hell. This is not right for a priest to be teaching this.”

While there is support, many bishops are ‘obstacles’
Noting that his ministry has “tremendous support” in some segments of the Church itself, he said, “We have high-placed cardinals and others at the Vatican who strongly support our work. We’re side by side with the Holy See in doing this pro-life work.”

Pavone said that his organization “works right at the heart of the Church.”

Pavone also said, “In the midst of this support, you’ve got a certain segment of bishops who have really been doing everything they can to put obstacles in the way of this work and of my doing this work.”

“The last 20 years,” he said, have presented “one battle after another” set up by bishops.

He said there’s been friction between himself and Bishop Patrick Zurek of the Diocese of Amarillo, Texas, where he was last incardinated.

Fox News reached out for comment to Bishop Zurek, as well as to the United States Council of Catholic Bishops (USCCB) and the Vatican. As of publication time, no response has been received.

Pavone feels there are several reasons for the pushback he’s gotten from some segments within the Catholic Church.

First, “they see the influence our ministry has, and they feel they can’t control it,” said Pavone.

Secondly, he feels some within the hierarchy are “envious” of his group’s fundraising — and also “envious of our influence with the Catholic people.”

Politics enters the debate
Pavone said that for years, politics has been at the heart of the friction between himself and some of the bishops of the Church — both national politics and politics within the Church itself.

“Election time rolls around, and they all have their seminars in their dioceses, and they say to the people, ‘OK, here are the Catholic principles of voting. And, we have to look at all the issues. We can’t judge people just on one issue'” — meaning abortion.

Adding Clarity for everyone to see. 21 years of persecution from some Catholic Bishops and fantastic support from many other Bishops and Cardinals. pic.twitter.com/bRTm4KfKYO

Invariably, Pavone also said, someone holds up a Priests for Life brochure and says, “Oh, but Fr. Pavone says that abortion is the primary issue, and we have to elect a pro-life candidate.”

“They don’t like that,” he said, referring to certain segments of the hierarchy of the Catholic Church.

He added, “I think the battle is this: Who has the heart and soul of the Catholic pro-life movement?”

Pavone said he and his 15-member team “have become very influential — probably the most influential Catholic pro-life voice, and that’s [what] they want to regain control of.”

Parties within the Church, said Pavone, have tried to discredit or dissuade him by aiming to get him to return to parish work, in part, and by investigating the finances of Priests for Life.

He says his group’s finances have been looked into by the Vatican — with his organization “coming out clean.”

“I’m not rebellious. I have a vocation,” Pavone said.

He added, “I’m convinced that I’m called to do this work. And why shouldn’t a priest be able to protect the unborn?”

‘We were vindicated’
Pavone said that some in the Church have been “very, very troubled” by his vocal support of President Donald Trump.

He continued, “Of course, we were vindicated by the reversal of Roe v. Wade, because without President Trump, that wouldn’t have happened.”

Pavone says some in the Catholic Church want to deliver a pro-life message “in a way that doesn’t offend Democrats.”

Priests For Life is a reform movement within the #Catholic Church. And any reform movement is going to get pushback from the institution that it is trying to reform.
The teaching of the Church is stable and clear. The issue is how much priority do we give it?

He added, “And I say Democrats, but I don’t mean the grassroots people, because there are tens of millions of pro-life Democrats.”

Bishops ‘don’t want pushback’
He continued, “I’m talking about their friends in high places, whether it’s members of Congress or leaders of the Democrat Party. They’re Democrat loyalists, a lot of them.”

He added, “The bishops are in tight with a lot of those people, and they don’t want pushback from them.”

He also said, “I actually had a bishop say to me one time when we looked over our [Priest for Life] voter guide, which I regard to be strictly neutral, ‘Well, your voter guide is not critical enough of the Republicans.’”

Pavone continued, “Very respectfully, I ask, ‘What part of what I’m doing do you not like doing? Are we saving too many lives or are we having too many prayer campaigns? Are we healing too many women from abortion? Am I leading too many people from the abortion industry into the Catholic Church ministry?'”

Pavone said a hard-line stance from the Catholic Church in terms of protecting the unborn is “crucial.”

“It’s part of the DNA of the Church herself and has been from the very beginning,” he said. “Why? Because the Church is all about the gospel and kingdom of Jesus Christ.”

Pavone said that wavering on the big issues of the day, such as taking communion while being pro-abortion, cloud the Church’s authority.

“They’re sacrificing relationships. They may be sacrificing jobs, opportunities and money. People do all sorts of sacrificial things to stay faithful to the demands of their faith.”

Pavone feels that the Church cannot legislate his personality or his forthright way of expressing himself.

He added, “This is reflected, of course, in our American constitutional way of life. Without taking away anything from the role of or proper obedience within the Church and authority, it is still not their prerogative to do that, to try to shape people into their own image and likeness.”

Pavone said that if the Catholic Church shuts the door on him — and he has not had any official communication informing him of his laicization, he said — then he will be on the other side, waiting.

He added, “This has been my appeal all along and this is my appeal today to this whole latest action. Can we please listen to each other and try to understand one another?”