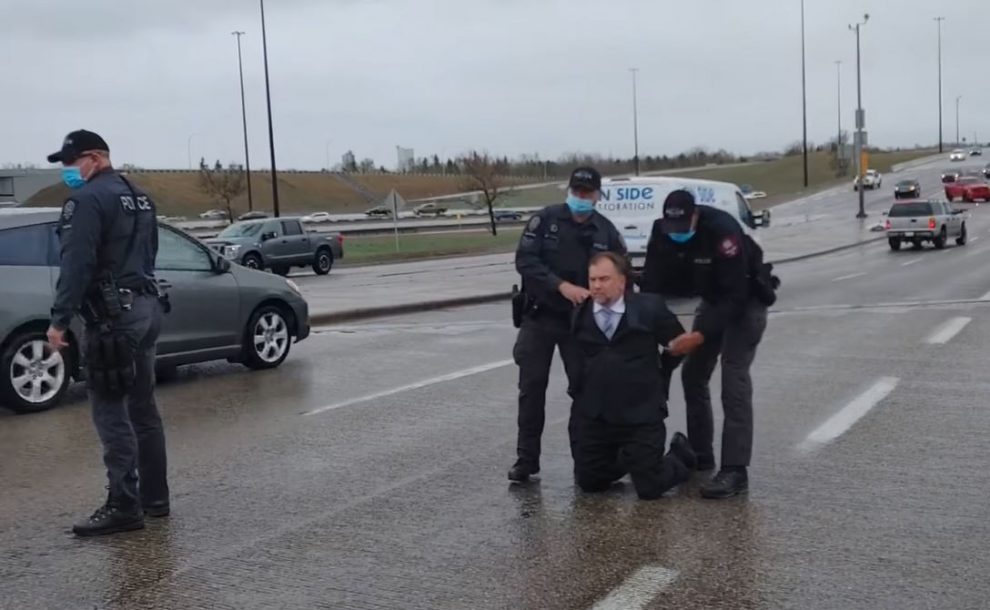 The Canadian Gestapo were smart this time. Instead of breaking into and swarming Canadian Pastor Artur Pawlowski’s church — as they previously did during an Easter weekend service, only to be appropriately shamed and heckled out of the place — this time the Canadian Gestapo waited until after Saturday services to arrest Pawlowski, and did so on a public highway.

Naturally, the Gestapo treated him like he was Scarface. Multiple officers and at least four police cruisers were involved:

Pawlowski was arrested for violating Canada’s fascist and anti-science laws against gatherings during the coronavirus outbreak. These restrictions are in place in Canada (and in many places here in the U.S.) despite the fact fully-opened states like Texas and Florida allow people to go back to normal and have done so while keeping their China Virus cases in line with lockdown states.

The arrest of Pawlowski and his brother occurred just days after Canada’s Health Gestapo “obtained a Court of Queen’s Bench Order that applies to gatherings, including protests, demonstrations and rallies,” Fox News reported.

Yeah, let’s see what happens when the domestic terrorists in the Canadian branch of Black Lives Matter decide to get together again.

Canada has become so openly fascist, Pawlowski is the second pastor arrested by the Canadian Gestapo. Back in February, the Canadian Gestapo arrested Rev. James Coates of GraceLife Church of Edmonton after he turned himself in. His crime was the same — holding church services in a fascist country.

There are reports the Canadian Broadcasting Corporation (CBC), a far-left fake news outlet, was tipped off to the arrest, which is why CBC photographer Rod Maldaner just happened to be on the scene when the arrest occurred. In a now-deleted tweet the Nazi-With-A-Camera celebrated the arrest and, naturally, passed along fake news:

This is the image of the day. Pastor Artur Pawlowski being arrested today in Calgary. Being a jerk has its consequences. He doesn’t seem to be laughing now. I bet he’s yelling #GETMEOUT. Next up, KJJ when he goes to the remand to protest.

Yeah, good work, journalist, except that wasn’t a photo of Arthur Pawlowski, that was a photo of his brother.

In the wake of what we are seeing in Florida and Texas, these continued lockdowns are nothing less than obscene and deliberate attacks on personal and religious freedom.

I personally will not attend in-person church services until I’m fully vaccinated and wait two weeks. But people have a human right to make their own decisions about the personal risks they’re willing to take.

Even though I choose to wear a mask (indoors) and social distance, others who choose not to, who choose to do things like attend church, don’t bother or worry me. As long as I’m wearing a mask and staying away from everyone, I feel safe. Honestly, how can someone infect me if I’m six feet away wearing a mask? It makes no sense.

What’s most galling is that if you’re rioting and terrorizing and looting and burning, the fascist government-media-academic-tech-entertainment establishment will cheer you on, but if you dare attend a Christian church…