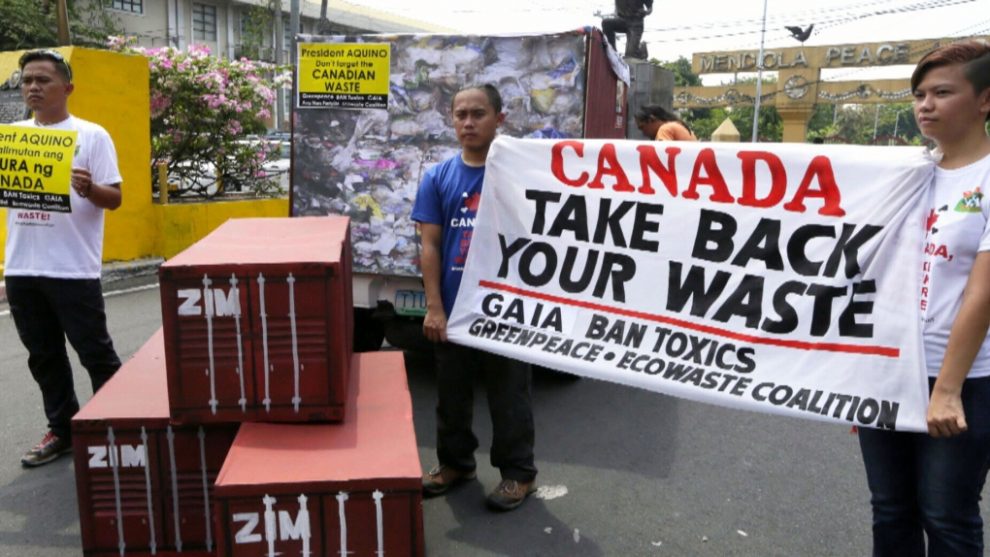 The government of Canada offered the Philippines a deal on Thursday to accept over 100 containers full of household trash after illegally sending them to the Asian country in 2013. President Rodrigo Duterte threatened to go to war with Canada last week if they did not accept the garbage.

“We’ve had a team that’s been working extremely hard, including from Environment and Climate Change Canada, to find a solution. I am not going to go into the details but there is a proposal on the table with the Philippines and we are hopeful we can come to a resolution,” Canadian Minister of Environment Catherine McKenna told reporters Thursday. McKenna said that the garbage would return to Vancouver but did not specify what the Canadian government would do with it once it returned.

Ottawa had little choice in accepting the garbage once again, as Duterte ordered his government to ship the trash back to Canada by May 15 regardless of what the Canadian government did. Canadian authorities said they had not yet heard from Manila whether their offer was satisfactory.

The Philippines received 103 containers of what they believed was recyclable waste in 2013 and 2014 from Canada. To the shock of Philippine authorities, upon opening the containers, they found that they were filled with household trash, impossible to recycle and significantly harmful to the environment if released. The Philippines buried 26 of the containers in a landfill but has yet to deal with the rest.

Shipping garbage to a country without open consent in this manner is a violation of international law under the Basel Convention, to which Canada is a signatory. Prime Minister Justin Trudeau passed a law in 2016 to prevent the situation from happening again, but never took action to rectify the shipment to the Philippines.

The trash has languished in the Asian country ever since, resurfacing as a major issue last week when Duterte threatened Canada with military action if it did not accept the garbage.

“I want a boat prepared. I’ll give a warning to Canada maybe next week that they better pull that thing out or I will set sail, there in Canada, I will dump their trash there,” Duterte said in late April. “I will declare war against them. I will advise Canada that your garbage is on the way. Prepare a grand reception. Eat it if you want to.”

“They have been sending their trash to us. Well, not this time. We will quarrel with each other. So what if we quarrel with Canada? We’ll declare war against them, we can beat them,” Duterte insisted. “I cannot understand why they are making us a dump site.”

Following the rant, Duterte’s presidential office attempted to walk back his assertions.

“That was an expression of outrage couched in a very strong term,” spokesman Salvador Panelo told reporters. “I don’t think any country would want to trigger another world war where all of us will get annihilated.”

Panelo did warn Canada that “the seventy years of diplomatic relations between the two countries will be put to naught if Canada will not act with dispatch and finality the resolution of this undiplomatic episode to which we take outrage.”

The Philippines initially gave Canada a week to take back the shipment. Panelo noted that Duterte’s other threat, to dump the trash all over Canada’s beaches, was hyperbole but not false – Manila would ship the garbage back in a week if Canada did not voluntarily take it. He later extended that deadline to May 15.

Leftist Prime Minister Trudeau made protecting the environment a key promise of his campaign when he was elected in 2015. Among his most controversial policy proposals is a push for a carbon tax that would significantly hurt the Canadian energy industry and challenged as unconstitutional (Canadian courts approved of the law this week). A refusal to accept the toxic shipment Canada sent to the Philippines would belie a lack of commitment on his part to protecting the earth.

Trudeau and Duterte have clashed in the past. When they first met, in 2017, Trudeau reportedly lectured Duterte on how to protect human rights in his country. Trudeau then told reporters Duterte was “receptive” to his criticism of the latter’s campaign against illegal drug trafficking, but Duterte told reporters Trudeau’s comments were “bullshit” and “a personal and official insult.”