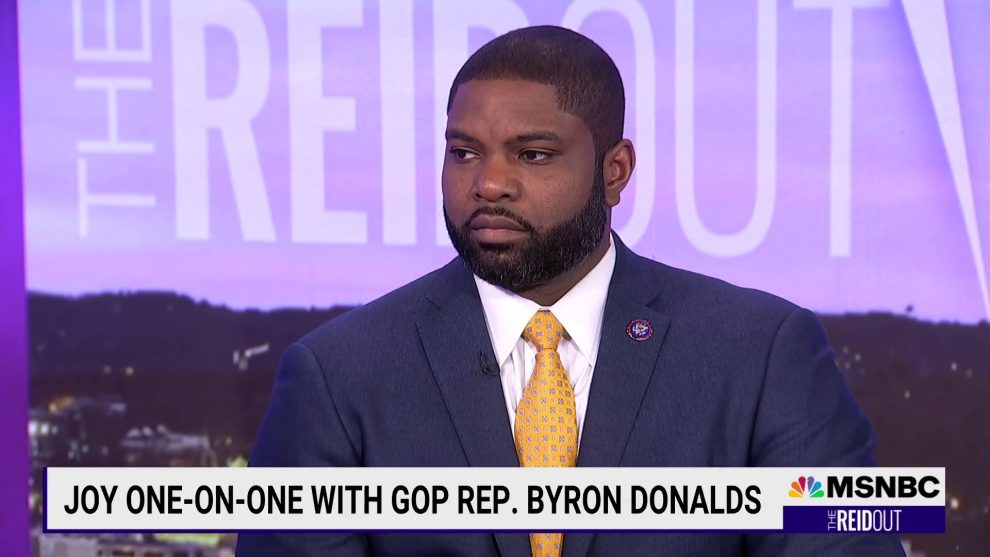 Byron Donalds, one of the up-and-coming stars of the House GOP caucus and apparently a fan of torture, decided to appear on Joy Reid’s show on Tuesday evening.

I’m only half-joking as I think Donalds acquitted himself well. He was knowledgeable and ready to handle everything thrown at him. Then there was Reid, who displayed her usual brand of abject stupidity and mind-numbing shallowness.

Let’s just jump right in, and a big credit to my friend Curtis Houck who put these clips together.

Byron Donalds to Joy Reid on her fixation with who's kicked off committees: This "has nothing to do w/the work of the 118th Congress…The other stuff is kind of a sideshow."

Joy Reid: "Not a side show b/c, unfortunately, it's kind of the show." pic.twitter.com/o1o2ZbMfHW

Let me translate Reid’s ranting there. What she really means to say is that she does not want to abide by the rules she and her party established during the last Congress. Nancy Pelosi ruled with an iron fist, breaching norms and dictating to Republicans who could be on what committee. Now, that shift, which Republicans warned about, is coming back to bite Democrats. Reid doesn’t like having to play by the standards she supported when it was politically convenient.

Of course, there’s a more serious reason aside from payback for kicking politicians like Adam Schiff and Eric Swalwell off their committees. Namely, they are shameless liars who abused their positions, and in the case of Swalwell, there are serious national security concerns with him being on the House Intelligence Committee.

BOOM: Joy Reid explodes and just shouts "not true" over and over when Byron Donalds explains that Social Security is on a path to insolvency in 2035: "Joy, I'm a financial profession. I do more than just Congress…I'm telling you. [It] will go insolvent." pic.twitter.com/DnqrGdEP5N

I wasn’t aware there was anyone out there who actually argued against the idea that social security is going to go insolvent eventually, but apparently, Reid is the one person. Her exchange with Donalds over the topic perfectly illustrates the problem with talking heads who read teleprompters for a living. They end up convincing themselves that they are an expert in every field when they are really only an expert at delivering lines written by a producer. Donalds knows what he’s talking about, and he has the actual financial background to endue his statements with some authority. Shouting “not true” isn’t an answer, especially when the coming insolvency of social security is so obvious for all to see.

As to the notion that Donalds should have rejected the nominations to Speaker he received, the question is why? If someone nominated me for Speaker of the House, I’d accept it too. How many black Democrats have been nominated for things in the past and have ended up falling short? Does that make them all “tokens?” According to Reid, it would, though she’d quickly move the goalposts to avoid owning that standard if the shoe was placed on the other foot.

Things didn’t get any better as the interview wrapped up. Reid decided to play the greatest hits (voter suppression!) while defending herself from a charge that she had previously accused Donalds of being “less black than other folks.” The problem? That’s exactly what she did so her entire song and dance came across as obfuscatory.

Joy Reid starts winding down the interview by filibustering Byron Donalds and complaining he was being "unfair" to have previously accused her of saying he's "less black than other folks" and invokes his 2020 election votes, not impeaching Trump, and opposing ballot harvesting. pic.twitter.com/rGzAedyi6P

Watching that last clip, I’m reminded that Reid is all flash and no substance. She clearly has her talking points down and knows how to get loud, but everything she says comes across as stale and devoid of reason. Donalds provides her with a correct definition of what Critical Race Theory is and Reid can only deflect to the ridiculous notion that it is the equivalent of teaching history. But then, in true leftwing fashion, she contradicts herself by claiming that CRT isn’t taught in K-12 schools.

Not only is that false, but it’s also a self-defeating argument. If it’s not taught in schools as Reid claims, then why is she worried about it being banned? Her protestations make no sense, and they show a person who is afraid to even embrace what they actually believe. I’d respect Reid a lot more if she just said “yeah, I like CRT, and it should be taught in schools.” Instead, she plays this silly game where she claims CRT isn’t taught but also that if it is, then it’s a good thing.

In the end, the contrast here was stark. Donalds answered the questions put before without turning into a raving lunatic. Meanwhile, Reid was just looking to deliver yet another heated monologue. Personally, I’m not a fan of Republicans going on these types of shows because I think it lends credibility to hacks that don’t deserve it. Donalds did well, but I wouldn’t make a habit of it.