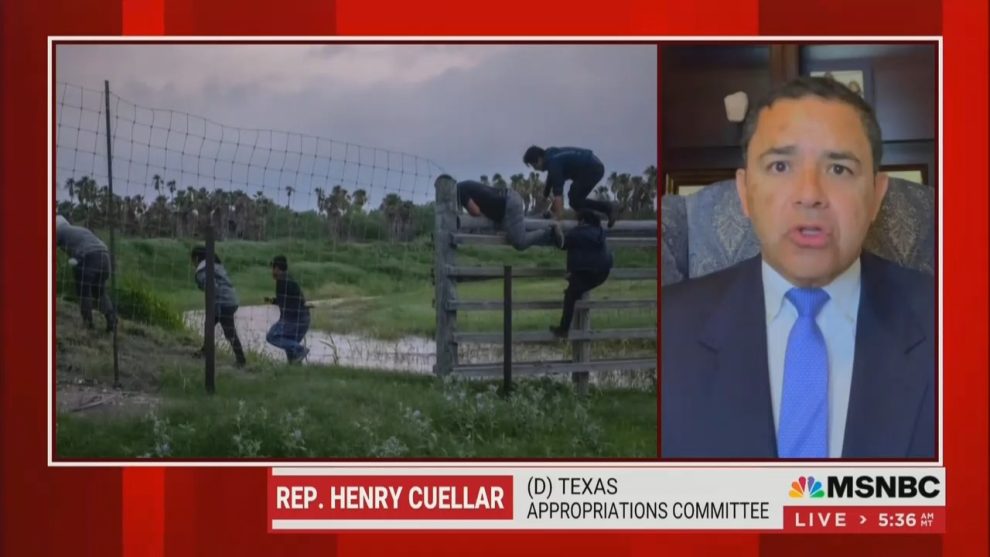 Rep. Henry Cuellar (D-TX), whose district is on the U.S.-Mexico border, responded to the latest numbers released by the Department of Homeland Security (DHS) on the crisis at the border by acknowledging that the border under the current Democratic administration is not secure.

DHS released the numbers from September late on Friday night. The numbers showed the highest number of illegal aliens ever encountered by DHS (227,547) during the month of September.

Cuellar was asked on “Fox News Sunday” to respond to Vice President Kamala Harris’ recent remarks that the border was “secure.”

REP. HENRY CUELLAR (D-TX): Thank you. And good morning to you, Shannon.

BREAM: OK, so you heard the numbers there. They came after 11 p.m. here in Washington on a Friday night. They are record breaking. I know you’ve talked with this administration repeatedly about the issue at the border, trying to get some help.

KAMALA HARRIS, VICE PRESIDENT OF THE UNITED STATES: We have a secure border in that that is a priority for any nation, including ours, and our administration.

BREAM: Congressman, based on your conversations with the administration, first, do you think the secure – the border is secure? And, secondly, do you think it is a priority for this White House?

On FOX News Sunday with Shannon Bream, Rep. Henry Cuellar (D-TX) offered up an honest assessment of the U.S. southern border: “The border is not secure” under the Biden administration. pic.twitter.com/vDgWoVeUnF

Look, I – I’ve talked to the administration a week before the December – this was in December of 2020 and I started telling the transition team in December of 2020, this is what’s going to be happening. You all have to be ready. And if we don’t have repercussion – we can be compassionate at the border, but you’ve got to enforce the law. And if you don’t return people, then this is what you’re going to have.

BREAM: Well, there’s been a lot of attention play — paid to El Paso. You heard Bill’s reporting there. They have been bussing migrants to other places, like New York, which has since declared an emergency because of the influx they’ve gotten.

El Paso reportedly not going to continue the bussing because there’s reporting out there that the feds are not going to send migrants to El Paso anymore, at least not in the numbers that they were.

Instead it appears they’re using something that they had criticized from the Trump administration as cruel and it’s actually a policy they’re currently fighting in court, Title 42. AP says this, with the increasing number of Venezuelans arriving at the U.S./Mexico border as the November 8th election nears, Biden has turned to an unlikely source for a solution, his predecessor’s playbook.

So, is it your impression that this administration is saying one thing publicly but doing things differently when it comes to actually handling the reality of what they’re seeing at the border?

CUELLAR: I think so. You know, with all due respect to the administration, you know, they said they want to get rid of Title 42, but Title 42 is used more than Title 8 to return people back. And if you look at what they’re doing with the Venezuelans, doesn’t that sound familiar, like the MPP, that is you wait outside before you come in, or you go through a port of entry. And notice that it’s the same thing in many ways, it’s the same concept. And I’ve always said that, look, we can spend all the defense on the one yard line called the U.S./Mexico border, but if we don’t go to their 20- yard line, work with Guatemala, work with Mexico and – and get them engaged so they can stop those folks from coming in, then they’re just going to be at our door steps and we’ve got to make sure that we understand the importance of securing our border.

BREAM: Want to put up some polling that shows where voters think Republicans have the advantage in handling issues. They give a 21-point advantage to them on border security. So, your opponent, Cassy Garcia, says that you say the right thing when it comes to the border, but she says you can’t point to anything concrete you’ve done.

CUELLAR: Well, you know, she’s not from my district, so she probably doesn’t understand what I’ve been doing in my district. I sit as the vice chair of Homeland Security. I’ll be moving up. In the Appropriates, I – I have money there for more border patrol agents, money for their mental health, money – money for child care, a pay raise for Border Patrol. I work very well with her husband, Mr. Owens (ph), which is a Border Patrol chief in Del Rio. He’s a friend of mine. He invited me to be the speaker when we had a graduation of the Border Patrol agents in New Mexico, in Articia (ph). So people know.

In fact, tomorrow, I’m announcing a $165 million Border Patrol checkpoint in Laredo. And so I can go on and on and on.

BREAM: Yes, they’ve got very difficult jobs. That — that poll, I want to put that up gain. It also, on the issue of the economy, it gives, on inflation, Republicans a 13-point advantage on how they’re handling that.

Now, this week, Democratic Senator Mark Warner said that there was too much spending in the American Rescue Plan. One of the top Democrats over on the House side with you, James Clyburn, said this week that of the trillions in new spending, quote, all of us knew that it would drive up prices.

Does he speak for you in that, do you have any regrets on voting for those trillions in new spending?

But I would say this, to help reduce the prices that we have right now, we got to focus on one of the biggest driver, and that’s oil and gas. I support the oil and gas industry because, in – in – in my place, my district, there is 40,000 jobs. We lower the prices of – of oil and gas. I was the one that passed — helped pass the ban on oil exports. So, we created more jobs here. We want to see domestic drilling here in the United States. You lower the price of petroleum, it lowers the price of fertilizer, it lowers the price of so many things that has an impact on our goods.

So, that’s what I’ve been focused on, what I can control. And that is having domestic drilling here in the state of Texas or in the United States.

BREAM: So many of the positions that you take, Republicans would say you should come join them and their party because so many of them are more aligned with them. You’re often described as only pro-life Democrat in the House. David Wasserman, a top election forecaster over at Cook Political Report says this about you. He is now pretty much alone as a conservative Democrat in the House.

Do you worry that people who hold your positions are being squeezed out of the Democratic Party? Is there a place for you?

CUELLAR: You know – you know, surely I’m a Democrat. I’m a conservative Democrat. I work in a very bipartisan way. I work with Senator John Cornyn on so many issues, on the border issues. We work together. And I think every party has the extreme. We have the extreme left. We have the extreme right. But some of us are not sent up to Washington to go make political statements. We’re sent to Washington to do the hard job, and that is govern. And you’ve got to work with Democrats and Republicans like my friend Tony Gonzales (ph). We sit on Appropriations and we work together. Michael McCall is another person that we work together.

So, there’s ways of working together and I think there is definitely room for a conservative, moderate Democrat like myself.

BREAM: Congressman, you are in a close race there. We’re all watching these House districts along the border. Your opponent, Cassy Garcia, we mentioned, she’s brought up the FBI raid at your home back in January. Is there anything you can say to clarify or explain that investigation or what’s going on there?

CUELLAR: Yes. You know, definitely there is — I’m not the target of the investigation. That is what my attorney has told me. And we – we’re going to go ahead and just move and focus on the election.

And I will tell you one thing, if you look at the numbers in the past, I usually do about 10 percent better than most state and national Democrats that run in my district. I’ll tell you why, because I get independent voters that come and support me and I get a lot of the moderate Republicans. And that’s what I’m going to do. I’m going to get independent voters. I’m going to get moderate Republicans. A lot of cross over, along with the Democrats, and we’re going to win this race.

BREAM: All right, Congressman, just a little more than two weeks to go. Yours is one to watch. We thank you for making time for us this morning. Great to speak with you.