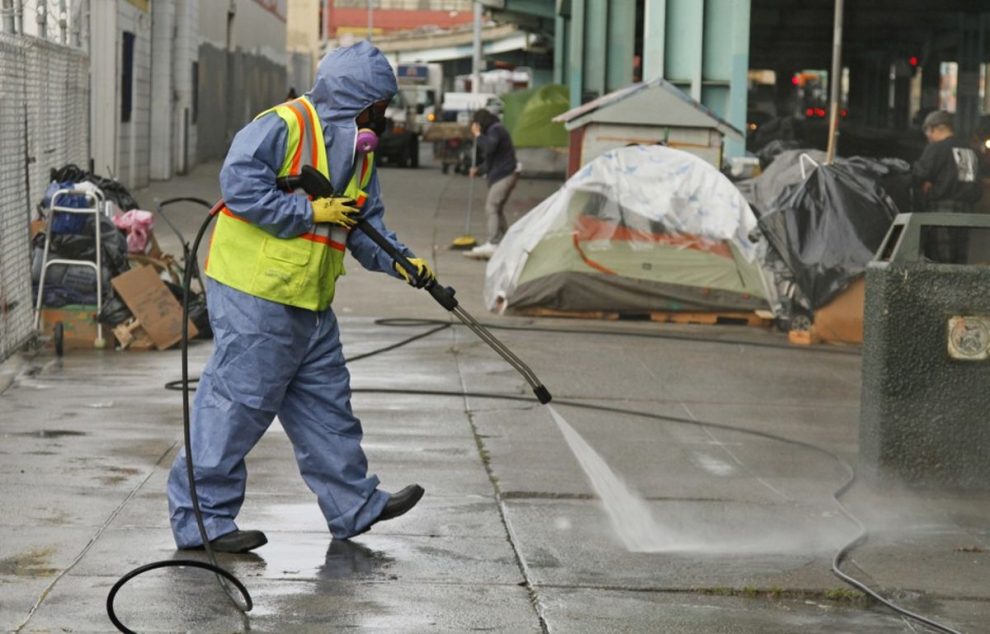 I used to enjoy comedy road trip gigs to the west coast. Portland was my favorite city, followed by Seattle. I haven’t been there in 10 years, and here is why.

Even as early as 2011, the writing was on the walls of Portland and Seattle. Homeless drug addicts were everywhere, as were their “calling cards.” As I was walking up to a Portland comedy club, I was shocked by the number of homeless people in the park across the street. It looked like a scene from Michael Jackson’s “Thriller” video but in a minefield of human waste.

Portland was always fun, but I couldn’t wait to get back to my home in New York City where homelessness wasn’t much of a problem. Mayor Rudy Giuliani cleaned up the town, Bloomberg kept up the good work, and tiptoeing through piles of human doody wasn’t much of a concern.

I don’t live in New York City anymore. I haven’t done a comedy show in the Big Apple since before the “pandemic.” It isn’t my lack of a vaccine passport that keeps me away; it has more to do with not wanting my pretty face opened with a boxcutter or having my oxfords (not brogues) slathered in street dung.

Eight years of “leadership” by Comrade Bill de Blasio has gutted yet another formerly great American city. Mayor Bloomberg left de Blasio a town that was in great shape. All de Blasio had to do was put the city on cruise control, but that was never his plan. Thanks to him, crime is rampant once again. Crazy, drug-addled homeless people rule the streets. Children have been slashed, women get raped, and people are being murdered in record numbers. If you’re planning on a weekend visit to New York, wear your boots because the sidewalks are once again a minefield of what I call “de Blasio street kabobs.”

If you’re lucky, the homeless will drop trou in a bucket and not on your feet. Welcome to The Big Crapple.

What is it with big, blue cities and their willingness to accept human waste on the streets? How and why is this tolerated? I grew up in Detroit in the 1970s. Things weren’t great but we didn’t have “Motor City cob-goblins” all over the sidewalks. I suspect if someone attempted such a launch, a neighborhood man or two would have pummelled the pig. These days, human waste is actually accepted as a part of life by liberals, no matter that kids might well wander into it.

TR International, a worldwide chemical company once based in Seattle, left town in part because they were embarrassed by business associates having to side-step homeless waste.

This is Philadelphia, the City of Brotherly Excreta.

Homeless people began carpet-bombing an NYC church back in 2017. #HolyS***

The church sprinkles bleach powder, and the bums retaliate with human feces https://t.co/mQlSQrjVwA

Do bolshie-Americans not realize how dangerous this is? More importantly, do they care? The World Health Organization (WHO) actually has people who study the effects of poor waste disposal. This is what they have to say:

The World Health Organization (WHO) estimates that 2.2 million people die annually from diarrhoeal diseases and that 10% of the population of the developing world are severely infected with intestinal worms related to improper waste and excreta management (Murray and Lopez 1996; WHO 2000a). Human excreta-transmitted diseases predominantly affect
children and the poor.

The Democrats have spent decades pretending to care about the poor. If allowing ankle-deep street feces is a sign of compassion, I’d hate to see their angry side.

Infectious disease expert Dr. Lee Riley conducted a study and determined San Francisco is as filthy as any third-world slum.

The contamination is much greater than communities in Brazil or Kenya or India. Riley notes that in those countries, slum dwellings are often long-term homes for families and so there is an attempt to make the surroundings more livable. Homeless communities in San Francisco, however, are often kicked out from one part of town and forced to relocate to another. The result is extreme contamination.

FACT-O-RAMA! San Francisco budgeted $30 million to clean needles and human droppings in the 2016-2017 fecal fiscal year. Also, it takes roughly 30 minutes to clean every pile of “San Francisco treat” off the sidewalks.

A 2021 Los Angeles clean-up crew picked up 180 lbs. of human scat and 544 lbs. of urine at L.A.’s Echo Beach. Venice Beach, once a groovy, beatnik beach, has become a human litter box.

FACT-O-RAMA! A 2019 report found that 80% of west coast beaches were contaminated with “biosludge,” which is a nice way of saying … you know.

Today I will have to clean up human feces in my driveway–for the 4th time. This kind of street squalor is common in Venice Beach.

It’s hard to find compassion for people who continue to vote for pinko politicians and their self-destructive “woke” policies. Leftists continue to support their apparatchik leaders even as their kids march to school through piles of Newsom’s mud-puppies. But hey, at least they aren’t voting for one of those bigoty conservatives who might literally clean up their streets.

“We see poop, we see pee, we see needles, and we see trash,” teacher Adelita Orellana told San Francisco’s NBC affiliate. “Sometimes they ask what is it, and that’s a conversation that’s a little difficult to have with a 2-year old, but we just let them know that those things are full of germs, that they are dangerous, and they should never be touched.”

The west coast is as woke as a methhead in a Red Bull factory, and we all know what happens when people and cities go “woke.”