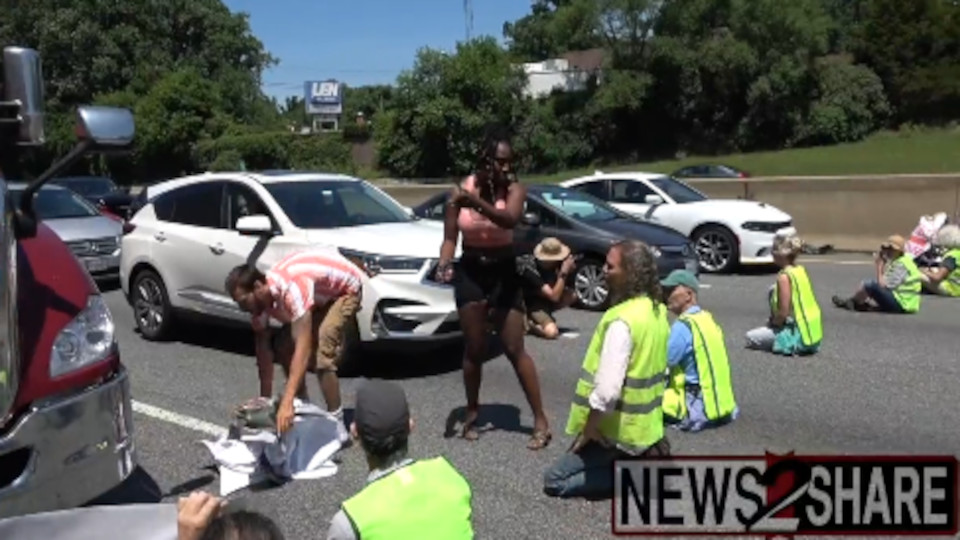 A group of activists on Monday blocked a highway in Maryland, not far outside of Washington, D.C., to pressure President Joe Biden into declaring a “Climate Emergency.” Unsurprisingly, they didn’t manage to accomplish that. But they did manage to accomplish something else.

“One lane, I’m asking one lane,” a man begged the protesters, who had stationed themselves in a row across I-495. “I’m going to jail for what you’re doing.”

That man, caught on video by T.J. Jones for the company News2Share, explained that he is on parole and would be re-incarcerated if he was late for work. The clip shows him growing increasingly desperate and confrontational; he was eventually arrested by Maryland State Troopers.

One agitated driver got physical with them while saying that he's on parole and could return to prison if late for his job. pic.twitter.com/iWSqTlnlSW

So while we still have no official climate emergency, we do have a bystander who may have just lost his freedom for the foreseeable future because he was prohibited from getting to his job by people who were illegally blocking a public interstate.

Parolees are subject to all kinds of ridiculous minutiae that threaten to turn them back into criminals for minor infractions. They’re often prohibited from drinking any alcohol, for example, and indeed risk being thrown back in prison for breaking rules they didn’t know were rules. It’s patently unfair that they may be returned to prison due to circumstances beyond their control. These government restrictions and inane consequences are worth protesting, but as with climate change, they cannot be improved by inconveniencing or endangering the people who experience them.

Such is par for the course with highway protests, which turn drivers into hostages. That isn’t limited to the parolee—who, I’ll add, is the type of person those on the left would usually fight for when the circumstances are more convenient. It also includes people experiencing medical and family emergencies and those in labor. In this case, one wonders how many hearts and minds came around on climate change as activists likely sent a man back to prison for the sake of a protest that didn’t move the needle one iota politically. I’d venture very few.

The typical reply is that protests aren’t meant to be convenient. That’s true. And the father of civil disobedience—Martin Luther King, Jr.—did it too, right?

Except no, not really. Though King did lead a protest from Selma to Montgomery, famously filling the Edmund Pettus Bridge, it was a march. It did not block interstate and highway traffic indefinitely for the sake of it—a tactic King was not comfortable with, despite pressure in the 1960s to get on board. “Even though King didn’t come out and criticize it in public, in private he thought it was a misguided tactic,” said Brandon Terry, assistant professor of African and African American Studies and Social Studies at Harvard University. “The NAACP thought it was ridiculous.” King reportedly posited that such a move pushed the boundaries of acceptable demonstrations and would come back to bite the movement politically.

It’s not difficult to see why he believed that. Take the activists this week who ostensibly flipped the bird to climate change. In reality, they increased emissions as cars idled on the roadway and possibly cost a man his freedom. Effective protesting, as King understood, has to do more than grab attention. It has to persuade.

Which is why he focused on civil disobedience—something these highway protests decidedly are not. To civilly disobey is to break an unjust law or rule and show the world the foolhardiness of having it enforced. Few serious people would argue that it should be legal to impede public roads. And that’s not what these protests are out to prove, anyway.

Blocking highways is dangerous no matter the target of the protester’s ire. Canadian truckers recently used the same tactic to push back on vaccine mandates, creating a traffic bottleneck on the busiest international crossing on the continent and cutting off some people from their livelihoods. Whether you’re protesting COVID dictates from the government, climate change, or the issue du jour, consider that your demonstration will not win hearts and minds if it’s hurting people.