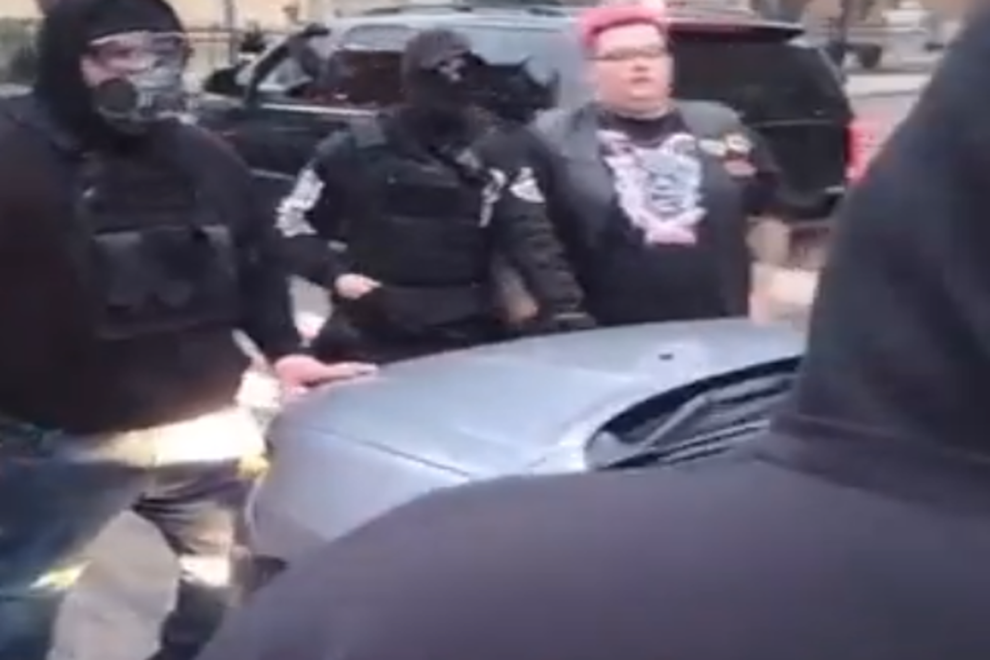 Black Lives Matter activists are protesting again, this time in Grand Rapids, Michigan. That follows an officer-involved shooting where a black male was fatally shot in the head.

Because there’s footage of the incident, we know what happened. The man in question, Patrick Lyoya, resisted arrest, but that alone would not be a justification to shoot. It was only after he attempted to take the officer’s taser, that the altercation turned deadly.

Grand Rapids Police Chief Eric Winstrom has released four videos of the fatal encounter that began when Lyoya, who was unarmed, was stopped for driving a car with a license plate that didn’t match the vehicle.

One clip showed Lyoya exiting the car, ignoring the officer’s commands, and trying to flee. He then tried to grab the cop’s stun gun during a struggle that lasted about 90 seconds before he was shot after the officer ordered him to “drop the Taser,” footage shows.

To summarize, the officer did have a legitimate reason to pull the car over. This wasn’t just for a broken tail light, and non-matching license plates are often a sign of a stolen vehicle. Once things escalated to a physical confrontation and Lyoya took the officer’s weapon, the situation fundamentally changed. If someone takes a weapon from a police officer, the response is going to be deadly force.

As to why he was trying to run in the first place, Lyoya had a long record of violent crime, including a conviction for beating a pregnant woman. It’s probable he was committing a crime when he was pulled over, given the discrepancy in the license plates and that he felt he would end up in prison if he submitted.

Obviously, Lyoya’s family is grieving just as you’d expect, but that does not mean this was an illegal shooting worthy of protest in response. Yet, as per usual, that’s exactly what we are getting.

Breaking: Far-left protesters surround a car on the road at the #PartrickLyoya protest in Grand Rapids, Mich. & threaten to shoot the driver. One person cocks his gun & they kick the car. #BLM #Antifa
pic.twitter.com/xg54jf1FPd

Recall that when the Freedom Convoy was happening up in Canada some months ago, those protesters were labeled as terrorists by not only the media but the government as well. Liberals across the United States denounced the protests for blocking traffic (which wasn’t actually happening most of the time) and suggested tyrannical measures to end it. Yet, despite all that vilification, no protester ever pulled a gun on a motorist and chambered a round for being on the street.

Yet, this BLM activist is seen doing so on camera, pretty clearly threatening to shoot someone, and the mainstream media aren’t going to mention it at all. I feel very confident in that prediction. Further, I bet this person isn’t even arrested. Why? Because there are two separate systems of justice in this country. If you are down for the “right” cause, you can get away with most things (or get a slap on the wrist). But if you are protesting for the “wrong” cause, you’ll be called a terrorist and possibly locked in solitary for years without a trial.

#BLM & far-left protesters try to force their way inside the Amway Grand Plaza Hotel in Grand Rapids, Mich. They’re pushed back by the security. pic.twitter.com/z3GA8naFxw

Regardless, let’s be honest about what this is. These BLM protesters do not care about the man who was shot. In fact, I’d go so far as to say that they relish these shootings because it gives them a reason to take to the streets and cosplay as revolutionaries. The facts don’t matter, only anarchy does.