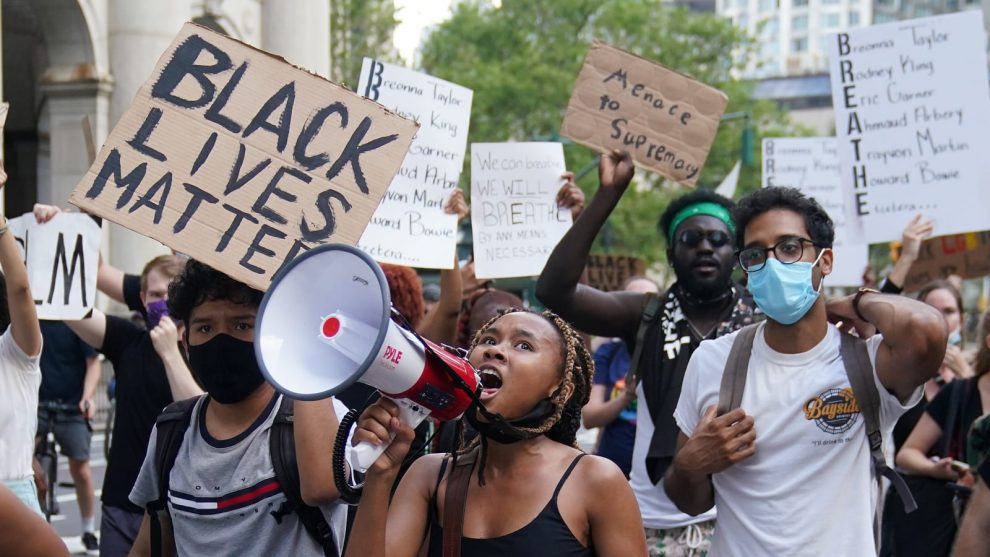 A video tweeted by #WalkAway Movement founder Brandon Straka shows a man wearing a Black Lives Matter shirt and a woman wearing a Defund the Police shirt allegedly assaulting a security guard at the Rescue America Rally. As the security guard attempts to detain his alleged attacker, other BLM activists jump in to free the man.

FOLLOWERS I NEED YOUR HELP!!!
BLM agitator infiltrated stage area of today’s rally then put his fist into security’s neck when being removed. @DallasPD ARRESTED THE SECURITY AGENT!! He’s been held for over 4 hours! Dallas PD not releasing security agent.
RT &DEMAND his release!! pic.twitter.com/ghMwZa4lFi

Before the alleged assault, Straka tweeted a video showing the crowd in attendance carrying #WalkAway signs.

Several hours later, WFAA’s Eric Alvarez tweeted his interview with Straka, who said the security guard had been arrested and held for several hours.

In the video you hear me say "I'm press!" and they left me alone. Members of Next Generation Action Network apologized and said the protest has now grown beyond their group. @wfaa

Later, in what Straka called “the most terrifying moment of my life,” he and his team members are confronted by another BLM group as they left the Dallas Police Department. They had been checking on the as-yet-unreleased security guard.

Straka tweeted, “My team &I went to the police to check on detained security agent. 30-40 BLM began throwing bottles at us & chasing us. They stole my employee’s phone &smashed it. We had to run for 4-5 blocks. All Dallas news stations were there.”

Despite being at a Dallas Police Department facility, no Dallas police officers appeared to be anywhere in the alleged attack vicinity. At the very end of the video, a black woman appears to run up and attack the woman shooting the video.

This was the most terrifying moment of my life. My team &I went to the police to check on detained security agent. 30-40 BLM began throwing bottles at us & chasing us. They stole my employee’s phone &smashed it. We had to run for 4-5 blocks. All Dallas news stations were there. pic.twitter.com/84ZWXtPo93

Straka identified the alleged attacker in the video above as Dominique Alexander @niquealex. Other news outlets refer to him by that name as well.

Violence breaks out in Dallas between Trump supporters holding a rally and Black Lives Matter counter protestors. Next Generation Action Network provided the video to @WFAA . The man wrestled to the ground is the group’s founder Dominique Alexander. pic.twitter.com/SYZvAvwLXB

The Dallas Morning News reported that as police placed Alexander in handcuffs he told supporters, “Call Chief [U. Reneé] Hall.” Officers then placed him in a squad car.

The BLM agitator’s name is @niquealex. While being arrested he said, “call @ChiefHallDPD”.
He has a relationship w Dallas Chief of Police!
The security agent is being held by Dallas police for DEFENDING crowd from a BLM attacker
CALL: 214-671-3001
DEMAND RELEASE THIS AGENT NOW!! https://t.co/RklCUPy2oy pic.twitter.com/WUUBKuI0QE

Brandon Straka of the Walk Away Campaign says the man seen in the video taking Alexander to the ground was a hired security guard. He says that man was also brought in for questioning and has not been released. @wfaa pic.twitter.com/7rqB55am87