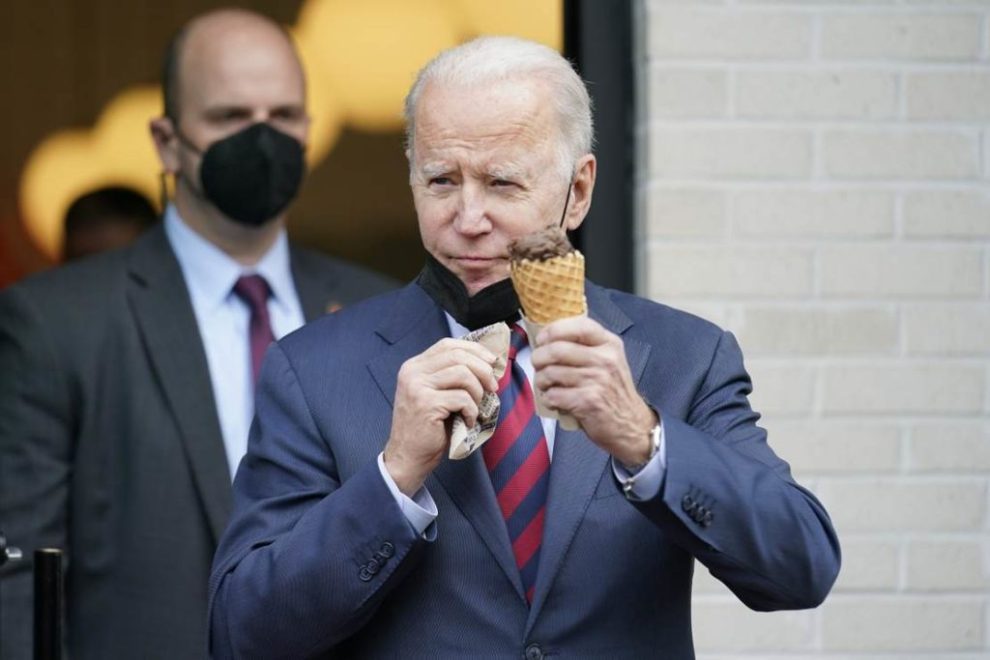 Joe Biden spoke at a DNC event on Monday night, which was his first, in-person fundraiser since taking office.

The speech was a mixture of rambling word salad and delusion, at a time with a war in Europe and skyrocketing inflation — two things you would think should be his predominant focus going into the midterm elections. But what did he spend his time talking about? The “existential threat” of climate change.

There don’t seem to be video clips; we have to rely upon the White House transcript. Now, we know that’s likely the ‘cleaned up’ version. We saw what they did to help out Kamala Harris , when she made a mistake and seemed to imply that Ukraine was a part of NATO. The White House added an imaginary “and” that Harris didn’t say, to try to make her comment more acceptable and cover up her mistake. That’s problematic, because the White House transcript is supposed to be the historical record and when you do that, you are changing the nature of what was said for purely political reasons to make her look better.

But in this case, even the transcript couldn’t save Biden, and showed what a jumble the remarks were. No wonder there are no video clips.

First, Biden couldn’t seem to get the name of his signature legislation right, which he must have said a million times and that has gone down to crushing defeat: “That’s why we have to pass the other provisions in my Better Back — Build Back America plan.”

Fox News contributor Steve Milloy provides a good “highlight reel” of some of the other problems.

Biden claimed that they were going to save Americans on average $500 per year, while they are spending all this money on their climate agenda. How’s that working now, with the promises that he’s made? Not only aren’t we saving money, but we’re also paying out a lot more.

Maybe some were taken in when he said things like this during the campaign. But most Americans aren’t going to buy this now.

Biden asked where we would be if Europe (presumably he means the EU) were fossil fuel-free now.

'Imagine where we'd be if we were free of fossil fuels.'

Most of us would be dead, Joe. Fool. 2/ pic.twitter.com/HDUFGAyn1M

He claimed they’d be completely independent. No, they would be completely dependent on Russian oil. We already see that that’s where they were heading before this — increasing their reliance on Russian oil while cutting back their production. It was ridiculous, just like it is here.

Even if the court rules against him, he’s got a pen and a phone. He’s going to take executive action anyway; who cares what the court says?

Sure the courts have ruled against me on climate, but I don't care. Democracy! 3/ pic.twitter.com/LIBaSaZEZA

Not to mention all the infrastructure and spending on charging stations. Plus, if he thinks that makes us “independent,” what about the coal the electricity uses, and the necessary materials like lithium that China has cornered much of the market on? We wouldn’t be on the hook to Russia; we’d be on the hook to China. By the way, where’s ol Joe’s electric vehicle? He has a gas-guzzling Corvette.

Biden claimed in the speech he had “perfect attendance” at “every climate crisis” in the past year-and- a-half. Alrighty, now.

Perfect attendance at 'every climate crisis.'

Then it went over the slide. Sorry, I don’t even begin to know what this word salad is supposed to mean.

But there weren’t tornadoes in Queens, NY. As we’ve noted before, Biden seems not to understand the difference between a tornado and a hurricane.

Again, this is his priority, as Americans tell him their priority is inflation; this is how confused and out of touch he is.

This, perhaps, says it all about what we feel with Biden at this point.

He thinks that’s a joke. But at this point, we all want to jump off the Bad Ship Biden–which is sinking fast.