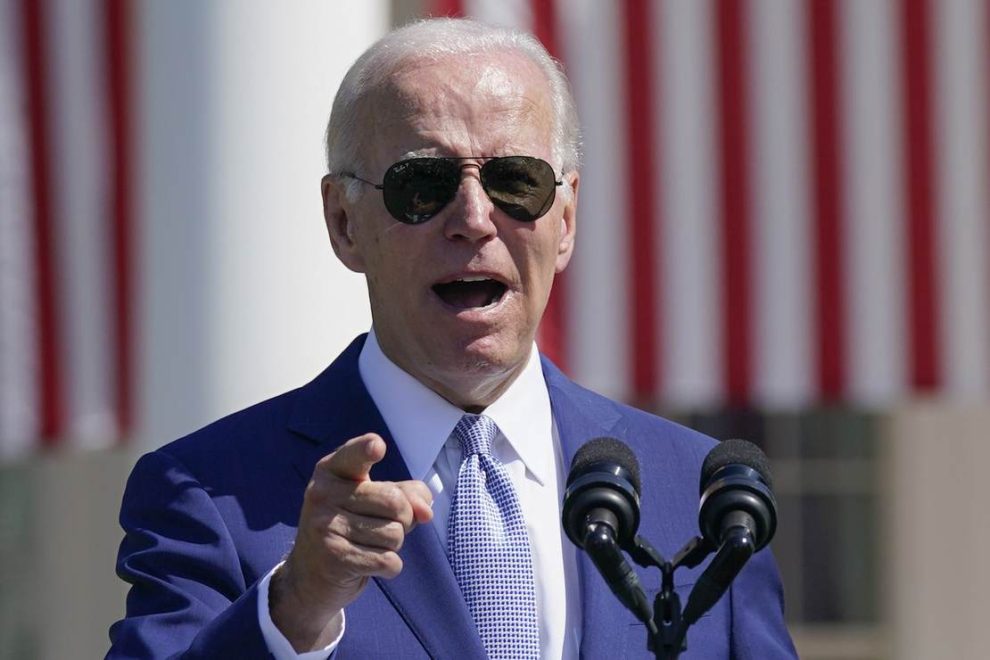 Old Joe Biden’s 9/11 speech at the Pentagon Sunday was a predictable mélange of false piety, feigned emotion, and paper resolve. The world will little note nor long remember what he said there, and deservedly so. And to his or her credit, the ostensible president’s speechwriter resisted the temptation to go even lower than usual and liken supporters of Donald Trump to the 9/11 hijackers. This was not, however, due to some sudden restoration of patriotism and fair play in the Biden White House; a decision was apparently made to cloak the attack on half the nation in more subtle tones than those Joe employed in his disgraceful black-and-red speech of September 1. But the attack was unmistakably reiterated.

“It’s not enough,” Old Joe self-righteously admonished his hapless audience, “to gather and remember each September 11th those we lost more than two decades ago. Because on this day, it is not about the past, it’s about the future.” Yeah? How’s that, Joe? By protecting the nation against future jihad terror attacks? By vetting the huge numbers of unvetted Afghan evacuees you brought into the country? By bringing some sanity to the Southern border, at which people on the terror watch list are frequently apprehended, with an unknowable number who’ve gotten through?

Come on, man! Biden didn’t, of course, mean any of that. “We have an obligation,” he continued, “a duty, a responsibility to defend, preserve, and protect our democracy, the very democracy that guarantees the rights and freedom that those terrorists on 9/11 sought to bury in the burning fire and smoke and ash.”

Ah, yes, 9/11 is not about the past, it’s about the future, in which we have to protect “our democracy.” Protect it from whom, Joe? The answer to that is blazingly obvious. In his September 1 speech declaring war against half the nation, he complained that “MAGA Republicans…look at the mob that stormed the United States Capitol on January 6th — brutally attacking law enforcement — not as insurrectionists who placed a dagger to the throat of our democracy, but they look at them as patriots.” He noted approvingly that “Federal Circuit Court Judge Michael Luttig has called Trump and the extreme MAGA Republicans, quote, a ‘clear and present danger’ to our democracy.”

The implication is clear. On September 11, 2001, Biden said, enemies of “our democracy” tried to bury our rights and freedoms “in the burning fire and smoke and ash.” And now, we must fight against the “insurrectionists who placed a dagger to the throat of our democracy” and their friends and allies who “look at them as patriots.” Like Kamala Harris, Old Joe was likening the 9/11 jihad terrorists, who murdered nearly 3,000 people, to his legitimate political opposition in the United States today. Joe’s speechwriter just did it a bit more subtly.

Continuing his dogwhistles to the authoritarian socialist Left, Biden called on them to work to defeat these enemies of the state. “And that takes a commitment on the part of all of us — dedication, hard work — every day. For always remember: The American democracy depends on the habits of the heart of ‘We the People.’ That’s how our Constitution — ‘We the People.’ The habits of heart of ‘We the People.’” The transcript wonks at WhiteHouse.gov cleaned up Joe’s speech at several points, but apparently by this time the exhausted editor had given up, and left “That’s how our Constitution — ‘We the People’” in all its incoherent glory.

Joe called for dedication and commitment: the supporters of Trump have to be faced down on a daily basis. “It’s not enough to stand up for democracy once a year or every now and then. It’s something we have to do every single day.” How, Joe? How will his friends and allies in Antifa and Black Lives Matter hear these words? Will we see an uptick in the political violence he professes to abhor, but to which he will turn a blind eye as always, because it comes from the Left, not from patriots?

The “our democracy” phrase is so frequently used by Leftists now that it’s easy just to let it go by unremarked. No one should do so. By “our democracy,” Biden and his henchmen do not mean our actual republic, but the empire of their political, social, economic, and cultural control. That’s what he called on his supporters to fight for on September 11, 2022. Buckle up.