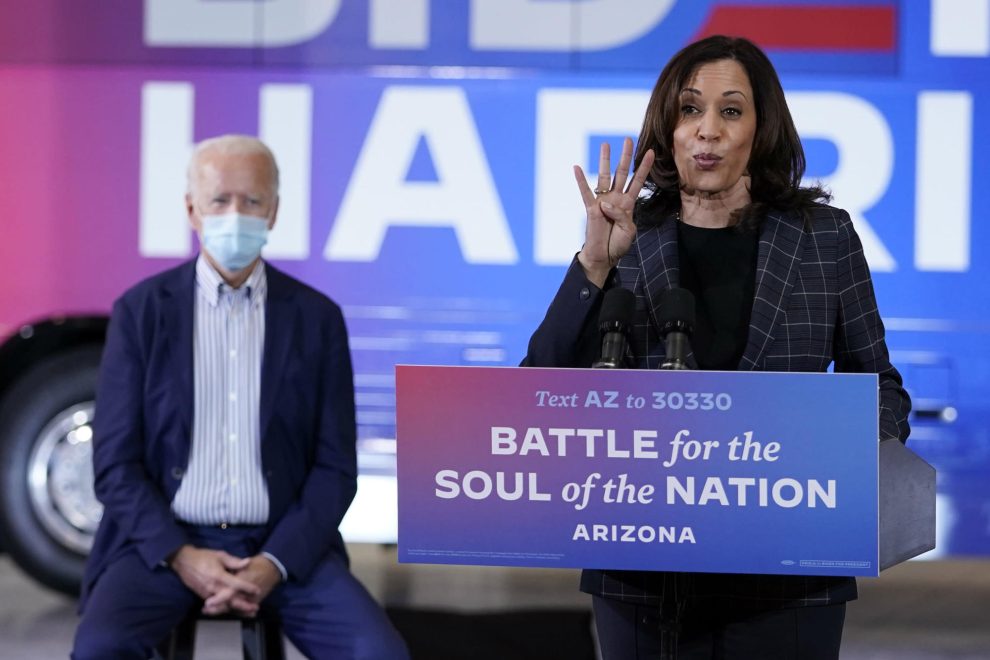 It’s almost like you have to feel sorry for the Democrat Party. I mean, the Democrats are stuck between a rock and a hard place — a “damned if you do, damned if you don’t” scenario — regarding replacing Joe Biden, Kamala Harris, or both. The sooner the better, say the most terrified among them.

Others are not so sure.

The operative word in the first paragraph is almost. The Democrats are going to hand the November midterms to the Republicans on a silver platter and will most likely do the same in 2024.

While I’m confident the Dems will get their asses handed to them in the midterms, I also believe the Repubs can and very well might snatch defeat from the jaws of presidential victory in 2024, but that’s another story for another time. Meanwhile, the rumors continue to swirl in the dysfunctional White House.

Those “swirling rumors,” as noted by Conservative Brief’s Martin Walsh, are that some of Biden’s closest allies are looking into the possibility of replacing Vice President Kamala Harris, whose complete lack of accomplishment as VP, coupled with her never-ending penchant for blabbering the most ridiculous of word salads, has become an albatross around the neck of the equally-inept president.

The solution? “Replace Harris.” Or is it?

The notion of replacing Harris would become instantly moot if Biden himself were kicked to the curb by the Democrat Party, which is not only terrified by his every mumbled word; but also fully cognizant that the buck-passing president’s failures and dogged refusal to take ownership of those failures is his real issue.

If the Democrats were smart — they are not; they are completely consumed with radicalizing America, despite disastrous poll after disastrous poll — they would show both of these colossal failures the door; the sooner the better (for Democrat election chances).

In an interesting May article for the New York Magazine Intelligencer, titled, “There Has to Be a Backup Plan. There’s a Backup Plan, Right? Inside the 2024 soul-searching that’s happening in every corner of the Democratic Party,” author Gabriel Debenedetti mused about the “reckoning” facing the Democrats.

With Trumpism re-ascendant, ambivalence about Biden’s age and political standing is fueling skepticism just as the image of his understudy, Vice-President Kamala Harris, dips even further than his.

The most recent analysis from the Los Angeles Times has her net approval rating at negative 11. The result is a bizarre disconnect within the Democratic Party, with two factions talking past each other.

One group consists of Biden and his loyalists, who are convinced that while the ticket’s numbers are undeniably bleak, they’re historically unsurprising for a president and VP facing their first midterm and will surely bounce back.

The second group comprises a broad swath of the Democratic elite and rank and file alike, who suspect that vectors of age, succession, and strategy have created a dynamic with no obvious parallel in recent history.

Quite the fix, isn’t it? It gets worse. More “mainstream,” as it were. [sarcasm]

Even CNN in November 2021 acknowledged the disconnect between Biden and Harris — which “The Most Trusted Name in News” blamed almost exclusively on Harris — in an article titled “Exasperation and dysfunction: Inside Kamala Harris’ frustrating start as vice president.”

Worn out by what they see as entrenched dysfunction and lack of focus, key West Wing aides have largely thrown up their hands at Vice President Kamala Harris and her staff — deciding there simply isn’t time to deal with them right now, especially at a moment when President Joe Biden faces quickly multiplying legislative and political concerns.

The vice president herself has told several confidants she feels constrained in what she’s able to do politically. And those around her remain wary of even hinting at future political ambitions, with Biden’s team highly attuned to signs of disloyalty, particularly from the vice president.

She’s a heartbeat away from the presidency now. She could be just a year away from launching a presidential campaign of her own, given doubts throughout the political world that Biden will actually go through with a reelection bid in 2024 […].

Finally, in a Monday Newsweek op-ed titled “Sorry, Democrats: We’re Stuck With Joe and Kamala,” Jason Nichols, senior lecturer in the African Studies department of the University of Maryland, simultaneously resigned himself to the total failure of both Biden and Harris, while also trying to prop them up:

It was the meme of the week: Joe’s gotta go. It felt like every liberal news outlet took part in a week of scathing critique of President Joe Biden and Vice President Kamala Harris, with many even from the President’s own party suggesting he commit to not running in 2024.

This is not to say that Joe Biden’s presidency has been entirely successful. Many feel he has been unable to secure important legislative victories or fulfill campaign promises, despite having a majority in both the House of Representatives and the Senate. President Biden also failed to secure voting rights or police reform, both big issues for African Americans, who also happen to be the Democrats most loyal and important voting block.

And yet, the truth remains that Democrats chose Biden and Harris to lead them. Quickly casting them aside would be politically disastrous because it would signal to the rest of the country that the Democrats by their own admission can’t choose someone to lead the nation.

Moving on from Harris also sends the message that Democrats made a mistake, and that she was actually not prepared to be president on day one.

Sorry, Democrats, but we are stuck with President Biden and Vice President Harris. We chose them, and now we need to stick with them. The cost of abandoning them is simply too great to bear.

Almost brings a tear to your eye, doesn’t it?

The Democrats knowingly nominated a candidate who campaigned from his basement, didn’t know what state he was in half the time when he was on the campaign trail, thinks every American has a right to “badakathcare,” and pledged to “lead an effective strategy to mobilize trunalimunumaprzure.”

And Kamala? Biden’s first (and only) priority was to choose a “woman of color.” Never mind that Harris’s mindblowing ineptitude and ridiculous word salads have become humiliatingly legendary.

How’d it all work out, Joe?