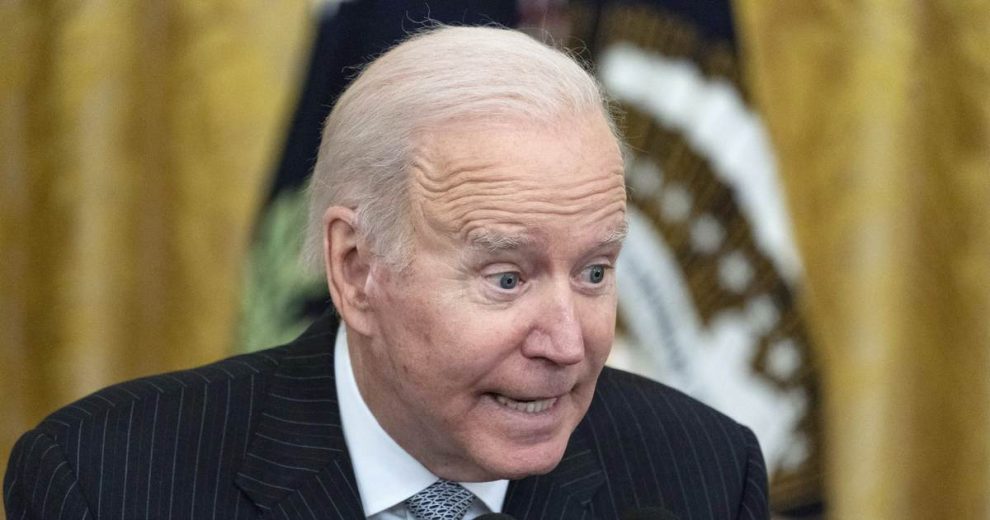 There’s a war going on in Europe. Ukrainian President Volodymyr Zelensky presented his case to Congress for more aid on Wednesday.

There’s crushing inflation that’s at a 40-year high, spurred on by reckless Democratic spending at home.

You might think that those issues would be taking up all the time of the guy who occupies the White House. Of course, Joe Biden doesn’t even want to acknowledge his fault in either event – the weakness that he showed to Russia that may have led to their willingness to test his resolve, and his profligate spending that led to the record inflation. He’s even blamed the inflation that has been going on for several months on Vladimir Putin.

But Joe Biden had another priority on Wednesday, and it just makes you wonder what the heck is going on in his mind with things like this. Biden said he’d established a “new civil rights cause of action.”

Biden discusses "a new civil rights cause of action."

"I bet everybody knows somebody…that in an intimate relationship, what happened was the guy takes a revealing picture of his naked friend, or whatever, in a compromising position and then blackmails…" pic.twitter.com/grsZSN0lKW

“I bet everybody knows somebody…that in an intimate relationship, what happened was the guy takes a revealing picture of his naked friend, or whatever, in a compromising position and then…blackmails…,” Biden declared.

Oh, my, one of those things you never expected someone in the office to say.

Um, no, I don’t know about you, Joe, but I don’t know personally know anyone who this has happened to. So, who is it that Joe Biden is speaking about here? What naked “friend” of Joe’s was caught in a compromising position and blackmailed? Or is he talking personally? Or about his son, Hunter, who seems to have been involved in all manner of sketchy activity that Joe could be blackmailed over?

What is he concentrating on, making naked cheaters a protected class now? What the heck is he talking about? Why would that be a “new civil rights cause of action”?

Maybe Biden is about to announce something that we don’t know about yet. Are we about to hear about even worse pictures on the laptop? The ones we already know about are bad enough. Blackmail material would be something else. And in case you think this is idle speculation, let’s flashback to a story I wrote last August about what Hunter Biden said on video, allegedly to a naked prostitute, about Russians having possible blackmail on him.

Hunter: ‘I think he’s the one that stole my computer. I think the three of them, the three guys that were like a little, like group. The dealer and his two guys, I took them everywhere. Fu**ing everywhere, crazy out of your mind sh*t.

‘The Russian [inaudible] she’d walk out with a fu**ing bathing suit in her hand.

Hooker: ‘How long ago did this happen?’

Hooker: ‘So it would have been out already if they-‘

Hunter: ‘No no no, because my dad [inaudible] running for president. He is, he is, he is. I talk about it all the time. If they do, he also knows I make like a gazillion dollars.’

Hooker: ‘They’d try to blackmail you?’

Hunter: ‘Yeah in some way yeah.’

That might just be a little important to what’s happening now. How does this factor into Joe Biden’s words and actions?