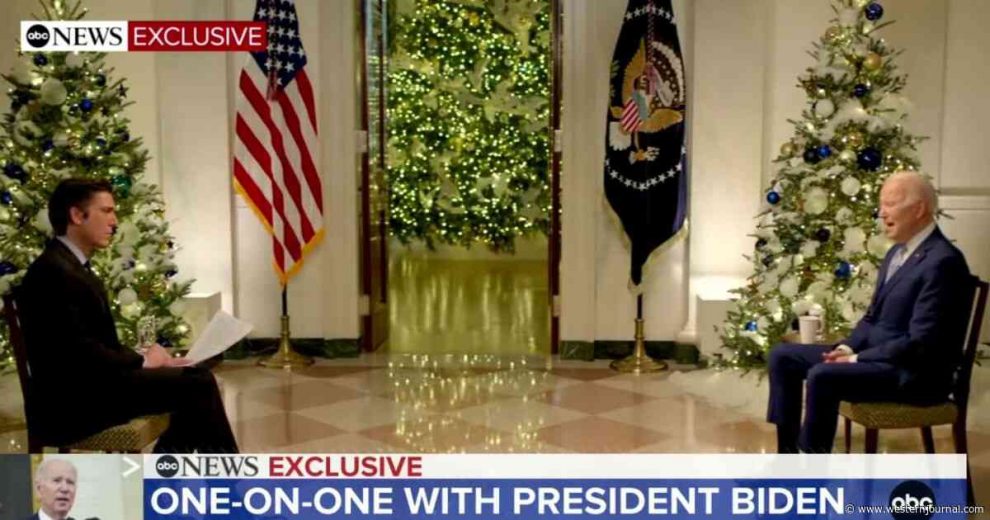 President Joe Biden was asked about the chances that he will run for re-election in 2024 and managed to give himself a noteworthy bit of wiggle room by mentioning his own health which, of course, might be a factor that you might imagine would have some bearing on whether or not he will seek a second term.

ABC News’ “World News Tonight” anchor David Muir asked the president on Wednesday night if he plans to run for re-election, to which Biden replied, “Yes.”

However, he added that he is nonetheless “a great respecter of fate” and this would depend on his health.

“Fate has intervened in my life many, many times,” Biden said. “If I’m in the health I’m in now — if I’m in good health, then, in fact, I would run again.”

This is a rather interesting comment, considering the president previously told Muir that he “absolutely” planned on remaining in office for eight years, as WLS-TV noted.

Has he just now suggested that, should his health deteriorate, he might not ultimately seek a second term? You’d think that the fact that the oldest sitting president in U.S. history just mentioned he would run if he’s in the health he is in now would warrant quite a lot of attention and media speculation.

After all, his health has been rather a concern since he first assumed office, and we can very easily imagine it would come up even if he didn’t routinely lapse into apparent bouts of senility in the middle of making public comments. He’ll be 81 by the time he will be expected to run for a second time and, should he win, will be 82 by the time he would take the oath of office anew.

Former President Donald Trump, who is no spring chicken at 75, appeared to concern many members of the media for his own health (and how it may or may not pertain to viability of using the 25th Amendment to get him out of office, to be specific).

And before Biden’s first physical as president, the White House fielded questions from the media as to when this routine physician’s visit might occur, because, you know, it’s not unreasonable for the American people to want to know how the incredibly old, absent-minded man we (supposedly) elected to lead the country is doing.

So isn’t it a fair mention on the part of these media outlets that Biden just appeared to use his already slightly dubious good health as a possible future safety net should he decide to wiggle out of a 2024 run?

Several major outlets that ran with the story failed to notice that he just essentially established the means by which he could ultimately decide not to run again without the appearance of breaking a promise by adding this little caveat about his health.

The Wall Street Journal ran with a headline focusing on the fact that Biden said it would up the chances that he’d run again if he’d be facing off against Trump, as did CNN, Newsweek, and Axios, while Fox News did note his comment about his health appeared to be a caveat and The Washington Post mentioned in passing he appeared to be giving himself “some latitude” in his answer.

None seemed to notice, or feel it was worthy of mention, that Biden basically just paved a means through which he can later easily claim he never really committed to a second run.

The media is likely too distracted by their efforts to preserve the façade that Biden has been the experienced, mature and strong leader our country needs after four years of Trump and the subsequent insanity his presidency induced.

Of course, that insanity was in large part of the media’s own making, and now they’re desperate to convince us that the president they propped up all the way to the White House isn’t bringing about more tangible instability and more disgracefully un-American public policy than the wicked Orange Man ever subjected us to.

Biden is staring down some abysmally low approval ratings as well as the one-year anniversary since he was sworn in behind riot walls, surrounded by National Guard troopers, promising American “unity” amid unprecedented animosity and division among Americans that he has done nothing to abate while in office.

He’s aggressively pursuing his unpopular, far-reaching federal vaccine mandates. He’s failed to “shut down” the virus and his presidency has seen more COVID-19 deaths than Trump’s last year in office did.

The migrant crisis is raging at the border, the families of the 13 service members killed during Biden’s disastrous withdrawal from Afghanistan will soon be celebrating the first in a lifetime of Christmases during which they will never again be joined by their fallen heroes, gas prices and inflation are soaring and small businesses are struggling to survive.

Meanwhile, families are being torn apart by the increasingly hostile rhetoric pandemic-era Democrats — most especially Biden himself included — are using to refer to those who still refuse to violate their medical freedom for the sake of complying with their health recommendations and mandates.

Should Biden run for office again, there is no guarantee the American people are going to forget how miserable the last year has been, and how glaringly awful the Biden administration is for our country despite all the shiny veneer the mainstream media tries to paint on its activities.

It’s incredibly telling that Biden just snuck in a little out for himself should the promise of running for office again appear even bleaker than it is now — but the establishment media either didn’t notice … or is hoping that we don’t.