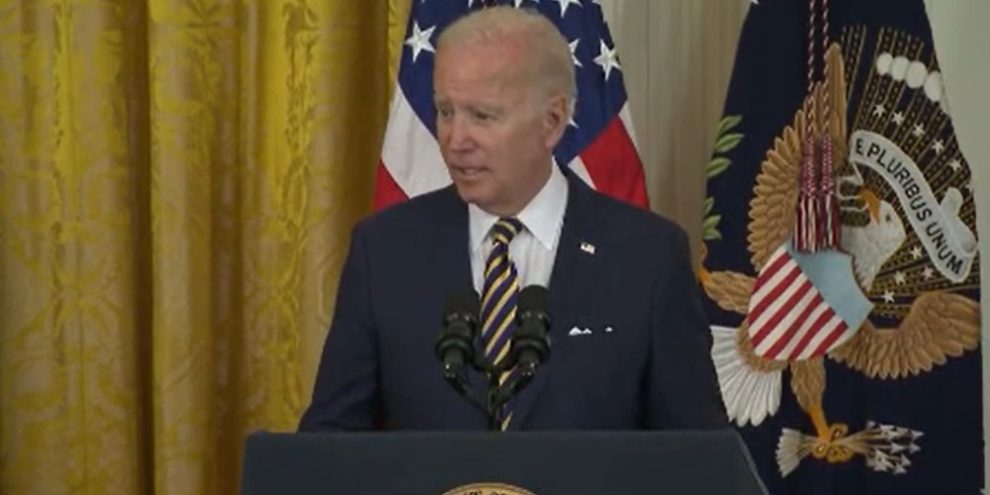 Biden said at legislation signing in the White House, “I just want to say a number: zero.”

“Today, we received news that our economy had 0 percent inflation in the month of July, 0 percent,” Biden added. “Here’s what that means: while the price of some things go up. went up last month, the price of other things went down by the same amount. The result? Zero inflation last month.”

We just received news that our economy had 0% inflation in July. While the price of some things went up, the price of others, like gas, clothing, and more, dropped.

“But people are still hurting,” he continued before repeating, “But 0 percent inflation last month.”

We just received news that our economy had 0% inflation in July. While the price of some things went up, the price of others, like gas, clothing, and more, dropped.

Biden then contradicted his own messaging by urging Congress to pass the Senate-approved Inflation Reduction Act, which he claimed would keep inflation “from getting better,” an opinion held by Conservatives and Republicans, before correcting himself to say “from getting worse.”

Perhaps Biden said “zero” as in “zero increase” in inflation but White House press secretary Karine Jean-Pierre tweeted the same original messaging: “We just received news that our economy had 0% inflation in July. While the price of some things went up, the price of others, like gas, clothing, and more, dropped.”

According to the New York Post, the latest 8.5 percent inflation figure reflects “a demand-driven decline in fuel prices — including gasoline, which hit a record national average of $5 per gallon in mid-June before sliding to a still-high $4 average today — that offset increases in the cost of food, rent, and other goods and services.”

Critics jumped on Biden and his administration’s claims calling them misleading, flat-out lies, and everything in between.

“Ridiculous BS from the White House,” tweeted Sen. Ted Cruz (R-TX). “There’s 8.5% inflation and basically everything anyone ever buys went up in price. This is just cruel gaslighting from the Biden admin.”

The Media Research Center tweeted the actual inflation rate and wrote, “Biden says there is 0% inflation. CPI was 8.5% for July.”

Rep. Virginia Foxx (R-NC) posted on Twitter, “The Biden Administration has a tortured relationship with math.”

John Cooper, director of media and public relations at the conservative Heritage Foundation, tweeted, “Joe Biden claims, multiple times, that there was ‘zero inflation’ in July. Absolutely false. Year-over-year inflation was 8.5% in July.”

Sen. Tim Scott, (R-SC), tweeted, “The price of food is up 10.9% from this time last year—another 40+ year high. President Biden can try to spin it however he wants, but the American people know that today’s inflation report is bad news.”

The Bureau of Labor Statistics reported the highest annual jump in food prices since the 1970s, with a 1.3 percent climb in at-home food costs from June to July and a 10.9 percent food-cost spike in the past year.

According to the report, “The all items less food and energy index rose 5.9 percent over the last 12 months,” referring to “core inflation.”

Annual inflation was 9.1 percent in June, the highest rate since 1981 which many blame on Biden’s policies, including massive spending bills.

The Federal Reserve has been increasing interest rates in an attempt to bring down prices with a target of approximately 2 percent annual inflation.