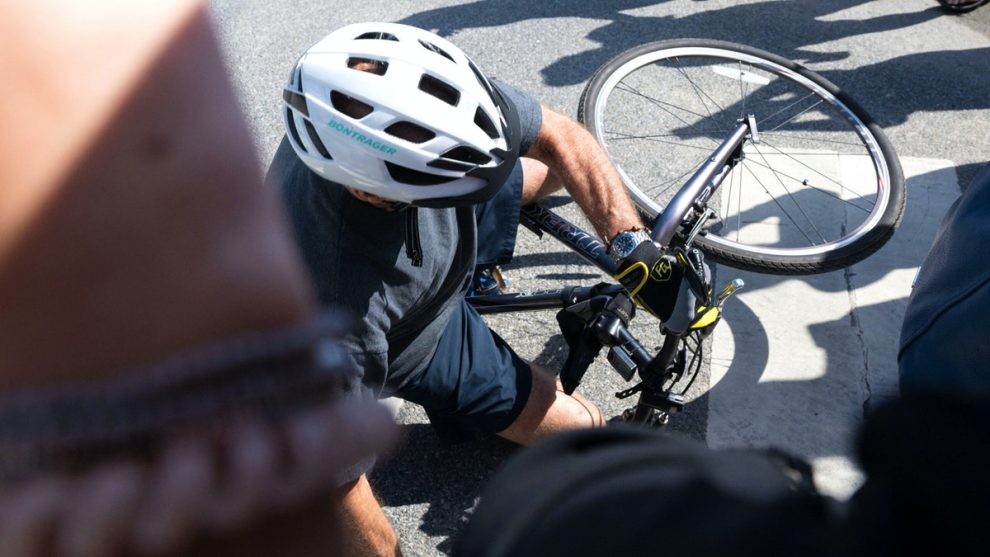 Democrat President Joe Biden fell on Saturday while he was partially standing on the ground after he had stopped his bike to talk with a group of people.

Biden was riding his bike near his Rehoboth Beach home when he fell. After he got up he claimed that he was “good.”

This is the latest incident where Biden has fallen. Last month, Biden nearly stumbled while walking up the steps of Air Force One.

The president, who is the oldest person to ever hold the position in U.S. history, began his presidency by falling down the steps of Air Force One.

Videos posted online showed Biden, 78, repeatedly stumbling while trying to walk up the stairs as he grasped the rail the entire time. Eventually Biden was able to get up the stairs and he turned around and gave a salute.

Joe Biden just fell 3 times in a row trying to go up the stairs to Air Force One pic.twitter.com/gTUTckUH32

Before taking office in January 2021, Biden claimed broke his foot after he fell while playing with his dog after he got out of the shower.

“What happened was I got out of the shower. I got a dog and anybody who’s been around my house knows — dropped, little pup dropped a ball in front of me. And for me to grab the ball,” Biden claimed during an interview with CNN. “And I’m walking through this little alleyway to get to the bedroom. And I grabbed the ball like this and he ran. And I’m joking, running after him and grab his tail. And what happened was that he slid on a throw rug. And I tripped on the rug he slid on. That’s what happened. Oh man, not a very exciting story.”

"I’m walking through this little alleyway to get to the bedroom and I grabbed the ball like this and he ran and I was joking running after him to grab his tail. And what happened was he slipped on a throw rug and I tripped on the rug he slid on" pic.twitter.com/o9ARgpJpfD

The White House released a statement following Biden’s fall in Delaware on Saturday, claiming that no medical attention was needed and that he would spend the rest of the day with his family.

“The President said, his foot got caught on the pedal while dismounting and he is fine. No medical attention is needed,” the statement said. “The President looks forward to spending the rest of the day with his family.”