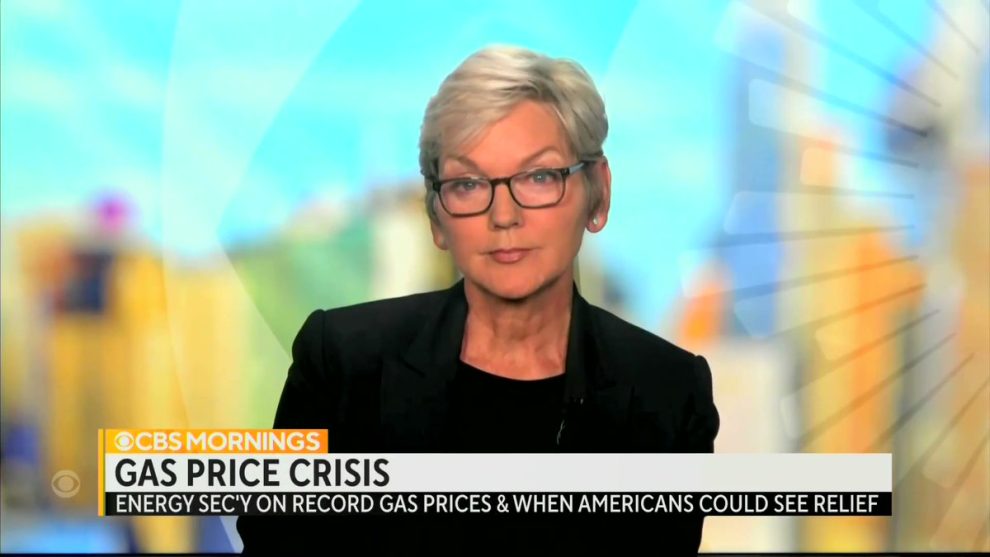 Gas prices are “unsustainable,” but there is no “quick fix,” Biden’s Secretary of Energy Jennifer Granholm said this week.

“I mean, I think the prices are unsustainable for many people right now. I mean everyday citizens who are on fixed incomes, paying huge amounts of money that they had not anticipated or budgeted for just to get to work,” Granholm said during an appearance on CBS Mornings.

“It is unsustainable for many and unfortunately, there’s not a quick fix. However, your point about also accelerating our progress toward clean energy is very, very important,” she added, suggesting that the current situation poses an opportunity to advance the Biden administration’s green initiatives.

"At what point do these [gas] prices…become unsustainable?"

ENERGY SEC. GRANHOLM: "Yeah, I think the prices are unsustainable…there's not a quick fix. However, your point about also accelerating our progress toward clean energy is very, very important." pic.twitter.com/rQVP54oeeX

Granholm, however, also made waves this week after asserting that rising gas prices serve as a “very compelling case” to purchase an electric vehicle.

“If you filled up your EV and you filled up your gas tank with gasoline, you would save $60 per fill-up by going electric rather than using gasoline but it’s a very compelling case, but again, we want to bring down the price at the point of purchase,” the energy secretary stated, even as she “recently served as director of an electric car company – and held millions in the firm’s stock,” according to the Daily Mail.

Granholm’s remarks come nearly a month after a contentious exchange with Sen. Josh Hawley (R-MO) during a hearing last month, where she continued to deny that the Biden administration had anything to do with rising gas prices, telling the Republican senator, “you can thank the activity of Vladimir Putin for invading Ukraine.”

“With all due respect, Madam Secretary, that’s utter nonsense,” Hawley responded as Granholm asserted, “It is not administration policies that have affected supply and demand.”

Her denial prompted Hawley to offer a brief reminder on Biden’s attack on American energy independence.

“And here’s what your president did when he first came to office,” the senator said. “He immediately reentered the Paris Climate Accord. He canceled the Keystone Pipeline. He halted leasing programs in ANWR. He issued a 60-day halt on all new oil and gas leases and drilling permits on federal lands and waters. That’s nationwide.”

“He directed federal agencies to eliminate all supports for fossil fuels. He imposed new regulations on oil and gas and methane emissions. Those were all just in the first few days. Are you telling me that had no effect on our energy supply?” he asked. But once again, Granholm remained defiant.

“Ninety-four percent of the oil and gas executives that were surveyed by the Dallas Fed said that administration policies had nothing to do with the increase in the price of oil,” Granholm responded.

“I’m not interested in opinions of these people. I’m interested in the facts,” Hawley said. “Are you telling me that these policies had no effect?”

The national gas price average stood at $5.014 as of Wednesday.