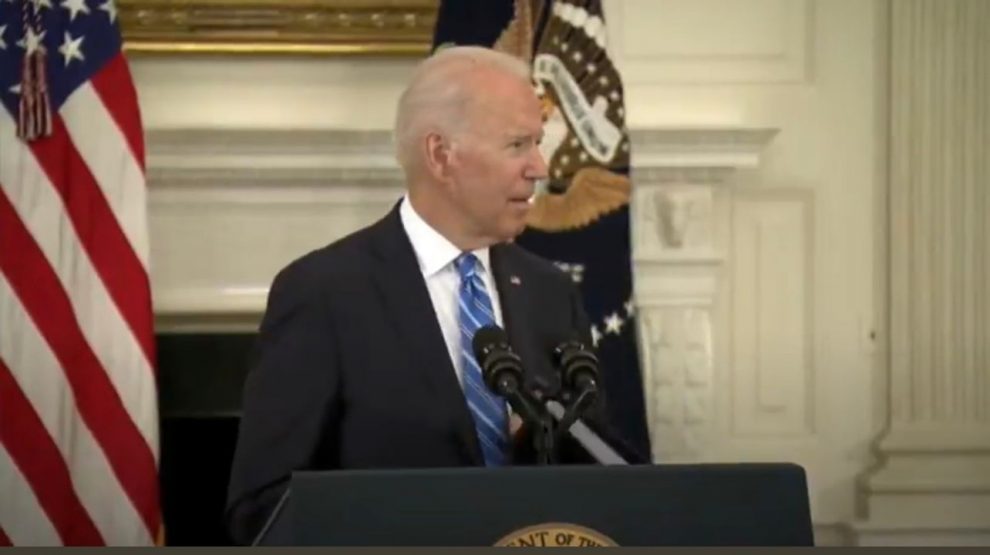 President Joe Biden took to the podium on Monday morning to discuss the state of the economy during his first six months in office. For the few reporters who got the chance to ask questions of the commander-in-chief at the end, it was his comments on Facebook, and not the economy, that were key.

“You said last week that companies and platforms like Facebook are ‘killing people’ by—” Biden was asked.

“I mean precisely what I said, I’m glad you asked me that question,” Biden said.

“My hope is that Facebook, instead of taking it personally that somehow I’m saying Facebook is killing people, that they would do something about the misinformation, the outrageous misinformation about the vaccine. That’s what I meant.”

“Have they done enough in your opinion to stop—” The reporter followed up, with Biden interrupting again.

“I haven’t, to be completely honest with you, I don’t know if they did anything today, up to over the weekend I don’t think they had, but I don’t know, I don’t know the answer to that question,” Biden said.

“Will you hold them accountable?” Biden was asked.

“When you say hold accountable, I just wanna, I’m not trying to hold people accountable, I’m trying to make people look at themselves, look in the mirror. Think about that misinformation going to your son, your daughter, your relative, someone you love, that’s what I’m asking,” Biden attempted to clarify.

It was on Friday that Biden said that social media platforms such as Facebook are “killing people” and the “only pandemic we have is among the unvaccinated.”

As part of his prepared remarks Monday, Biden touted jobs growth under his administration, “more than 3 million new jobs all told.”

He took aim at his detractors who claimed that his presidency would mean both an economic depression and an end to capitalism. “Capitalism is alive and very well,” he said. “We’re making serious progress to ensure that it works the way it’s supposed to work: for the good of the American people.”

Biden’s hand-out program to American families that have kids, he said “is a game changer, for some it’s a life saver.” Single moms who can’t afford dance classes or sports teams “need cash in their pockets today,” he said, and would “drastically reduce child poverty in America.”

“Our economic recovery,” he said, “hinges on getting the pandemic under control. And by fully vaccinated 160 million Americans, 80 percent of our seniors, we’ve fundamentally changed the course of the pandemic.”

Though his stated purpose of the speech was the economy, he quickly moved to discussing the pandemic and his administration’s push for vaccinations. “These tragedies are avoidable,” he said.

He addressed concerns that the US is facing “persistent inflation,” and the price increases that many Americans have noticed from the grocery store to the gas pump. “That’s not our view,” he said.

“Our experts believe and the data shows that most of the price increases we’ve seen were expected and are expected to be temporary. The reality is you can’t flip the global economic light back on and not expect this to happen.”

Biden said that there would be coming “global supply chain challenges.” But he said “these disruptions are temporary.” In the realm of superconductors, lumber, and in hospitality, he said, these increases have fallen back within normal ranges. Gas prices could stay above $3 per gallon all summer.

“If we were ever to experience unchecked inflation over the long term, that would pose a real challenge to our economy. So while we’re confident,” he said of his administration, “that isn’t what we we’re seeing today, we’re going to remain vigilant about any response that is needed.”

“Smart sustainable investments with appropriate financing,” Biden said, “while meeting the threat of climate change,” is the way forward to grow the economy “from the bottom up and the middle out.” Biden cited administration experts who agree with him.

“This is a blue collar blueprint for building an American economy back,” he said.