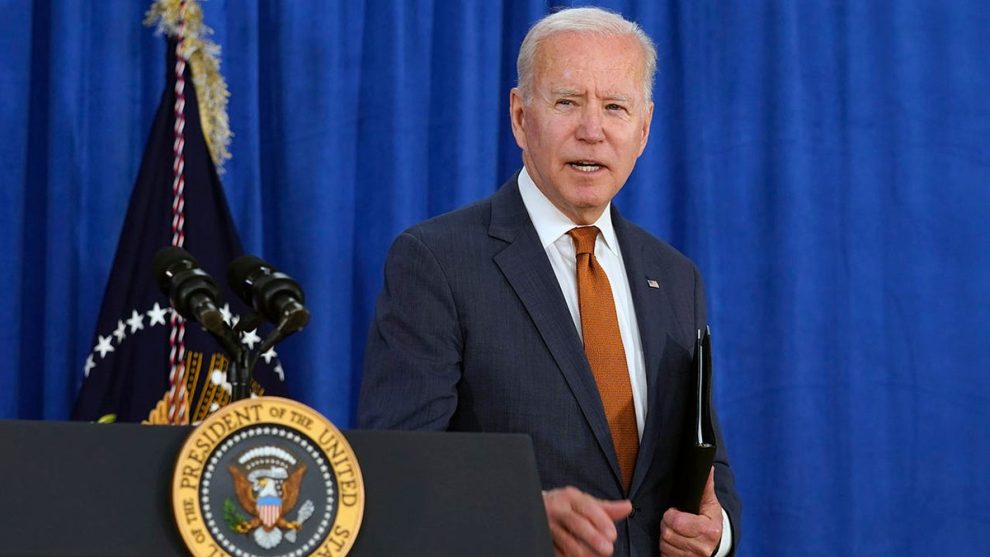 President Joe Biden on Sunday suggested that the gunman in the Colleyville, Texas, synagogue hostage situation obtained his weapon from the homeless population, then seconds later went on to push for gun control while talking with reporters in Philadephia.

Although the president admitted that he did not have all the facts of the case, in which a British national identified as Malik Faisal Akram engaged in a lengthy standoff Saturday at the Congregation Beth Israel synagogue that ended in his own death, Biden still felt free to comment on where Akram may have received gotten a weapon.

“I don’t have all the facts, nor does the attorney general. But, allegedly, the assertion was he got the weapons on the street,” Biden said, according to the White House transcript. “He purchased them when he landed. And — and it turns out there apparently were no bombs that we know of.

“But — and, allegedly, he purchased it on the street,” he added seconds later. “Now what that means, I don’t know. Whether he purchased it from an individual in a homeless shelter or a homeless community, or whether — because that’s where he said he was — it’s hard to tell. I just don’t know.”

Directly after those remarks, Biden then decided to turn things overtly political when a reporter asked about the “ramifications” for restricting gun ownership.

“The guns are — we should be — the idea of background checks are critical. But you can’t stop something like this if someone is on the street buying something from somebody else on the street. Except that there’s too — there’s so many guns that have been sold of late; it’s just ridiculous,” Biden said.

“And it’s because of the failure of us to focus as hard as we should and as consistent as we should on gun purchases, gun sales, ghost guns, and a whole range of things that I’m trying to do.”

Now, it’s entirely possible that Akram could purchased a gun “in a homeless shelter” or a “homeless community.” Illegal guns, like illegal drugs, can be purchased anywhere. But the real problems are anti-Semitism and apparently extremist Islamist ideology.

The hostage-taker, identified as 44-year-old Malik Faisal Akram, said he was a supporter of Aafia Sidiqqi, a Pakistani woman linked to al-Qaeda who is serving a lengthy prison term in Fort Worth, Texas, according to Fox News.

Even though Biden still wanted to dish out a progressive talking point, he said that he does not know the motive of the dead suspect who held four people against their will.

“No, I don’t. I — there’s speculation, but I’m not going to get into that. I will — I’m going to have a press conference on Wednesday, and I’ll be happy to go into detail of what I know in detail at that time.”

Hopefully, his news conference will focus on the constant peril of anti-Semitism globally and terrorism as opposed to stumping for a politically divisive cause.

If the president continues to move forward with a gun control narrative on this horrifying event, it will be lost in the partisan noise and lose the actual meaning.

According to The Dallas Morning News, Akram told authorities he wanted to speak to Sidiqqui, whose nickname is “Lady Al-Qaeda.”

The Islamic State Group and the Taliban have offered to trade hostages for Sidiqqi, the newspaper reported.

All four hostages, including Rabbi Charlie Cytron-Walker, were safe after the hours-long incident.

In another statement, according to The Associated Press, Cytron-Walker said the synagogue’s security training had helped him and the other hostages survive.

“In the last hour of our hostage crisis, the gunman became increasingly belligerent and threatening,” Cytron-Walker’s statement said, according to the AP. “Without the instruction we received, we would not have been prepared to act and flee when the situation presented itself.”

Meanwhile, the FBI is continuing its investigation.

“The FBI’s Evidence Response Team (ERT) will continue processing evidence at the synagogue. At this time, there is no indication that other individuals are involved,” FBI Dallas told Fox News in an email.