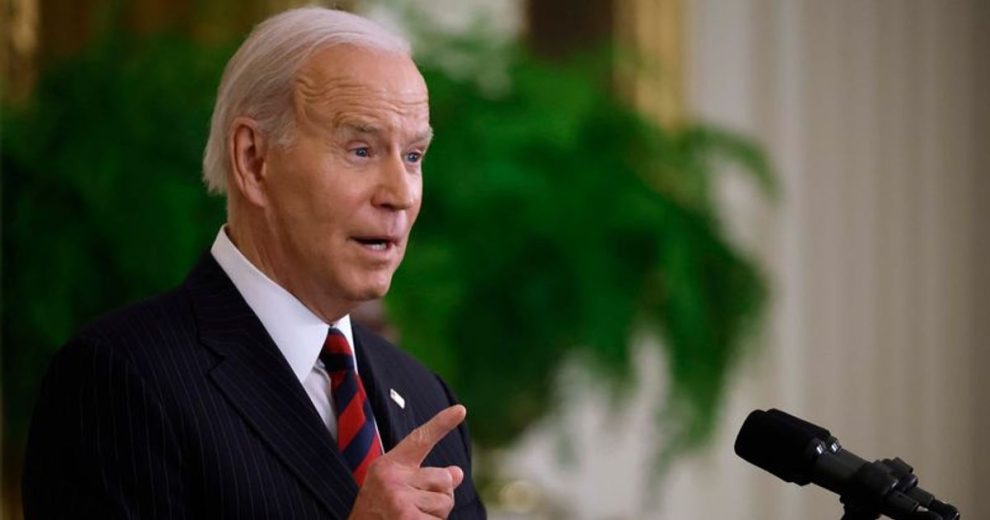 It is the uncomfortable experience of watching a cognitively impaired senior citizen thrust into the spotlight by unseen handlers, while the policies he rubber-stamps destabilize the nation and the world. Biden is clearly not lucid enough to understand what catastrophes he reads off the teleprompters.

It’s even worse when Biden tries to improvise. While speaking at an equal pay event on Tuesday, Biden managed to misspeak his way into mistakenly announcing he has COVID-19.

He did not even realize the gaffe until it was explained to him.

Even as the pandemic abates, infections are still reported. According to Fox News, the second gentleman, Kamala Harris’s husband Doug Emhoff, tested positive for the coronavirus Tuesday.

Harris has not tested positive, but is staying away from Biden. Harris skipped the remarks she was to make at Tuesday’s event.

The White House described the event as Equal Pay Day, a commemoration of March as Women’s History Month.

Biden tried to explain the vice president’s absence and the change in speakers, and botched it.

“But there’s been a little change in the arrangement of who’s on the stage because of the first lady’s husband contracting COVID,” Biden said, according to a White House transcript.

The “first lady’s husband” would be the president. In effect, Biden was announcing that he himself had contracted the disease.

A voice from offstage had to correct Biden. (The transcript identified the voice as belonging to Jill Biden, the president’s wife and the actual “first lady.”)

Washington Examiner reporter Jerry Dunleavy shared a clip of the confusion on Twitter.

“…a little change in the arrangement of who is on the stage because of the First Lady’s [Jill’s] husband [Joe] contracting Covid… She [Jill] is fine. It’s me [Joe]… The Second Lady [doesn’t exist]. The First Gentleman [Kamala Harris’s husband Doug Emhoff is Second Gentleman].” https://t.co/OtvTi1IvJR

Dunleavy also provided a useful translation of the rambling misstatements: “’…a little change in the arrangement of who is on the stage because of the First Lady’s (Jill’s) husband (Joe) contracting Covid… She (Jill) is fine. It’s me (Joe)… The Second Lady (doesn’t exist). The First Gentleman (Kamala Harris’s husband Doug Emhoff is Second Gentleman).’”

There’s nothing funny about the many errors Biden makes. Some are made as attempted excuses, like when Biden said billions in government spending did not cause record-breaking inflation.

Sometimes the mistakes are a lack of self-awareness, such as when Biden lapses into a creepy whisper for emphasis during speeches.

Most troubling are the many incidents where Biden seems lost in words or actions, unable to remember and follow simple instructions. He shows no capacity for leading. These are not reassuring traits in a commander in chief during chaotic times.

The introductory incoherence was not an isolated incident. On Twitter, Kyle Martinsen gave a summary of the many slips in one 14-minute speech.

During a 14-minute speech just now, Biden announced he has covid (he does not), said Kamala is the "first lady," called Doug Emhoff the "second lady," forgot his UN ambassador's name, and forgot what state his Energy Secretary was governor of.

The 25th Amendment was written for a reason: There are going to be times when the country’s chief executive is simply too incapacitated to fulfill the responsibilities of the position. It’s shocking evidence of systematic corruption and failure that Biden is still in that role.

The American people have no confidence in Biden. Even worse, hostile nations — such as Russia, China and Iran — see his weakness as an opportunity. Biden’s competence is ultimately a national security issue.

These goofs are no laughing matter.