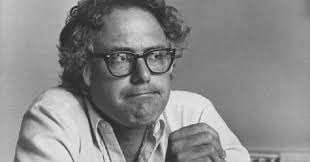 Bernie Sanders was asked to leave a hippie commune in the 1970s because he sat around talking about politics instead of working.

A new book chronicles the rise and fall of the “Myrtle Hill Farm” in Vermont. Called We Are As Gods, author Kate Daloz was raised near the commune in the 70s in a geodesic dome. Her parents were friends with the commune residents.

According to the book, the commune was visited in the summer of 1971 by a 30-year-old Bernie Sanders, the Washington Free Beacon is reporting.

He was researching an article for his Socialist Liberty Unity Party’s propaganda paper. He wanted to learn more about natural childbirth. Interest in alternative medicine was strong among members of the counterculture as part of their wider suspicion of modern science, which was associated with the sterility of hospitals and the destruction of war. “Many elements of Western medicine came under suspicion during this period, but none more so than modern obstetrics,” Deloz writes.

Sanders was particularly interested in a commune resident who had recently given birth.

See also  Ghislaine Maxwell Sentenced to 20 Years in Prison
→ What are your thoughts? ←
Scroll down to leave a comment: