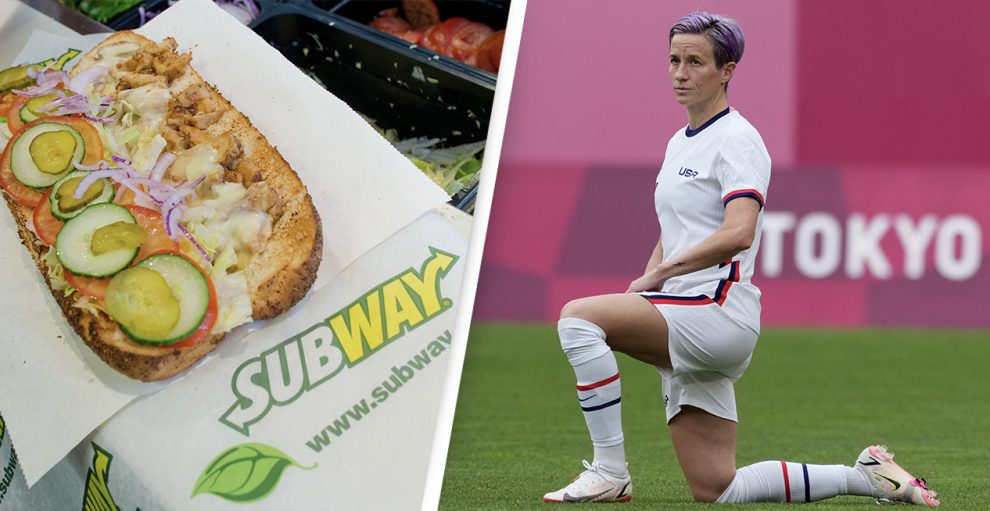 The Subway fast-food chain has been struggling — even before the coronavirus — but many franchise owners also felt that hiring U.S. soccer star and national anthem protester Megan Rapinoe as a national spokesperson was no help at all.

According to a report in the New York Post, Subway lost 1,043 outlets in 2021, which was more than the new outlets they opened.

The loss only added to the 1,609 lost in 2020 at the height of the coronavirus hysteria and the 999 lost in 2019. The number of closed restaurants means that Subway’s national footprint has contracted 15 percent since 2019 and 22 percent overall since 2016.

In contrast, McDonald’s only contracted 3.4 percent over the last few years during the COVID mess.

So, what is going wrong? Well, some franchise owners feel that hiring Megan Rapinoe was just one of the contributing factors to Subway’s mounting woes.

But franchise owners were extremely unhappy with the decision.

Indeed, the struggling fast-food company was met with an organized boycott by customers who were upset that Subway would choose to laud a woman who attended an Olympics on foreign soil only to protest against the country that made her rich.

Some franchise owners were furious that Subway chose such a radical and controversial political figure to push their product.

“Spending our money to make a political statement is completely and totally out of bounds,” one Arizona franchisee reportedly complained last year.

Another Subway location owner shared a boycott notice that a customer had taped to the store’s door with the media.

“The ad should be pulled and done with,” another franchisee wrote of Rapinoe’s national commercial. “It gets tiring apologizing.”

Subway never officially responded to the complaints about the Rapinoe spots, but they didn’t play very long. Regardless, the company’s foothold in the U.S. market continues to slip, and hiring people who are perceived as anti-American like Rapinoe is not helping reverse the decline.