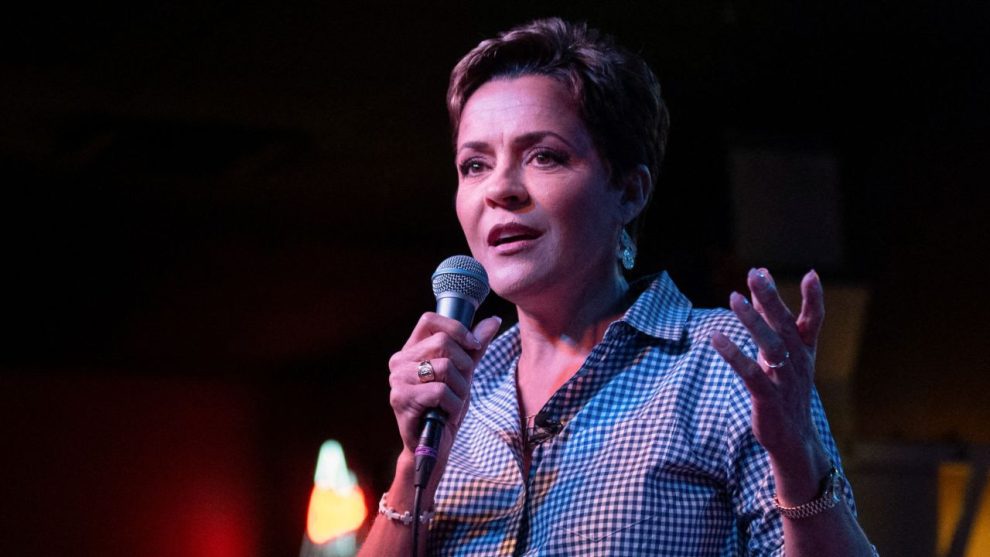 Kari Lake appeared in court today for an Emergency Hearing in her lawsuit against Katie Hobbs and Maricopa County Elections officials, contesting the stolen Midterm Election in Arizona.

The Gateway Pundit has written numerous reports on Kari Lake’s historic lawsuit to nullify and overturn the stolen Midterm Election or hold a new election free from conflicts of interest.

The Gateway Pundit reported that a Runbeck whistleblower revealed in Lake’s filing that HUNDREDS OF THOUSANDS of ballots had no chain of custody documentation. This is a shocking and massive violation of the law. Twenty-five thousand ballots were added to Maricopa County’s totals after election day with no explanation of why the number of remaining ballots could increase. Tens if not HUNDREDS of thousands of mail-in ballots with mismatched signatures were illegally counted in violation of Arizona law.

No honest person believes this election was run fairly.

Kari Lake sent out a press release yesterday highlighting critical findings from the lawsuit she filed on Friday, seeking to nullify and overturn the election or hold a new election free from conflicts of interest.

As reported earlier, Judge Peter Thompson ordered Kari Lake and Defendants Katie Hobbs, the Maricopa County Board of Supervisors, and Elections Directors to appear in court in Kari Lake’s election contest lawsuit against them.

According to Save America attorney Christina Bobb, the County was given until Thursday to file a motion to dismiss, and Lake’s response is due on Saturday.

The trial is set for next week.

Real America’s Voice correspondent Ben Bergquam shared a recording of the Judge’s decision, giving each side one hour for oral argument on December 19. The County previously requested that the allotted time for oral argument be cut in half to one hour total for both arguments.

Breaking in @KariLake lawsuit: Maricopa County asks judge to seal evidence of signature verification from public. Judge grants request, as he says, “errors on the side of caution.” @katiehobbs @stephen_richer & @billgatesaz don’t want you to see what they allowed!@RealAmVoice pic.twitter.com/SGR28OhPIN

Kari Lake attended the meeting today. Katie Hobbs was AWOL, just like during the election.

Katie Hobbs campaigned from her basement and refused to debate Kari Lake. No honest person believes that she legitimately won this election.

.@KariLake showed up to the emergency hearing for the Lawsuit.@katiehobbs did not.

Hobbs and Maricopa County’s attorneys did everything possible to make this case seem illegitimate and prevent a trial where evidence is presented.

They are terrified that this judge will approve the requested relief, allowing plaintiffs to inspect Maricopa County ballots from the 2022 general election, including ballot signature envelopes and the corresponding signatures on file with Maricopa County, prior to trial, and examine the causes and extent of the printer-tabulator problems encountered on election day;

.@katiehobbs legal team & @maricopacounty are desperately trying to get this case dismissed before the judge & all counsels can review the evidence.

The judge continues to note the shear volume of the evidence that was collected.

They outright said they don't want us looking at the ballots.

They know they won't hold up to any scrutiny at all.

At one point, the defense council was so desperate to discredit the evidence and stop a hearing from occurring that the judge had to shut them up by asking them to stop advocating.

The council for Katie Hobbs and Maricopa County also referred to Katie Hobbs as the “Governor-Elect” throughout the hearing. The dying election fraud regime will never give up the hoax.

The best part (and the judge said it after I said it watching) was when the county lawyer said a long hearing/trial would interfere with her being sworn in. He called him out for advocating. That was fully inappropriate

The judge gave equal time to Kari Lake and the defendants, allowing for a hearing and objections to be filed, and he did not allow the defendants to interject their irrelevant opinions into what was meant to be an administrative scheduling hearing. This was a fair hearing.