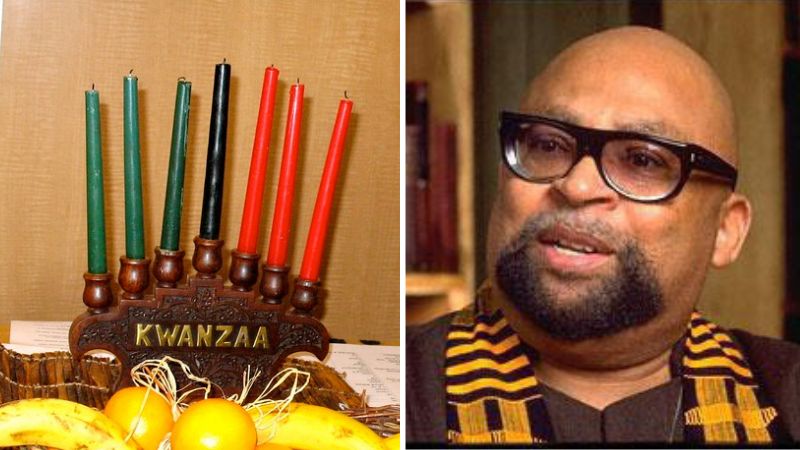 Kwanzaa, a holiday literally invented in 1966 by a convicted felon who tortured a woman in his captivity, is “older than Christmas and Hanukkah” according to an Atlanta Journal-Constitution article “What is Kwanzaa? 7 enlightening facts about the holiday” written by Ashleigh Atwel and published on December 7.

Kwanzaa was invented by Maulana Karenga, born Ron Everett, who was the leader of a black nationalist group that was prevalent in the ’60s called the United Slaves. Karenga was an avid Marxist who was convicted on felony counts of assault and false imprisonment.

Karenga took the name Kwanzaa from the Swahili phrase “matunda y kwanza” which translates into “first fruits of the harvest.” In her article, Atwel quotes a 2000 interview Karenga did with Belief.net where he said, “A central model for Kwanzaa is umkhosi or the Zulu first-fruit celebration which is seven days and is celebrated about this time,”

I have consistently said that AJC is the worst city newspaper in America, and I am glad to see they are maintaining their status. Google is too pic.twitter.com/fsBkKQpkrS

Karenga continued, “Other first-fruit celebrations were celebrated at the end of the old year and the beginning of the New Year such as Pert-em-Min of ancient Egypt. So, Kwanzaa’s model is older than Christmas and Hanukkah and thus does not borrow from them or seek to imitate them.”

Kwanzaa’s window dressing is an exact mish-mash of Christmas and Hanukkah. Like Hanukkah, it is celebrated across a series of days (although seven instead of eight) with a candle lit each night. Kwanzaa candles are meant to represent feelings and broad ideas like purpose and unity. Then at the end of the seven days everyone celebrates by giving gifts, like Christmas.

Karenga created the holiday because he believe Christmas was too white. Christmas is a tradition honoring the birth of the Son of God, according to Christian doctrine, who was also man. The doctrine of Christianity, which originated in the Middle East, explicitly states it is for all nations and is designed to transcend color, ethnicity, and creed.

But Atwel quotes a Time piece where Karenga said he created Kwanzaa because black people had no holidays of their own.

A Federalist article titled, “Kwanzaa Is A Fake Holiday Invented By A Criminal Marxist” notes that leftists inflate the holiday’s cultural significance despite the criminal past of its creator. One example is the Los Angeles Times Op-Ed, “The dark side of Kwanzaa’s founder can’t extinguish the holiday’s beacon.”

In 1971, the Los Angeles Times quotes the testimony of one of Karenga’s victims: “Deborah Jones, who once was given the Swahili title of an African queen, said she and Gail Davis were whipped with an electrical cord and beaten with a karate baton after being ordered to remove their clothes. She testified that a hot soldering iron was placed in Miss Davis’ mouth and placed against Miss Davis’ face and that one of her own big toes was tightened in a vise. Karenga, head of US, also put detergent and running hoses in their mouths, she said. They also were hit on the heads with toasters.”

Karenga’s concept of Pert-em-Min comes from the Egyptian Book of the Dead, popular in Barnes and Noble discount aisles.