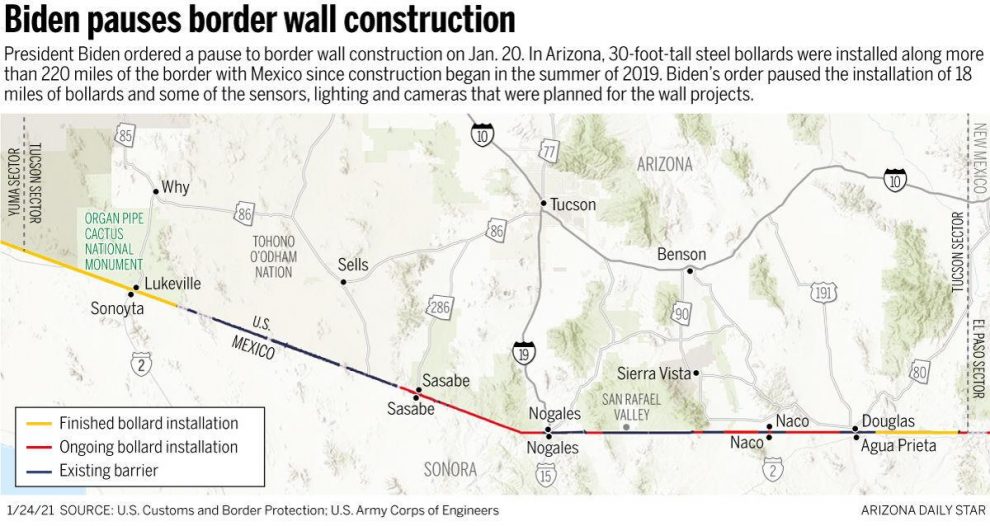 Arizona is suing the Biden administration on claims that its immigration policy, which has allowed record numbers of migrants to enter the country, along with its decision to stop construction on the nation’s border wall, is having a “devastating impact” on the state’s environment, Arizona Attorney General Mark Brnovich said Monday.

“This is a lawsuit that the Sierra Club should love,” Brnovich said on Fox News’ “Fox and Friends.” “In this lawsuit, we allege the Biden administration is violating the National Environmental Protection Act (NEPA), what the left uses to stop highway projects, airport reconstruction, and all that other stuff.”

Arizona, in the third lawsuit it’s filed over Biden’s border actions, says that by stopping wall construction, “they are violating NEPA because it’s allowing more and more people to come into this country,” said Brnovich. “That’s having a devastating impact on our environment and also impacting the increase in population, which will have all sorts of impacts down the road.”

The Biden administration has not done an environmental impact study when it relates to immigration, he added, and that is “violating federal environmental law.”

Brnovich further argued that it has been estimated that every migrant that comes across the desert in Arizona has left behind at least 6 to 8 pounds of waste including plastic bags, drug paraphernalia, backpacks, and more.

“Think about this,” he said. “Anywhere else, if someone said there are 170,000 people leaving each 7 pounds of trash, I’m not a math whiz (but that is) a million pounds of trash in one month. You’d think the people’s heads would explode.”

But with the policy being President Joe Biden’s, “everyone is getting a pass and it’s not right,” said Brnovich.

Other lawsuits, he added, talk about the fact that the Biden administration has “encouraged and incentivized illegal immigration, but “we are saying what they’re doing by stopping the wall construction, by reversing the remain in Mexico policy, they are violating the National Environmental Protection Act.”

Meanwhile, Brnovich said he finds it “very disappointing” that Vice President Kamala Harris, after having been named in charge of handling the diplomatic efforts at the border, had not yet visited the region or observed the issues firsthand.

He said he’s invited her to Arizona but has not heard from her.

“I pointed out in the letter that both of us are first-generation American products of immigration, and are both AGs,” said Brnovich. “I talked about the importance of fighting human trafficking and drug trafficking.”

He added in the letter that “all of us know, whether we are Democrat or Republican, that the cartels make money off every single person crossing that border. We know they are using it right now to dramatically increase fentanyl, coke, heroin.”

Immigration, and illegal drug trafficking, are not only affecting Arizona, but every state nd city in the nation, Brnovich commented to Fox, and “it’s going to become an unmitigated tragedy if we don’t do something now.”

He added that many immigrants come to America because they see it as a nation of laws and a place where “the rule of law means something. It means we are all treated equally.”

And Brnovich said immigrants see the United States as a place where if you “play by the rules, you can get ahead no matter who you are and where you come from,” but the Biden administration has undermined when “they get to pick and choose which laws apply to which people, when they get to unilaterally rewrite federal law and federal regulation. People understand it’s not fair that’s not right.”

He added that the administration’s policy is “not fair to anybody who has played by the rules, as many other immigrants have especially in the past.”

“If we as Republicans articulate and defend our principles, when we talk about the rule of law and how important that consistency is, I think that we win voters regardless of who they are and where they come from,” he concluded.