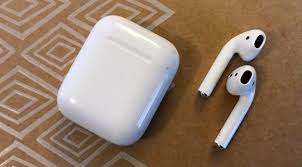 Some 250 have signed the petition, which warns against numerous devices that emit radiofrequency radiation, which is used in WiFi, cellular data and Bluetooth.

AirPods in particular are concerning because they sit deeply enough within the ear canal to emit expose these fragile parts of the ear to dangerous among of radiation, some experts warn.

The scientific jury is still out on the whether or not the particular devices an cause cancer, but animal studies on the kind of radiofrequency radiation that they emit has suggested a link to cancer.

And, in some cases, the levels of radiation found to be carcinogenic were significantly lower than the maximum allowed by federal and international guidelines.

Last year, Apple sold 28 million pairs of its tiny, white wireless earbuds. The year before, they sold 16 million pairs. With a new design reportedly on the way, the technology company is set to profit even more on sound.

But the devices could be pumping more than beats into wearers’ heads.

The AirPods wirelessly connect with a phone via Bluetooth, the popular short distance radio communication technology.