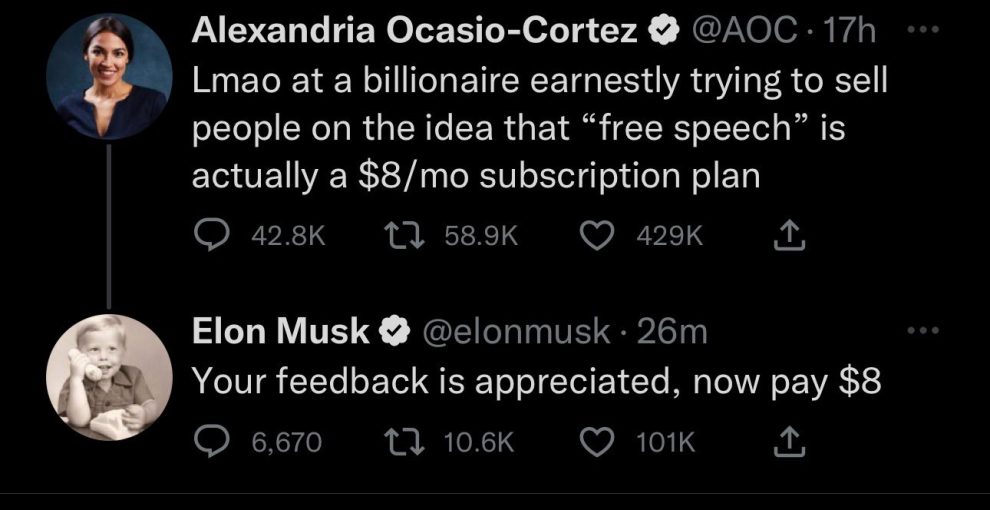 It’s been fun watching Elon Musk’s Twitter takeover and the tantrums that the left has been throwing in response.

Their current fit is over his move to charge for Twitter verification. As we reported, he proposed to charge $8 a month for the blue-check verification and some other special aspects, such as fewer ads.

But folks on the left melted down, including people like Stephen King and David Hogg. Hogg got ratioed for arguing he shouldn’t be charged and that Musk should be paying him for his “content” — some of the most clueless content on the site.

Among the people melting down was Rep. Alexandria Ocasio-Cortez (D-NY), the socialist from New York.

“Lmao at a billionaire earnestly trying to sell people on the idea that “free speech” is actually a $8/mo subscription plan,” AOC declared.

Ocasio-Cortez doesn’t seem to have any understanding of what “free speech” means. It doesn’t mean that you don’t charge for a service. Nothing says anyone has a “right” to a blue check. Why shouldn’t Musk charge for it, if he wants? Plus, getting that money so he’s not reliant on advertising will help him ensure that he can guarantee free speech without being subject to advertiser/liberal/other dictates. That’s something that would benefit all of us, including those of us who don’t give a rap about getting a blue check.

Not only are the leftist meltdowns fun, but the way Elon Musk has been dealing with all the liberal tears has been hilarious as well.

His response to AOC was an instant classic.

Your feedback is appreciated, now pay $8

Some noted that this was something like a tax on the rich (or at least the blue-check folks), something that AOC has called for many times in the past, so why should she have a problem with this?

There were more fun reactions to it.

Your feedback is appreciated, now pay $8