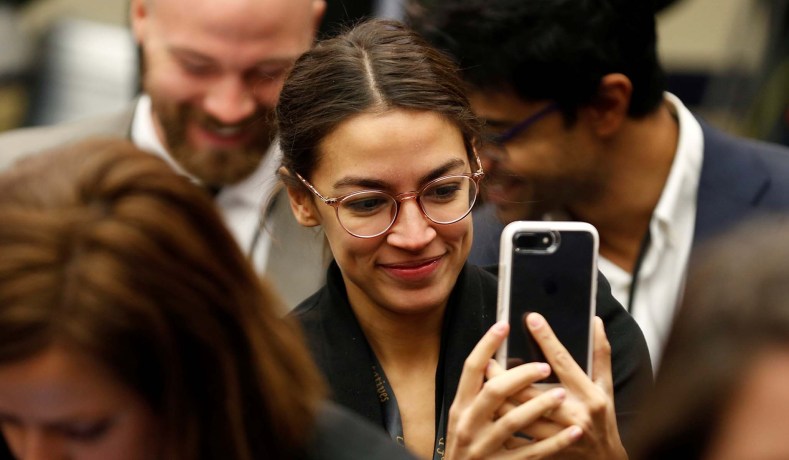 Rep. Alexandria Ocasio-Cortez was quietly dropped as co-manager of a political action committee last week, just days after campaign finance experts questioned whether her role with the outside group was legal.

Justice Democrats, a federal PAC that helped Ocasio-Cortez get elected to Congress last year, quietly filed corporate paperwork removing Ocasio-Cortez as one of the group’s “governors” in Washington, D.C., on Mar. 15, the Daily Caller reported on Monday.

The move came just days after campaign finance lawyers told the Daily Caller that Ocasio-Cortez’s position as a governor of Justice Democrats could be a legal conflict because the PAC also supported her congressional bid.

“If the facts as alleged are true, and a candidate had control over a PAC that was working to get that candidate elected, then that candidate is potentially in very big trouble and may have engaged in multiple violations of federal campaign finance law, including receiving excessive contributions,” former Republican FEC Commissioner Hans von Spakovsky told the outlet.

Ocasio-Cortez’s chief of staff Saikat Chakrabarti, who founded the Justice Democrats PAC, was also removed as a governor on Mar. 15, according to the records filed with the D.C. Department of Consumer and Regulatory Affairs. Current governors now include Justice Democrats Director Alexandra Rojas, Nasim Thompson, and Demond Drummer.

Attorneys for Ocasio-Cortez told Snopes.com in March that the congresswoman left the Justice Democrats board in June 2018. However, the group’s corporate filings indicate that Ocasio-Cortez remained part of its corporate leadership until last Friday.

Ocasio-Cortez and Chakrabarti have been facing scrutiny for their involvement with the Justice Democrats and an associated PAC called Brand New Congress. The groups, which were founded by Chakrabarti, funneled over $1 million into companies controlled by Chakrabarti between 2016 and 2017, the Washington Examiner first reported earlier this month. The National Legal and Policy Center, a government watchdog group, filed a complaint with the Federal Election Commission requesting an investigation into the unusual arrangement.

Justice Democrats also operates a “527 committee,” the same type of soft-money group that Ocasio-Cortez has said she would like to ban through a constitutional amendment, the Washington Examiner reported on Monday.