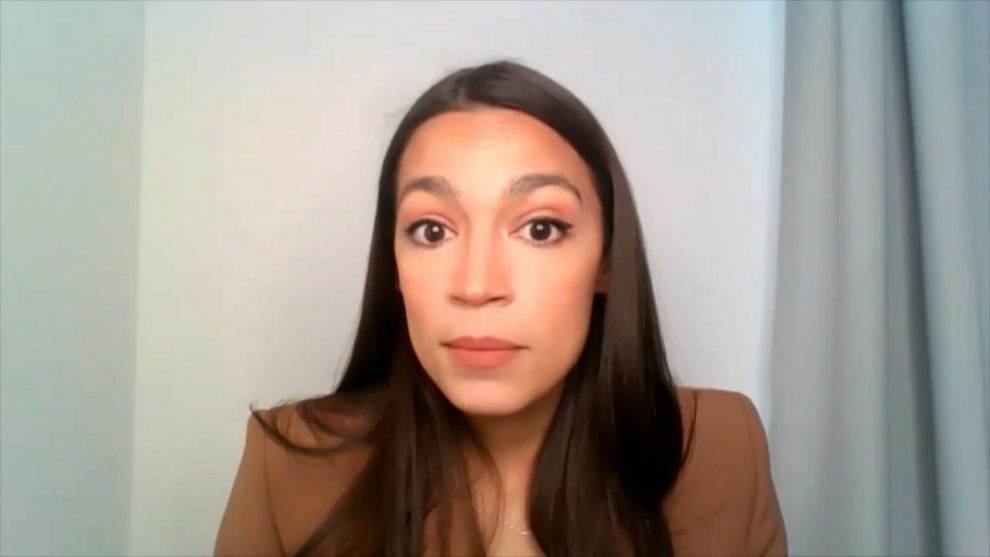 Rep. Alexandria Ocasio-Cortez (D-NY) let loose on Instagram Sunday, on a variety of different issues. If we want to understand why the Democrats have shifted so far to the left, it’s things like the utter vacuousness of people like AOC, who don’t seem to understand the most basic principles of our government. For her, everything is explained through the lens of the evil government (of which she is a part) — and those evil men who control everything.

Ocasio-Cortez chastises Congress for being a corrupt institution, saying it doesn’t only apply to Republicans.

AOC: "It's just really wild to be a person that works in a corrupt institution—which is what Congress is—and to try and be a normal person surrounded by so much decay and moral emptiness … is very difficult." pic.twitter.com/ioLzezmdF4

She’s right on that, but it’s voluntary to be a part of Congress and if she is-in truth-so offended by it, she should quit. As it is, she’s one of the many things that makes it worse, with her horrible takes, bad ideas, and divisive ways.

She says the entire power structure is trying to get you to give up.

AOC: "They are doing everything they can to get you to give up. And that's not just the Republican Party. This is the entire power structure of this country." pic.twitter.com/nejXTVv7Iq

She’s part of the power structure. It’s her party that is acting that way.

But, all the bad stuff is because of those evil men. Shootings are due to the “radicalization” of young men.

Um, yes, trans people have been involved in mass shootings. While it is certainly true that mass shooters tend to be generally men, Democrats seem to have trouble even determining what is a woman — so, I don’t get how suddenly they’re so clear on what a man is.

She goes on to try to blame social media platforms — also run by “men” — for perpetuating “misinformation and violence.” This is quietly funny, as she tries to throw gestures at Mark Zuckerberg as though she’s calling him out and trying to be cool at the same time.

AOC: "Who's in charge of all these platforms that are perpetuating this misinformation and violence? Men … People like Mark Zuckerberg are busy having dinner with Tucker Carlson…" pic.twitter.com/u26D2QBqzR

She also falsely blames Tucker Carlson for “platforming people” whom mass shooters are citing in their own “very clearly written manifestos.” Except that isn’t even close to being reality. She would be appearing to refer to the Buffalo mass shooting that the Democrats immediately tried to blame on Tucker Carlson. Yet, not only didn’t the shooter there ever cite Carlson or his show, he made it clear that he didn’t like Fox and attacked it with an anti-Semitic meme. Talk about misinformation — she was just spreading a lot right there.

The ignorance in this next clip is something else — talking about our “democracy” without seeming to accept we were founded as a constitutional republic, not a pure democracy. The Founders specifically didn’t make us a pure democracy because they saw all the problems with that structure.

.@AOC: "It is becoming increasingly difficult for people to defend the stance that we live in a democracy, in a true one. What the real truth of the matter is […] we're living in oligarchy that has its democratic moments." pic.twitter.com/mnL44aZX0y

She’s upset the presidency isn’t determined by popular vote. She’s upset that the votes of Senators in populous states don’t get more power, and are “still in the minority.”

Read a Constitution. If you can’t support the Constitution that you swore an oath to uphold, step down.

She melts down over gerrymandering that ensures “outsize minority rule” (without noting that Democrats do a lot of outrageous gerrymandering). And it’s Democrats who are in power, so what is she even talking about?

AOC also claimed in a recent Instagram Q&A that meeting American indigenous groups while protesting the Standing Rock Pipeline in North Dakota awakened her to her indigenous background.

‘One of the things that first started awakening and connecting me in a deep to my indigenous heritage was connecting to the Lakota Sioux at Standing Rock,’ Ocasio-Cortez said. [….]

Ocasio-Cortez has cited several different cultures as part of her heritage, claiming to come from European, Jewish and African ancestry.

She told a Hannukah service in 2018 in Queens that her family came from Sephardic Jews who escaped the Spanish Inquisition.

‘As is the story of Puerto Rico, we are a people that are an amalgamation,’ she said. ‘We are no one thing. We are Black; we are indigenous; we are Spanish; we are European.’

She went on in the Instagram Q&A to say that Taino culture has been appropriated by Americans without accreditation, citing the Taino deity ‘Juracan’ of chaos and disorder helping form the root of the word hurricane.

Did she just do a Liz Warren?

She’s just like Joe Biden — all things to all people. Just not a very good legislator.