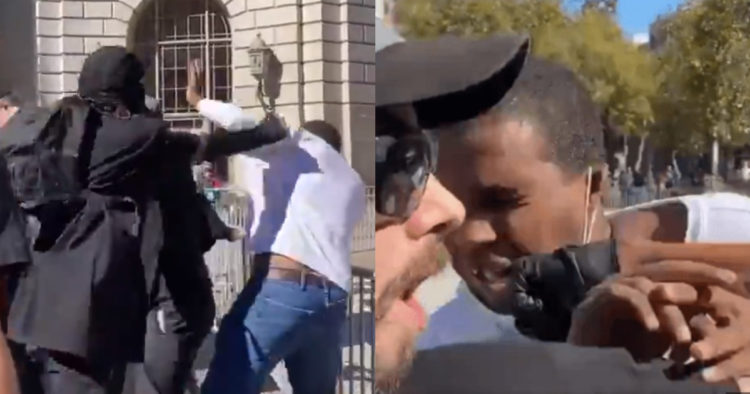 An Antifa counter-protester in San Francisco knocked out the front teeth of a black man who organized the Free Speech Rally and Protest on Saturday. People in the crowd can be heard yelling racial slurs at the man.

Shortly before a Free Speech Rally and Protest in San Francisco, event organizer Philip Anderson can be seen in a video tweeted by Chester Belloc helping a white man walk through an angry counter-protest filled with Antifa anarchists. As they walk through the crowd, a man wearing all black (black bloc) comes up from behind Anderson and punches him in the face.

Anderson recoils from the hit and holds his ear and jaw. A few seconds later, the man moves in again and punches Anderson in the mouth — knocking out his two front teeth. A woman in the background can be heard taunting Anderson, yelling, “Cry about it. Cry about it.”

Causing him to flee the area

The predominantly white Antifa crowd can be heard screaming the “N” word multiple times. “Back up ‘N,’ back up ‘N,’ someone in the crowd yells as Anderson tries to escape the attack. Anderson and the white man he was protecting eventually climb over the police barricade and move to safety behind the police.

Anderson went on to speak at his rally which broke down a short time later when the angry mob became more radicalized and police believed they were no longer safe. Officer eventually packed the Free Speech protesters into a police van and drove them away in a high-speed escape, Breitbart News reported.

From the backseat of the van, Anderson tweeted, “Antifa attacked me for no reason. These people are racist terrorists.”

Antifa attacked me for no reason

These people are racist terrorists pic.twitter.com/B6PqiU5uVv

Later, from a hospital bed, Anderson tweeted a message to former Vice President Joe Biden who famously said “Antifa is an idea” during the presidential debate with President Donald Trump on September 29.

“I have a question for you, Joe Biden,” Anderson said in a tweeted video. “Do you still think Antifa is just an idea? This is what the ‘idea’ you’re talking about, Antifa, this is what they did to me.” He held up his knocked out tooth while a second tooth hangs by a thread.

Joe Biden, do you still think that Antifa is “just an idea” ? pic.twitter.com/UECmU39Tx6

“I want you to answer that question, Joe Biden,” he continued. “Is Antifa just an idea?”