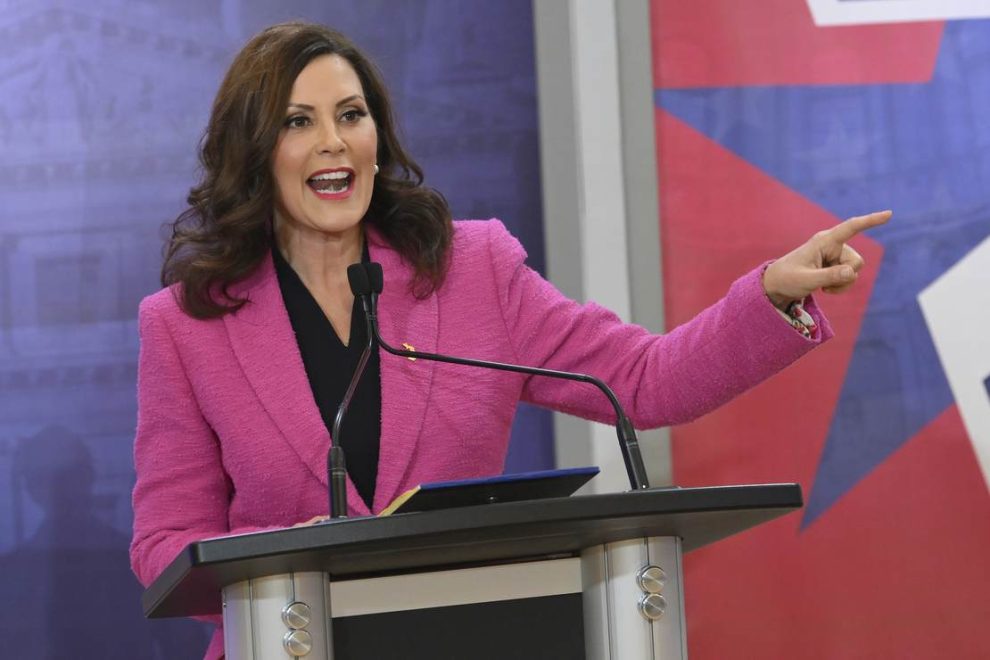 Politicians lie. We see some like Joe Biden lie a lot. He lies as he breathes. During the debates on Tuesday night, we saw more lies from politicians. We saw John Fetterman lie about not being previously against fracking during his debate with Dr. Mehmet Oz for the Pennsylvania Senate seat. We saw Kathy Hochul lie that criminals are facing consequences in New York when the biggest problem is that they are not.

However, we can’t leave out what has to be up there among the biggest lies of the night — the lie from Michigan Gov. Gretchen Whitmer during her debate with Tudor Dixon. Democrats have been trying to run away from their records and their involvement in the COVID school lockdowns now that a lot of the harmful consequences to the education of our children have been confirmed. Whitmer was one of the worst governors in the country for lockdowns.

But listen as Gretchen Whitmer claims that she only kept kids out of schools for three months as she tried to explain why school test scores are plunging.

Gretchen Whitmer: "Mrs. Dixon says I kept students out longer than any other state .. kids were out for 3 months." pic.twitter.com/mSx1Z4P8kL

“Mrs. Dixon says I kept students out longer than any other state…kids were out for three months,” Whitmer claimed, as she smirked.

She’s lucky her tongue didn’t burst into flames because of that lie, it was so enormous. Tudor Dixon didn’t let the lie go by, she nailed Whitmer on it.

.@TudorDixon responds to Whitmer claiming she only closed schools for three months: “Maybe she thinks she can convince YOU that schools were closed for three months, but you know better because your students are the ones that are desperately behind.”

“I’m pretty sure I just heard an audible gasp around town when Gretchen Whitmer said that kids were out of school for three months,” Dixon replied. “Maybe she thinks she can convince YOU that schools were closed for three months, but you know better because your students are the ones that are desperately behind.”

That’s the bottom line. Does she truly think parents will be taken in and don’t know how long their kids were out of school and how badly that affected them? There are lies politicians may be able to slip by, but this is one of those things where the facts show she’s just being demonstrably false. All the people affected are going to let her know it at the voting booth. We saw what a powerful voting block parents have become, particularly in the win of Glenn Youngkin in Virginia last year. She’s already in trouble over her lockdowns and lying about it just makes it worse.

The truth? Whitmer closed schools from March 2020 through April 5. Then, she extended that closure to the rest of the school year into June. Then in the next school year, her Department of Health shut down high schools and colleges again in November 2020.

Because many have short memories, here's the order from Gov. Whitmer and health department in November 2020. Note the first thing under "not open" and this line: "Colleges and high schools may proceed with remote learning, but must end in-person classes." https://t.co/ogUvZnzB47 pic.twitter.com/uyEptagnJo

Jarrett Skorup, communications director for the free-market Mackinac Center for Public Policy in Midland, posted a state health department notice from November 2020 saying that high schools and colleges were closed for in-person learning, while local districts had the option of keeping K-8 schools open.

Yet in tonight’s debate, Whitmer said schools were only closed for 3 months.

The Mackinac Center also noted how bad things were under Whitmer’s leadership.

In fact, Whitmer did not recommend that schools return to in-person instruction until March 2021. When she made that announcement, 23% of Michigan schools were fully in person, compared with 47% in Ohio, 54% in Wisconsin, and 76% in Indiana.

Some of the largest school districts in the state offered only virtual instruction for almost an entire academic year. Michigan was 33rd nationally when it came to offering in-person instruction for the 2020-2021 school year.

The schools in Flint and Detroit were among those closed for in-person instruction the longest. Minority students saw the largest drops in test scores, with the percentage of Black third-graders meeting or exceeding math proficiency standards falling by more than one-third.

On the NAEP, Michigan students dropped in every category. Fourth-grade reading fell to a 30-year low. In Detroit, students in the public school district have long scored the worst in the nation in reading and math. Their test scores still dropped sharply during COVID.

Dixon also took down other harmful aspects of the lockdown such as the nursing home actions.

Seniors died under her nursing home orders, she lost billions of dollars in unemployment fraud, she crushed Michigan’s economy with lockdowns, and thousands of restaurants closed that are never coming back. pic.twitter.com/Fwt6idbAqw

She also took on Whitmer’s harmful policies on energy, including regarding Line 5, which is vital to energy in the area, particularly as we go into the winter. Whitmer claimed that she was trying to keep it open when in fact it was the opposite.

So chalk up one more debate where the Democrat lied and went down in flames, while the Republican acquitted herself well. This race is a close one too, with the two locked at about 48 percent each. So we may be seeing another flip here, particularly with how much Whitmer is despised.