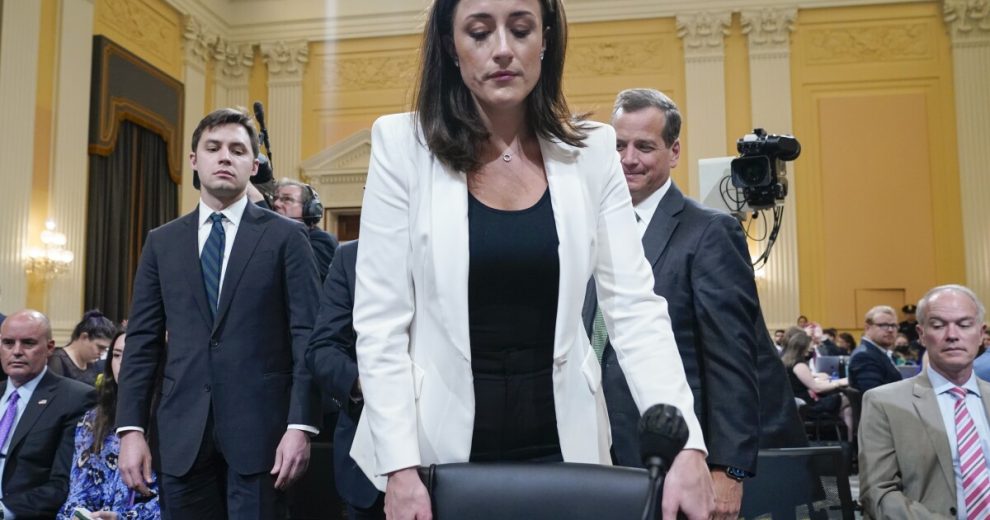 The January 6 Committee appears to have stepped in another political cow pattie.

The committee announced a stop-the-presses, Category-5, DEFCON-level-1 emergency hearing which would feature a witness with such explosive evidence, it would destroy, annihilate, utterly eradicate, and really, really hurt Donald Trump in a way that tales of peeing hookers at the Moscow Ritz Carlton could only hope to do.

Her real name, of course, is Cassidy Hutchinson, which, come to think of it, may be among the few accurate words she uttered when she took the oath to tell the truth, the whole truth, and nothing but the truth. In the words of her attorneys, “she believes that it was her duty and responsibility to provide the committee with her truthful and candid observations of the events surrounding January 6.”

Speaking of “duty and responsibility,” considering that the committee deposed and questioned the former White House aide multiple times, one might think it would have, oh, I dunno, vetted the tripe before serving up a flaming hot pot of Menudo.

The previously unscheduled, emergency! televised hearing starring the brave 25-year-old former aide to former Donald Trump chief-of-staff Mark Meadows was caught in so many, ah, inconsistencies in her story that one could only conclude the committee wanted the inconsistencies to become the official record of what happened at the Capitol on January 6, 2021.

The latest inconsistency may be the most serious one. Hutchinson may have misidentified a Trump Administration DOJ attorney — whose house was subsequently tossed, and all of whose electronics were confiscated by the Department of Justice. All while he was forced to stand outside in his pajamas. Oopsie!

Davis included a page of Hutchinson’s March 2022 testimony, in which she claimed Jeff Clark met frequently with Rudy Giuliani. Hutchinson did not attend the meetings.

Davis wants to get a look at the warrant that gave agents the right to search Davis’s home and seize his property. In a Twitter post, he asked, “did the DOJ Inspector General include Cassidy Hutchinson’s false testimony as evidence when obtaining search warrant for Jeff Clark’s home? Will DOJ release affidavits supporting search warrant? What potential crime are they investigating? Justification for early AM home raid? [sic]”

Davis was provided an email between Washington Post reporter Michael Kranish and Robert J. Costello, the attorney who represented Steve Bannon and Rudy Giuliani and whose electronics were similarly confiscated by the FBI despite attorney-client privilege. The WaPo reporter asked Costello if Giuliani met with Jeff Davis.

WaPo: Did Giuliani ever talk meet with Clark or is that a mistaken identification?

Costello: Mistaken identification. Rudy Giuliani does not believe that he ever met Jeff Clark. Giuliani has been at the White House with Justin Clark which may explain the confusion.

So The Washington Post knows Ms. Hutchinson's testimony is not truthful.

When will WaPo report this?

Of course, the narrative set by “courageous” Cassidy Blasey Ford before the January 6 Committee has not been corrected. They’ve doubled down on it.

I want to speak directly to the… small number who have defied us… and to those who fear Donald Trump and his enablers: because of this courageous woman and others like her, your attempts to hide the truth from the American people will fail.”
– Chair
@BennieGThompson

"I want to speak directly to the… small number who have defied us… and to those who fear Donald Trump and his enablers: because of this courageous woman and others like her, your attempts to hide the truth from the American people will fail."
– Chair @BennieGThompson pic.twitter.com/RyyfnhyY35

Let’s go to the updated Cassidy Blasey Ford tote board.

Hutchinson may have sicced the feds on the wrong guy. Jeff Davis will probably want some answers.

She testified and verified she’d written notes about a passage for a presidential speech, but a White House lawyer said he was the person who wrote it and testified as much to the committee.

She claimed people were seen parading with AR-15s at the president’s speech and near the Capitol surroundings. And not only that, she claimed (sort of) that the president knew about it and was fine with it because he knew they wouldn’t be shooting at him. How did she know there were armed people? Because the Secret Service didn’t want to take down magnetometers to check for them. As former White House Secret Service agent-turned-talk host Dan Bongino told his audience, every president wants to remove magnetometers, because they slow the crowd getting into position for photo ops. If you doubt it, read First Family Detail by Ron Kessler for verification. But only if you can stand reading about Joe Biden swimming nude in front of female agents.

If Republicans — not Nancy Pelosi’s pet poodles — had been allowed on the committee, they may have asked some questions about all of this besides, “Hey, guys, since when is hearsay considered evidence?” Okay, that heifer’s out of the barn, but how about these questions: How many undercover cops would allow open carry of an AR-15 around a president and members of Congress? How many undercover Secret Service, D.C. Police, Capitol cops, FBI agents, and other law enforcement would allow open carry of such weapons near the president and protected Congressional reps? How many undercover cops were there? How many were helping to foment unrest? Why were there no arrests of AR-15-wielding Capitol protesters during the unrest? How do you know? How did the president know? If so, when did he know?

The committee explicated the conclusion they wanted Americans to reach:

Today’s testimony makes clear that Trump wanted to go to the Capitol with the armed mob, despite warnings not to do so from his advisors.

When the Secret Service ruled out the possibility, the former President erupted in anger in the Suburban he was riding in.

Jeff Clark hasn’t commented on the possible case of mistaken identity, but he did mention the early morning door kicking by the feds to Tucker Carlson on the latter’s Fox News program recently. (See it below.)

On Twitter, Clark describes himself as “a former Trump DOJ official who (like you) was concerned about the 2020 election. Now I’m one of the top targets of the politically motivated J6 Committee.”

It’s understandable and not illegal that President Trump wanted to go to the Capitol. He was urged not to go and didn’t. This is not a newsflash. Understandably, Trump was deeply upset by what he considered to be a stolen election. Understandably, Trump thought there was election malfeasance. Ask the Leftists who bought their way into election offices in key states to get out the vote for Joe Biden.— or twisted arms to get unfettered and unchecked mail-in ballots throughout the country, because you can go to the store during COVID-19 but not the ballot box. Can’t have that.

Did Trump act like a petulant child? Probably. That’s not against the law, either.

What should be against the law is this January 6 kangaroo court.