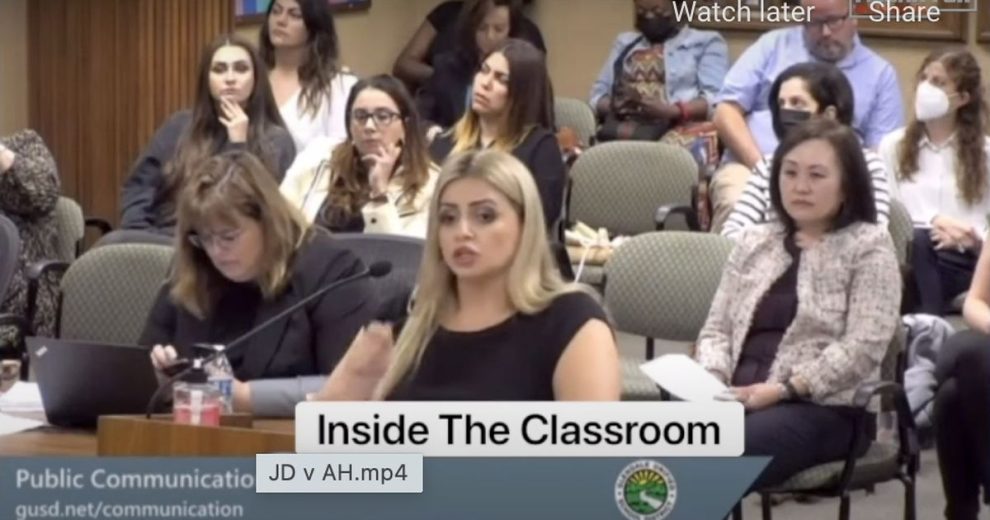 The 2022 “year in review” specials should feature the angry moms of school board meetings. The army of moms standing up against the sexualization of their children by groomer teachers is a defining moment in the culture wars this year. It is happening again in Glendale, Calif. at the Glendale Unified School District, and the board there got an earful at their last meeting after a third-grade teacher, Tammy Tiber, was caught teaching LGBTQ sexuality to 8-year-olds three days a week.

The teacher played several videos for her 8-year-old students that addressed “queer kid stuff,” “pride parades,” “love is love,” and a lesson on Stonewall. One of the videos (below), called Talking to Kids About Pride Month, was pretty disturbing.

A substack set up by the parents investigating the school published their take on it.

The most alarming video that we would like to discuss is “Talking To Kids About Pride Month” with Jessi Cruickshank. In this video, we see the normalization of an adult speaking to children about sexual desires. It desensitizes children to the act of adults talking to them about sexual topics. In the video, the host says, “Jodie Foster is a woman, and she made me question my sexuality when I was a child because I liked her so much. And she was nude in the film ‘Nell.’ Not that I remember watching it several times as a child.”

This video is intended to instruct children about appropriate interpersonal relationships – and what did the child learn? The child learned that it is okay for an adult to talk to a child about watching nude people in movies, and having it affect their sexual desires and sexual arousal. This is normalizing behavior – a known tactic of sexual groomers – that should be a warning sign to parents and children. The behavior observed here is adults talking to children about sexual desires and sexual attraction.

When parents tried to bring the issue up to the teacher, she went behind their backs and plotted to continue teaching the material in spite of the objections. The administration colluded to help her do it.

Parents confronted the school board about the leaked emails and the LGBTQ lessons. Those videos were removed by Twitter when the account that shared them was suspended for unknown reasons. I was able to locate the original videos and have uploaded them to YouTube below.

PJ Media reached out to the Glendale Unified School District but did not receive a response by the time of publishing.

(WARNING: there’s language in the following video from me. I edited out some of it, but this issue makes me very angry and swear-y. Don’t watch in front of kids.)