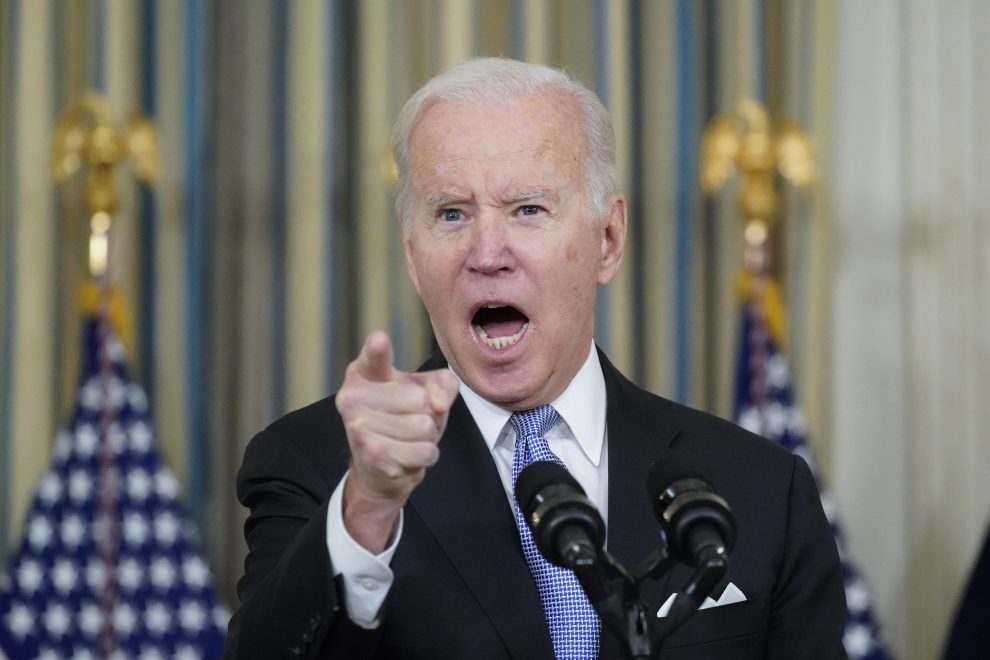 See that angry old man shouting at you? That’s the President of the United States. Even in the best of times, Old Joe Biden has never been one to take responsibility for his actions, and these are not the best of times. With the economy in free fall, the Russians on the march in Ukraine, the Southern border a polite fiction, and skyrocketing inflation, Old Joe is in full-throttle finger-pointing mode, blaming everyone he can think of for the catastrophic failure of his administration. His latest scapegoat: the American people. That’s right, all of us, or at very least those who come to the very sensible and entirely justifiable conclusion that his absurd far-Left policies are responsible for today’s galloping inflation rates.

On Friday, Biden’s handlers trundled the old man to Philadelphia to attend the House Democratic Caucus Issues Conference, where he read out an address full of dark foreboding for the assembled gaggle of socialists: “This off-year election, in my view, may be the most important off-year election in modern history. Because we know what happens, we know the fundamental change that shifts if we lose the House and Senate. The only thing I’ll have then is a veto pen.”

The primary reason why the Democrats may fare poorly in November is, of course, that Biden’s handlers have made a hash of pretty much everything, and with inflation raging out of control and certain to go higher, Biden had a ready explanation: “Make no mistake, inflation is largely the fault of Putin.” Old Joe must thank Gaia every night that Putin invaded Ukraine, as it gives him a ready answer to any and every critic and a potted explanation that will satisfy the Leftist conformists among his followers who know that all the failures of socialism are attributable to anything but socialism.

Since some of the people in the audience, however, might have been sentient beings and might have remembered that prices were already rising before Putin invaded Ukraine. Biden dealt with that head-on, sort of: “I love Republicans saying…Biden’s going to stop the Keystone Pipeline. And I did. And that’s the reason prices went up. Folks, let’s get something straight here: The Keystone Pipeline was two years away and had been 2 per cent finished. Give me a break.”

Modest Old Joe didn’t mention that he did far more than shut down the Keystone Pipeline. He also placed a moratorium on oil leases on federal property (which was blocked in court but is apparently still followed in the Interior Department, as the number of drilling permits it has issued dropped sharply), suspended some existing drilling leases, restricted fracking, placed onerous financial regulations on the oil industry, and more.

Is all that responsible for rising gas prices? Of course, it is. But that idea positively enraged Biden. “I’m sick of this stuff!,” the old man shouted (remember: unfocused and unwarranted anger is a sign of dementia). “We have to talk about it because the American people think the reason for inflation is the government spending more money. Simply. Not. True.”

Joe Biden is furious that Americans blame inflation on his government spending. pic.twitter.com/quRxB2lfvA

When Biden asserts something forcefully, the opposite is almost always true. Former California state assemblyman Chuck Devore explained in November 2021 that “in simple terms, inflation happens because more dollars are chasing relatively fewer goods — there’s only so many goods and services available at a given time and when the number of dollars goes up and more goods and services aren’t produced, then prices start to rise.” Devore adds that “When the government spends money, that money can come from three basic sources: taxes, borrowing, and printing more money.” With Biden’s government spending at astonishingly bloated levels, higher taxes and more money in circulation mean inflation, and here we are.

What’s happening to the American economy is entirely the fault of the old man who is shouting about how sick and tired he is of people saying it’s his fault and of the bright young Leftists with whom he has filled his administration and who are anxious to seize as much of the fruit of the labors of the American people as they can, so as to finance their various utopian boondoggles. It is perhaps a symptom of the deep crisis in American society, or at least of the malignant forces that are operating in America today, that a man so utterly frivolous and irresponsible as Joe Biden would become president and do so in his dotage, bereft of the glib and smiling veneer he put on his dishonest presentations in earlier days. All that is left of him now is the shouting.