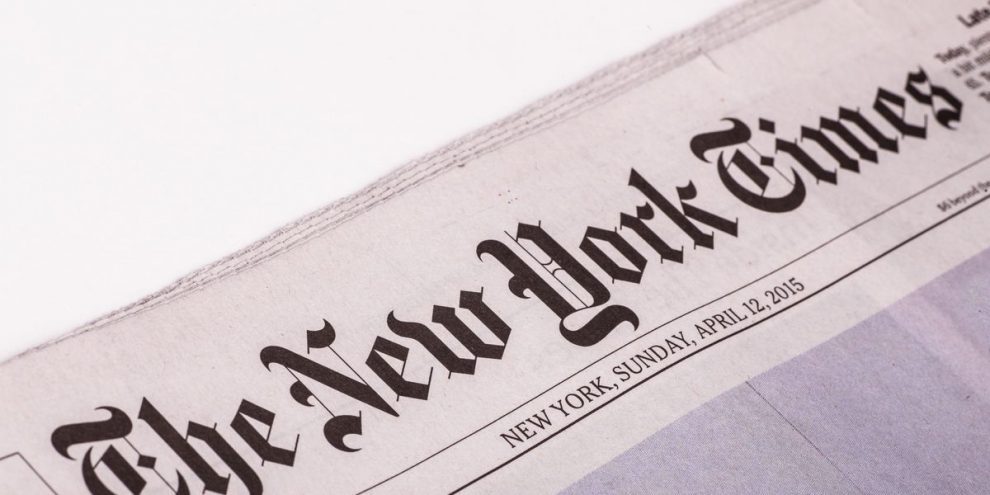 Michael Goodwin of the New York Post published an extensive investigative article on Sunday claiming that ancestral members of the family that owns the New York Times likely included slaveowners.

Moreover, Goodwin recounted, the extended family also included members who fought for the Confederacy; contributed to Confederate memorials after the Civil War; and perhaps even engaged in the slave trade.

The claims cast the Times‘ effort to condemn America for the sins of slavery in an ironic light.

Last Sunday, I recounted that Bertha Levy Ochs, the mother of Times patriarch Adolph S. Ochs, supported the South and slavery. She was caught smuggling medicine to Confederates in a baby carriage and her brother Oscar joined the rebel army.

I have since learned that, according to a family history, Oscar Levy fought alongside two Mississippi cousins, meaning at least three members of Bertha’s family fought for secession.

Ochs reportedly made contributions to rebel memorials, including $1,000 to the enormous Stone Mountain Memorial in Georgia that celebrates Davis, Robert E. Lee and Stonewall Jackson. He made the donation in 1924 so his mother, who died 16 years earlier, could be on the founders’ roll, adding in a letter that “Robert E. Lee was her idol.”

I have found compelling evidence that the uncle Bertha Levy Ochs lived with for several years in Natchez, Miss., before the Civil War owned at least five slaves.

He was her father’s brother and his name was John Mayer because he dropped the surname Levy, according to a family tree compiled by the Ochs-Sulzberger clan some 70 years ago.

Separately, there is also compelling evidence that the brother of a Revolutionary War-era ancestor of the Sulzberger branch of the family was involved in the slave trade.

The Times has gained notoriety in recent months for the “1619 Project,” an effort to rewrite American history by viewing the true origin of the United States as the arrival of the first slave in 1619 — and not with the Declaration of Independence in 1776.

The founding essay of that project won a Pulitzer Prize, though the Times had already corrected its false claim that “one of the primary reasons” for the American Revolution was colonists “wanted to protect the institution of slavery.”

Despite its false foundations, the 1619 Project helped inspired a wave of criticism and destruction of monuments across the country — not just memorials to Confederate leaders, but also to abolitionists, and the Founders of the country itself.

The author of that inaccurate, prize-winning essay, Nikole Hannah-Jones, proudly declared that she was “honored” that the nationwide unrest that erupted after the death of George Floyd in the hands of Minneapolis, Minnesota police on Memorial Day has been called the “1619 Riots.”

The Times has largely celebrated the unrest, leading Goodwin to ask: “[S]houldn’t such breathtaking self-righteousness include the responsibility to lead by example? Shouldn’t the Times first clean out the Confederates in its own closet?”

The Times is a family-owned newspaper. It is published by A.G. Sulzberger, described by the newspaper upon his promotion in 2017 as “the sixth member of the Ochs-Sulzberger family to serve as publisher since its patriarch, Adolph S. Ochs, purchased the paper in a bankruptcy sale in 1896.” The Times added: The Ochs-Sulzberger family, through several trusts, controls about 91 percent of the stock that elects 70 percent of the [New York Times] company’s board members.”

Though it may seem incongruous that members of a Jewish family might have supported the Confederacy or owned slaves, there were some who did so. Judah P. Benjamin, the first Jew elected to the U.S. Senate, held several prominent positions in the Confederate government.

Many Jews actively opposed slavery, and some distinguished themselves in their military service to the Union — including Joseph Pulitzer, the man for whom the Pulitzer Prize is named.