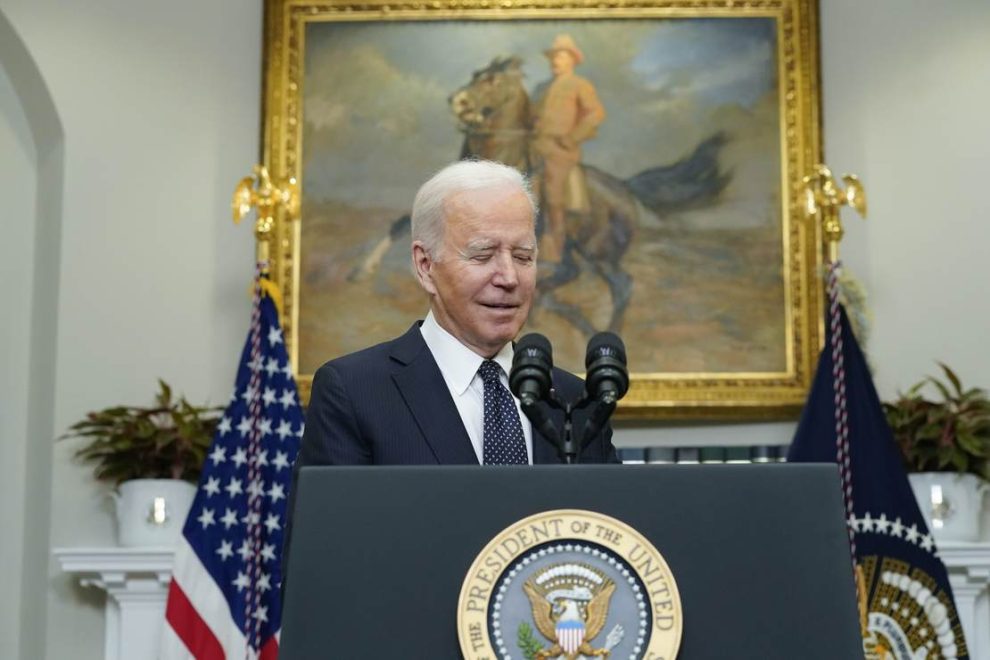 It looked world-historical, but it was just Old Joe having another senior moment: During a Saturday speech in Warsaw, Joe Biden declared, “For God’s sake, this man cannot remain in power,” referring, of course, to Vladimir Putin. As PJM’s Matt Margolis pointed out, “Bill Kristol actually hailed the remark as a historic call to action on par with Ronald Reagan.” Kristol wasn’t alone: The establishment media erupted in a chorus of hosannas for Old Joe, the newly anointed global statesman, until, that is, several key European leaders made it known that they weren’t at all happy with what Joe said and were glad that his handlers walked it back.

Former CBS News White House correspondent Mark Knoller exulted that Biden’s ill-considered exclamation “tops Reagan’s 1987 ‘tear down this wall’ speech.” On MSNBC’s “Morning Joe,” Joe Scarborough insisted that even though the White House had denied that the U.S. is seeking regime change in Russia, Biden’s remark was “a good thing.” Scarborough risibly claimed that Dementia Joe was engaging in “psyops,” and that, consequently, Putin would have to “sleep with one eye open.” Never-Trumper and former conservative, or at least former so-called conservative Jennifer Rubin tweeted: “Biden makes a speech akin to those at the Brandenburg Gate by JFK and Reagan. In a square with a crowd. His delivery is quite strong.”

Larry Sabato of the University of Virginia’s Center for Politics gushed even more unashamedly: “Watching #Biden Warsaw speech. Reminds me of JFK’s ‘Ich bin ein Berliner’ (1963) and Reagan’s ‘Mr. Gorbachev, tear down this wall!’ (1987). Masterful. Now give #Zelenskyy more of everything. #StandWithUkraine”

All these regime-change propagandists who were busy hailing the second coming of Reagan, however, have so far been silent about the fact that Biden’s statesman act went over in Europe like the proverbial lead zeppelin. French President Emmanuel Macron said that Biden’s words were actually counterproductive: “I wouldn’t use those terms, because I continue to speak to President Putin, because what do we want to do collectively? We want to stop the war that Russia launched in Ukraine, without waging war and without escalation.” Preventing an escalation of the conflict has never seemed to be high on Old Joe’s priority list.

German Chancellor Olaf Scholz was no more welcoming of Biden’s regime change call, at least for now. According to the Associated Press, Scholz “said Sunday that neither NATO nor Biden seek regime change in Russia. Asked about Biden’s remarks during an appearance on ARD television, Scholz also said Biden had not made a dangerous mistake. ‘We both agree completely that regime change is not an object and aim of policy that we pursue together,’ the chancellor said.” How making a statement that is completely at odds with settled policy in the middle of a war is not a “dangerous mistake,” Scholz didn’t explain, but he was clear that regime change was not what Germany was after.

Biden himself, however, despite the fact that the White House claimed improbably that he was “not discussing Putin’s power in Russia or regime change,” wasn’t interested in walking anything back. On Monday, Peter Doocy of Fox News asked Biden: “Are you worried that other leaders in the world are going to start to doubt that America is back if some of these big things that you say on the world stage keep getting walked back?”

Old Joe has never heard of such a preposterous thing. “What’s getting walked back?,” he demanded. Doocy explained: “Just in the last couple days it sounded like you told U.S. troops they were going to Ukraine, it sounded like you said it was possible the U.S. would use a chemical weapon, and it sounded like you were calling for regime change in Russia, and we know –”

Biden interrupted: “None of the three occurred.” He then offered an improbable explanation for his statements to the troops, refused to explain his chemical weapons remarks, and didn’t address regime change. This response is unlikely to allay concerns or inspire confidence any more than anything else Joe Biden has done has calmed anything. He claims the NATO allies are closer than ever, but Macron, Scholz, and the Brits don’t seem all that thrilled about his off-the-cuff recklessness. Why are his handlers letting him run around loose?