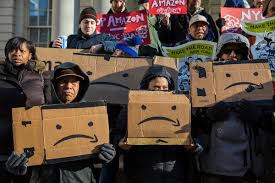 In a stunning development, Amazon said Thursday it will no longer pursue a second headquarters in New York City amid local political opposition.

The change of plans by the world’s largest online retailer comes after reports last week that Amazon was re-evaluating its decision last year to put one of its two new headquarters in Long Island City in Queens.

“After much thought and deliberation, we’ve decided not to move forward with our plans to build a headquarters for Amazon in Long Island City, Queens,” the company said on its website.

“For Amazon, the commitment to build a new headquarters requires positive, collaborative relationships with state and local elected officials who will be supportive over the long-term.”

Amazon was promising to bring between 25,000 to 40,000 jobs to the city, in exchange for up to $3 billion in tax breaks from the state and city governments.