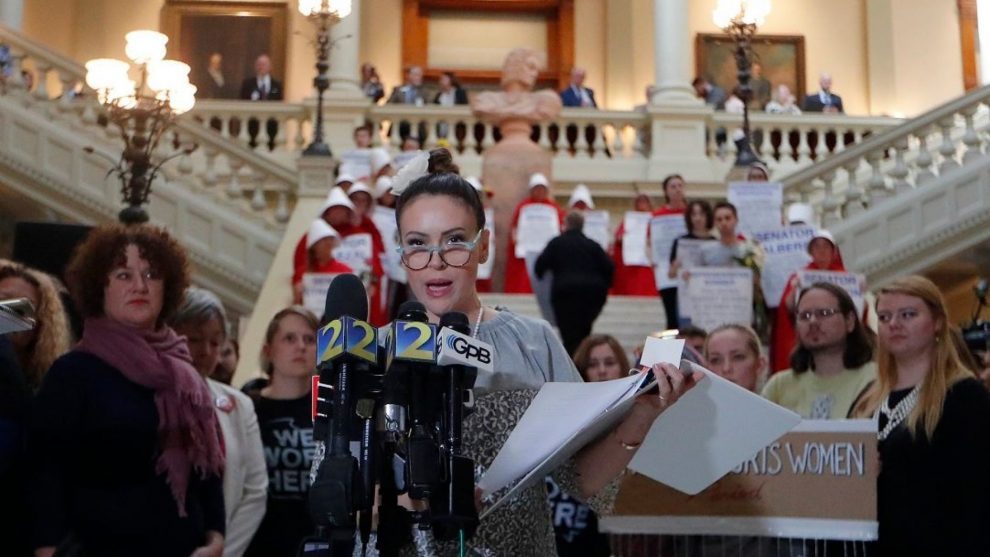 Actress Alyssa Milano and around 30 other Georgia-based film TV and film workers urged Republican Gov. Brian Kemp on Tuesday to veto a “heartbeat” abortion ban that has drawn scorn from Hollywood figures.

Milano — who films her Netflix comedy “Insatiable” in Atlanta — delivered a letter to Kemp’s office in the Statehouse in Atlanta that was signed by other prominent Hollywood actors before speaking out on the bill.

The so-called “Heartbeat” bill would prohibit most abortions in the state after a heartbeat is detected – which can come as early as six weeks, before many women know they are pregnant. It would not apply in the case of rape, incest or if the life of the mother is in danger.

“We are going to do everything in our power to move our industry to a safer state for women if HB 481 becomes law,” Milano said, according to the Atlanta Journal-Constitution.

Last month, she tweeted the bill would “strip women of their bodily autonomy.”

But Georgia state Rep. Dominic LaRiccia, a Republican, confronted Milano outside Kemp’s office and asked which Georgia district she votes in. She replied she is currently working in the state but does not live there.

The legislation was approved last week and is backed by Kemp, who told the Journal-Constitution he won’t be swayed by Milano’s arguments against the proposal.

“I can’t govern because I’m worried about what someone in Hollywood thinks about me,” Kemp told the newspaper. “I ran the last two years on these issues, and I got elected with the largest number of votes in the history of the state of Georgia, and I’m doing what I told people I would do.”

“I can’t govern because I’m worried about what someone in Hollywood thinks about me. I ran the last two years on these issues, and I got elected with the largest number of votes in the history of the state of Georgia.”

Before it passed last week, film and crew members sent letters to production companies HBO, Sony, Disney, universal, Marvel and Netflix, urging them to publicly oppose the bill. Georgia has become a major hub for the film industry because of its generous tax credits.

The state was home to 455 productions last fiscal year, generating $9.5 billion in economic impact and $2.7 billion in direct spending, the paper reported.

These are the men that are voting on what goes on inside my uterus,” Milano said Tuesday.

Milano has become a prominent activist for the #MeToo movement and fierce critic of President Trump. In January, she compared his supporters to members of the Ku Klux Klan, saying “The red MAGA hat is the new white hood.”

During the confirmation hearing for Supreme Court Justice Brett Kavanaugh, Milano supported women who accused him of sexually assaulting them years before.