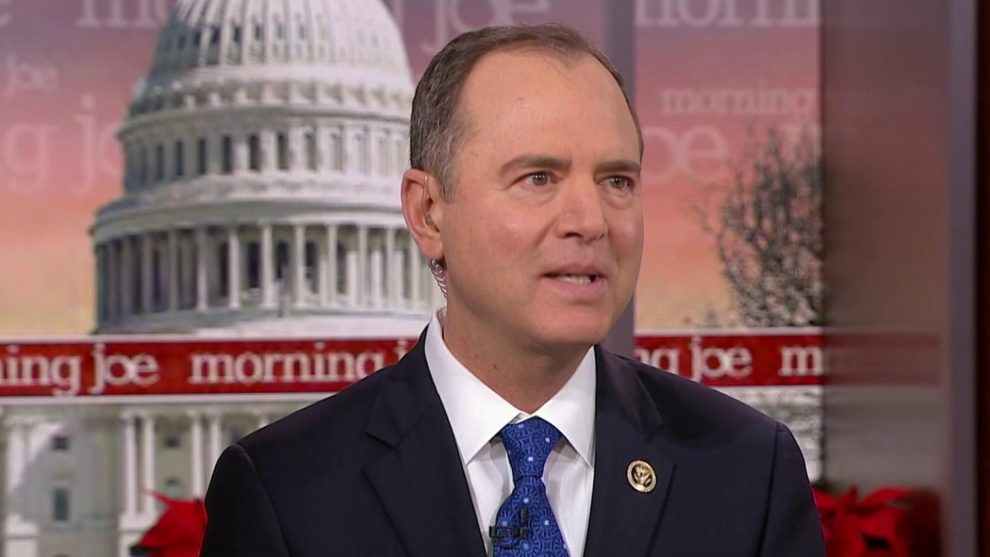 During a segment of MSNBC’s “The Last Word,” Schiff waxed idiotic to self-avowed socialist host Lawrence O’Donnell about House Speaker Kevin McCarthy’s confirmation that he will, as he promised before his election as Speaker, boot Schiff and fellow Californian Eric Swalwell from the House Intelligence Committee, where Schiffty was chairman before Republicans regained control of the chamber, and anti-Semitic Squad member Ilhan Omar (D-Minn.) from the House Foreign Affairs Committee.

Schiff called McCarthy’s conduct “embarrassing, and worse, dangerous.” I know, right? In response to O’Donnell’s question about whether McCarthy will succeed in removing him from House Intel, Schiff said:

Well, he’s certainly going to try and he may very well succeed in doing it, and, you know the tragedy of this is not what he does to me, personally; the tragedy is using the Intelligence Committee as his political plaything to placate Donald Trump, to placate Marjorie Taylor Greene, to exact revenge as you pointed out, for [my role in the] impeachment against Trump in the first trial.

Schiff then got even more ironically hypocritical as he talked about the seriousness of the Intel Committee:

That email you showed your viewers, Lawrence, you got to click on the button to remove me from the committee. You know, this is juvenile, but it has a serious consequence in terms of the functioning of one of the most important committees in Congress.

Where does one start with that complete crock of hypocritical crap? Not sure, but we’ll give it a shot after the short video, below, in which Schiffty cluelessly spews more hypocritical irony than any one politician should spew.

Threats around the world are serious and growing. From Russia and China to the rise of authoritarianism.

But to Kevin McCarthy, the Intelligence Committee is just a political plaything.

His conduct is embarrassing, and worse, dangerous. The American people deserve better. pic.twitter.com/2UMslgmvBK

Schiff seems to have “forgotten” his embarrassing performance during the Democrat-controlled House investigation of the infamous Russia “collusion” hoax when he repeatedly promised smoking-gun evidence that he never produced. Similarly, Schiff declared that the Hunter Biden email scandal had all the markings of a “Russian plot” to discredit Joe Biden. Again, not only zero — but it was precisely the Democrat Party that pressured Twitter to suppress factual news and conservative content about Hunter’s laptop.

As I reported on Saturday, House Republican Rep. Greg Murphy (N.C) unmercifully ripped Schiff, declaring: “You should not be able to lie in Congress,” as he called for an ethics probe, adding that Schiff “wouldn’t know the truth if it slapped him in the face.”

See also  'That 90s Show' Is Everything Wrong With Modern Entertainment

[The Republican-controlled House] needs to do an ethics investigation” of Schiff and his lies — at the minimum. You should not be able to lie in Congress. Adam Schiff wouldn’t know the truth if it slapped him in the face. And the same thing with the other folks — they wanted to push a president [Trump] out and they were willing to use any means — lying, deception, you name it — to push that narrative. And the truth has come out, now, and I hope we hold these guys accountable.

Moreover, as my colleague Sister Toldjah reported on Friday, we learned more about the frequency of Schiff’s office’s requests to Twitter to take action on accounts they (Schiff) didn’t like – including some that hadn’t tweeted anything at all about Schiff. That, gang, is a federal government effort to censor the opposition, regardless of how Schiffty and the Democrats try to twist it.

Adam Schiff might be a target-rich environment cartoon character whose buffoonery undercuts virtually everything he writes, says, and does, but it is Schiff himself who’s the clear and present danger to America, NOT Donald Trump, Kevin McCarthy, and the GOP-controlled House.